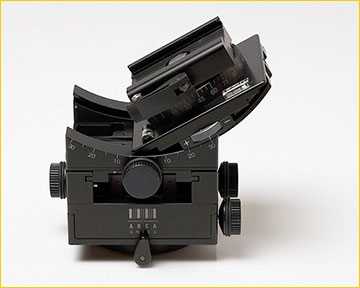 Choosing a tripod head is probably one of the most challenging purchases a photographer can make as it is usually an exercise in balancing tradeoffs. If you want very sturdy it is usually also going to be heavy; if you go for the silky-smooth to operate, that usually means it will be expensive; if you opt for a design that is fast to reposition, then it will often be difficult to make fine adjustments on it. So what do you choose, a pan-tilt, ball or geared head?

The traditional pan-tilt head is what most photographers start with. They are fairly simple affairs so usually not overly expensive and are intuitive to use and easy to adjust on their independent axes. However the average-quality options are not very smooth and often won’t lock down tight enough to hold a heavier DSLR and lens securely. The better ones are certainly sturdy enough and lock down tightly, but they also get heavier and more expensive pretty quickly.

Most photographers serious about getting the best images from their cameras will want to carry their tripod in the field and will usually migrate to a quality ballhead at some point in time. The ballhead’s greatest advantages are they are sturdy for their weight and relatively fast to adjust. While certainly not cheap, there are several quality ballheads available that are strong enough to support a heavy DSLR and lens securely, yet still weigh in at around a reasonably-portable 2 pounds. However, they are not without their own set of drawbacks, the biggest one being the inability to easily fine-tune adjustments on the separate axes independently.

Geared tripod heads have been around for a long time and are popular in studio settings, but they are not particularly well-known to field photographers. They are essentially pan-tilt heads that have one or both axes operated by a crank and worm-gear driven mechanism to move the platform. Because of all the extra metal required for the gear mechanism, they are usually quite heavy. However, they have a few significant advantages which is why they remain the head of choice in a well equipped studio. One advantage is that precise fine adjustments are easily executed with a slight turn of the crank handle. The second is the worm-gear drive is by design essentially self-locking; once positioned with the crank, even excessive force at the platform will not move it. Thus they are superb tools to use for precision work, as they are very solid, fine-tuning is easy and no time is spent locking and unlocking the head for each subsequent adjustment – even with heavy cameras.

Their biggest problem is their weight; many of the studio models weigh nearly 10 pounds! A few years ago, Bogen introduced the 405 geared head which weighed in at a more reasonable 5 pounds, but was only strong enough to support a 15-pound camera outfit. (By comparison a 2-1/2 pound ballhead can pretty easily support 25 pounds of camera or more.) However, this head is fairly popular with large format shooters using the newer selection of lightweight field view cameras as it allows them to rapidly make minor adjustments without the need to lock and unlock the head.

Now there is a new kid on the block, the multi-axis geared Arca Cube. Weighing in at just over 2 pounds, the Arca Cube is about the same weight as a medium ballhead. While Arca does not list a specific weight limit for the head, they say it is designed for up to 8×10 format cameras. Using their own 8×10 camera as an example, and with a reasonable 8×10 lens and film-holder mounted, that outfit is going to weigh in the neighborhood of 20 pounds or more. I had a 15-pound outfit on it earlier and it handled it easily. 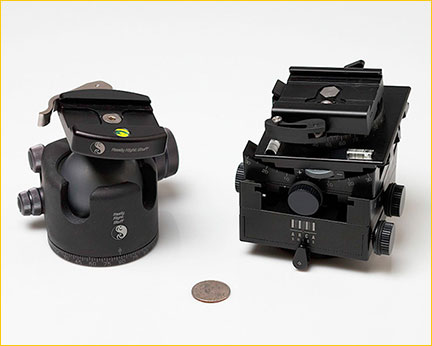 Each axis on the Cube is geared and adjustment knobs are conveniently available on all four sides of the head. The gear mechanism is a rack and pinion design, which definitely saves weight over the worm design, but it isn’t as securely self-locking so Arca added friction adjustments on each axis. The primary geared movements allow plus or minus 30 degrees of adjustment and built-in levels on each axis are readily visible. 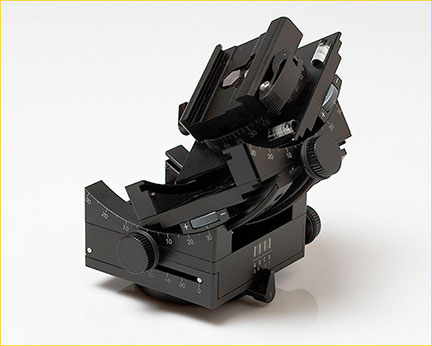 The base is also hinged, which allows another 60 degrees of tilt, permitting the head to tilt over at a full 90 degrees. 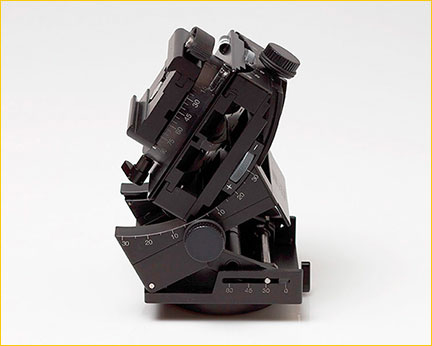 The base of the Cube has pan movement just like a conventional ballhead, but additionally the upper platform has separate pan abilities – more on the benefits of this arrangement later. Both of these pan features are controlled by the small teardrop shaped lever near the base and top of the Cube. The head is topped off by a newly designed Arca adjustable quick-release clamp with built-in safety lock. 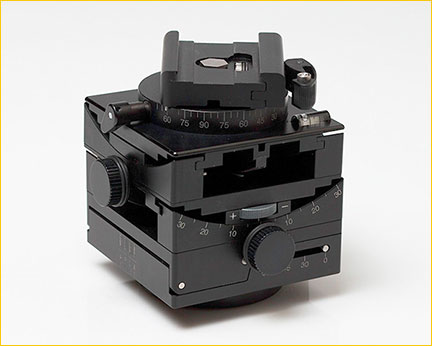 Simply stated, the cube is an absolute pleasure to use in the field! The levels are easy to see and sensitive, so setting the head perfectly level is a breeze and takes only a matter of seconds regardless of tripod positioning. Turn the knob in the direction you want the bubble to move, centering the bubbles and presto, you’re done! With the head leveled, the camera is level, so the hot-shoe bubble-level is now a superfluous accessory.

One of the things I regularly do in the field is capture a series of images for later stitching together into a larger final image. There are two methods I use to accomplish this. The primary is the flat-stitch using a shift or “PC” lens mounted on the camera, where the camera is shifted relative to the lens in such a manner that the lens remains stationary thus avoiding parallax between near and far subjects in the image. See my article coveringStitching Techniquesor Digital Outback Photo’s stitch article for more details on this technique.

The other method is the pan or spherical stitch, which overcomes parallax by pivoting the lens around the lens’ optical center or “nodal point” as the images are captured. While I personally prefer the flat-stitch whenever possible and don’t do the spherical style often, it is the more common method used by most photographers. One of the main requirements to a successful spherical stitch capture is having the camera perfectly level during the pan. Here is where having the upper platform of your tripod head being able to pan separately from the base is a huge benefit, since it is far easier to level the head itself than it is to level the combination of tripod legs and head that a conventional tripod head requires. Other companies like Really Right Stuff offer panning clamp options for their heads, so while this is ability is not unique to the Arca Cube it is certainly a welcome feature in any quality head.

Note: A sliding rail assembly, like the Kirk geared rail plate shown in the photo below, is a useful accessory for accurately positioning the camera relative to the head while performing either the flat or spherical captures. 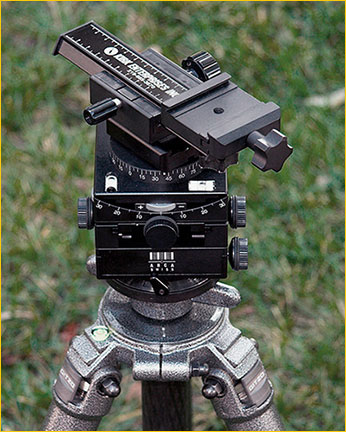 I do have a few complaints with the Arca. The first is simply the price. This head is ridiculously expensive at its retail price of $1,499. It does come packaged with a fancy leather carrying case, though why remains a puzzle to me since I don’t know anybody that carries their tripod head separate from their tripod… Maybe I’m exposing my lack of certain etiquettes, but personally I would have rather had a padded wrap supplied instead. I assume Arca feels the useless leather case somehow helps justify the Tiffany’s price-tag.

Second, mine was delivered with a defective quick release clamp lever. Actually it was not defective per se, just not properly machined. When fully open, the jaws of the quick-release clamp would not open enough to allow easy insertion or removal of the camera or lens plates. The clamp is adjustable, so opening it up to the point where the plates slid in and out easily then prevented the same from being securely locked when the clamp was closed. There was simply not enough throw on the cam lever to accommodate easy plate entry and removal and at the same time allow a tight lock-up. Arca as a company while known for its high-quality view cameras and tripod heads is also known in those same circles for its notoriously slow customer service. To wit they do not have any website, nor do they publish any telephone number for customer service. Hence, if you have a question or a problem you must deal with them via conventional mail or email. Knowing it might take months to have this relatively simple problem rectified, I had the lever’s cam surface re-machined locally so the jaws opened more fully. The lever is made of a high-grade thermal plastic – probably Delrin – so it was a simple fix and the clamp now works as it should. There are outlines in red on the image below that shows the modification that needed to be made. For as much as this head costs, in my opinion it should be delivered from the factory in perfect operating condition; this is simply an unacceptable problem to have on such a high-priced item. 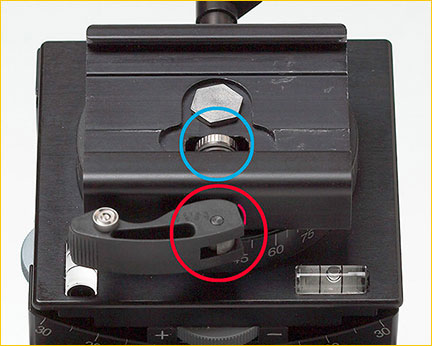 The red shows the area that needed to be removed for the clamp to operate properly.
The knob outlined in blue adjusts the spread and tensioning of the clamp.

As a final aside, I also received a surprise from the retailer I purchased the head from,B&H Photo Video in New York. When I called them for a return authorization to get the defective head replaced, they informed me that this particular item was non-returnable! B&H claims they had a note by the item saying it was non-returnable and in fact on a secondary page describing the head they do, but it is not very prominent and I missed it when I placed my original order. Moreover, there was no warning anywhere during the checkout process that the item was not returnable. At any rate, when I pay $1,500 for something, I expect it work as promised and at the very least replaced if it is defective.

While he considers himself a “Fine Art / Landscape” photographer, Jack has photographed for commercial and corporate clients, led several fine-art photographic workshops, and instructed novice through advanced photographers in a variety of photographic venues. Jack began in the 80’s using medium format and 4×5 film cameras, but has migrated to the digital workflow and primarily uses Canon digital SLR’s for capture and Epson Wide-Format printers for output. Jack presently resides in Los Altos, California and his images have been exhibited in galleries from California to New York.

A link to some of Jack’s images taken on a recent trip to Italy, all shot with a Canon 1D MKII.

While he considers himself a “Fine Art / Landscape” photographer, Jack has photographed for commercial and corporate clients, led several fine-art photographic workshops, and instructed novice through advan... [ Author’s Page and Articles ]

While he considers himself a “Fine Art / Landscape” photographer, Jack has photographed for commercial and corporate clients, led several fine-art photographic workshops, and instructed novice through advan... [ Author’s Page and Articles ]