This article first appeared in the Nov/Dec 2001 issue of Photo Techniquesmagazine. It has been edited slightly for style from its original form. All equipment photographs are courtesy of their respective manufacturers.

Please note that this review is based on cameras that were generally available in the third quarter of 2001. Given the rapid rate of change in this industry it will undoubtedly become dated very quickly. 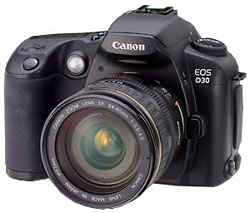 When Canon’s first digital SLR appeared in the fall of 2000 it more than satisfied the pent-up desires of Canon owners. Finally they had a digital camera worthy of their lenses. The D30 uses a CMOS imaging chip, a first for a high-end digital camera. It straddles the line at being a pro-level camera in terms of image quality yet is at a price level closer to what the serious amateur can afford.

Featuring a 3.3 megapixel chip, the D30 is capable of producing prints up to 8X10″ in size that rival those from scanned color film. In fact, in terms of freedom from grain (noise) and color purity the D30 is in many ways superior to film. Many users find that even at ISO settings as high as 400, noise from the CMOS chip is quite low, and usable images can even be created at speeds as high as ISO 1600.

Using a 1GB IBM Microdrives approximately 300 frames can be stored in the highest resolution RAW mode, and a thousand or more frames at the lower resolution JPG resolution levels. Extremely low battery draw helps makes possible this many shots, especially if the optional 2-battery grip is installed.

Unfortunately, as good as the image quality is the camera is somewhat let down by autofocus performance that isn’­t at a level with other current Canon cameras. While not theEOS 1D,  the D30 is one of the yearÃ­s finest digital cameras. 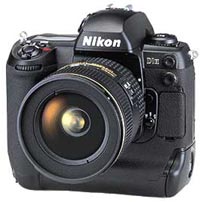 Building on its success in 1999 with the original D1, in early 2001 Nikon introduced the D1x, with greater resolution and a number of enhanced capabilities. It features a 5.4 Megapixel chip, though the resolution increase is only on the horizontal axis. The vertical resolution remains the same as the original D1 and the full increase in image size is achieved though a form of interpolation.

Notwithstanding this, image quality and resolution are outstanding, a significant improvement in both areas over the D1. ThereÃ­s hardly anything that this camera doesnÃ­t do well. Autofocus is fast, and most importantly for a digital SLR, turn-on and shooting response are each as fast as that of a film camera.

Speed and flexibility are enhanced through the use of a Firewire (IEEE 1394) interface and the camera now “officially” supports the 512MB and 1GB Microdrives. Build quality and ruggedness are also nothing short of first-rate. The D1x, like its predecessor, is built on a chassis that is a hybrid cross between an F4 and an F100 and the all-metal body has a high degree of resistance to dust and moisture.

And, to put icing on the cake, you can even attach a GPS receiver and record location data, though there is still no audio note recording capability as exists on some KodakÃ­s high-end digital SLRs. 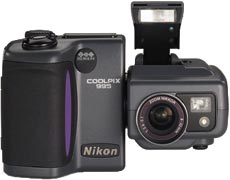 One of last year’s winners, the Nikon Coolpix 990, is back this year in a new guise. Though the imaging chip is the same 3.34 megapixel CCD, there have been a number of worthwhile improvements that make the 995 one of the most appealing amateur digital cameras around. New to this model is an f/2.5 zoom lens with broader focal length coverage (38mm – 152mm equivalent), and a repositioned built-in flash that dramatically reduces red-eye. The shutter speed now tops out at 1/2300 second and the maximum ISO is now 800, rather than 400. Of interest to anyone doing nighttime photography is a new Noise Reduction mode. Finally, instead of using ubiquitous AA batteries the 995 now ships with a rechargeable Li-ion battery and charger. 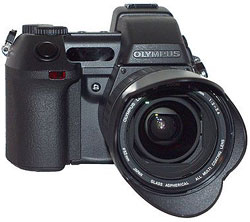 With the E-10 Olympus has hit a home run. When introduced earlier this year the E-10 was the first 4 Megapixel SLR on the market.

There are two main areas in which the E-10 differs from cameras like the Nikon D1x and Canon D30. Instead of an instant-return mirror it uses a beam splitting prism. It also does not have interchangeable lenses, instead utilizing a purpose built 4X zoom.   While I prefer interchangeable lenses, there are good arguments against them for digital cameras, the main ones being that it prevents dust from being attracted to the CDD chip and also that the lens can be optimized for the requirements of digital imaging.

Smart Media cards can be used, but unfortunately Type II Microdrives aren’t supported. On the plus side of the ledger is that the camera is able to use AA batteries, though plan on having a pocketful handy; itÃ­s a battery eater. Replaceable Lithium CR-3V batteries are also accepted and they do give better life.

The E10 is a very solidly built camera. Image output is very good indeed and the controls and interface are easy to learn and comfortable to use. There are some contradictions though. While the camera responds quickly some of its software functions (such as image handling and turn-on delay) are not as fast as they should be. 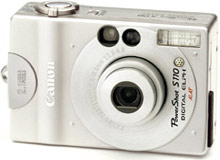 Small is beautiful, and in the S110 Canon has produced a 2.1 Megapixel pocket digital camera that answers the need of anyone needing a petite yet competent snapshot camera. This is the latest iteration of CanonÃ­s Elph design in digital guise. In addition to its small size and decent image quality its jewel-like finish simply adds to the appeal.

Not much bigger than the Compact Flash card that it takes the S110 has a built-in flash, a bright LCD panel on the rear and a 2:1 ratio zoom lens. There is even a movie mode, which in its low-resolution setting is capable of 30-second video segments with audio. Not bad for a digital camera that fits handily in a shirt pocket.