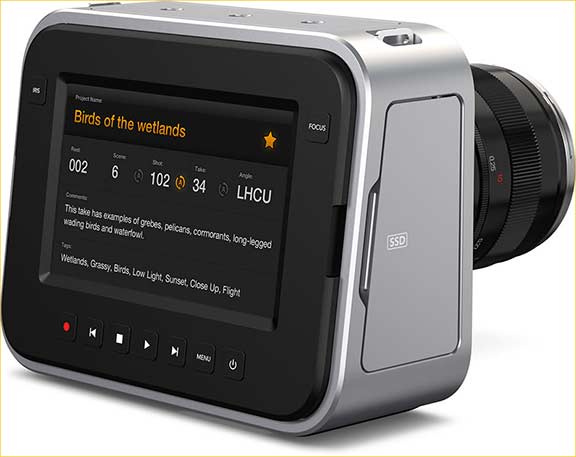 Imagine if your DSLR, and indeed all affordable cameras had very small sensors, and could only shoot JPGs;
highly compressed and in a limited colour space. Imagine if only very expensive medium format cameras could shoot raw with large sensors.

That’s been the case till recently in the world of video. Small sensors, no depth of field to speak of,
restricted colour space, and baked JPG type images. Not a pretty picture – literally.

Now a small Australian company, Blackmagic, has a series of moderately priced cameras that can shoot raw video.
There’s nothing for under $15,000 from any other company that can shoot raw video. RED’s Scarlet is in that price range
when equipped with enough accessories to become a functioning camera, and offerings from Sony
and Canon cost even more. Find out what the fuss is in the article below.

If you’re a regular reader, and interested in things video and cinema, you’ll know that Chris and I produce quite a bit of video content for this site, both tutorials and travel pieces. We are about to upgrade from our current Panasonic AF100, GH2 and GH3 to the newBlackmagic 4K Production Cinema cameras, as discussed in my recent  Does 4K Matterarticle.

Wanting to get up to speed on the Blackmagic cameras as soon as possible, and with the recent drop in price on the 2.5K and EF mount versions to $1,995, we decided to buy one, ahead of our 4K cameras which are likely still a couple of months away. We have now spent some days shooting and becoming familiar with the camera as well as the range of accessories which we are putting together to work with our 4Ks when they come. Most of these have arrived in dribs and drabs over the past weeks.

Operationally, the 4K camera, called the BMPC and thecurrent 2.5K camera, the BMCC,are almost identical. Indeed all three models, including the pocket cameras (BMPC) have the same operating system; a firmware update is a single download. The main differences between the BMCC and the BMPC are beneath the surface; mainly, a 4K sensor instead of 2.5K. Along with the sensor chage there will be a global shutter (no more rolling shutter effect), and a larger sensor – Super 35mm size rather than sub-MFT. The gains are counterbalanced by a loss of 1 stop of dynamic range, from 13 stops to 12 stops. As we’ll see, not a serious tradeoff for the advantages offered.

The above video is

not intended to show any aspect of the technical quality of the BMCC
but rather is simply a spontaneous response and first impressions. Quick and dirty, in other words.
Don’t take it too seriously.

Made seemingly from a solid aluminum shell, theBMCCfeels good in the hand. But it’s almost impossible to shoot with it hand-held without a grip or rig of some sort.

The large rear touch screen is responsive and the entire interface shows thought, and displays design integrity. Unlike so many cameras that need a 300+ page manual to figure out, the Blackmagic cameras does not. It hardly needs one at all, it’s that straightforward. It is the embodiment of the Bauhaus design philosophy –form follows function.

In many ways, with its large screen, it reminds me of using a view camera. It’s form factor lends itself to a slower and more contemplative use than does a handycam. This theme is carried through by the need for accessories; external battery, handle, cages and grips, EVF, microphone etc. As much as one would want this camera to be hand-held – and it can be in some circumstances – it really is intended for tripod use and will fight you every step of the way if you try and use it otherwise.

The BMCC comes in two different lens mounts. The original Canon EF mount, which offers aperture control and stabilization support, if the lens has IS, and also a new Micro Four Thirds mount (MFT) version, which is completely passive. No electrical connections whatsoever. What can be confusing is that the Pocket Camera (BMPC) also has an MFT mount but it is Active, supporting IS lens, aperture and focus. Why BMPC has an active MFT mount while the BMCC in MFT mount is passive, is a mystery, especially considering that the two cameras were announced very close together.

Be that as it may, with the MFT mount one can use just about any lens ever made via adaptors. Canon EF, Nikon F, Nikon G, Leica M, Leica R and on and on. If your legacy lenses don’t have physical aperture rings, then there are mount adaptors available that simulate them.

But, the ironic thing is that native MFT mount lenses from Panasonic and Olympus won’t work at all because they require electronic control of the iris and also almost all of them have so-called fly-by-wire focusing. Since the MFT mount BMCC is passive, even focusing one of these lenses is out. Various third party native MFT mount lenses, such as those from Voigtlander, will work fine. Just about any lens that has a physical aperture ring and direct manual focusing capability will, usually with the proper adaptor.

Focusing on theMFT modelis completely manual, but there are two focus aids. A button marked Focus turns on Peaking, and double tapping the screen magnifies the image to 1:1. Between these two aids, focusing is pretty simple and straightforward.

Because the camera has 13 stops of dynamic range and does not have any form of exposure metering other than Zebras, setting proper exposure can be frustrating. Adding a real-time histogram would be really helpful, but for reasons beyond human ken Blackmagic has foregone this luxury.

What works for me is to shoot raw, whike setting the rear LCD to view in Video mode. This means that your file will be very flat looking, and have massive DR, but will look “normal” on the camera’s LCD. With this camera I set my Zebras for 85% and always stay well under any indication of clipping. The reason for this is that one of the channels may clip before the others, and it is my understanding that it isn’t until all three channels are clipped that the Zebras show.

Many people use ETTR to shoot raw with the BM cameras, and while technically appropriate, it can be overkill. Footage will come into DavInci looking extremely overexposed, and reviewing clips becomes a tedious process of having to correct every file, even if they are not ones that are going to be used. Unless the scene has huge dynamic range I simply adjust the aperture or fader till Zebras disappear, and then pull the exposure slightly downward until it looks “normal” on screen. Note that this method only works if you are shooting raw in log mode yet viewing the rear LCD in Video mode.

Sadly, there are issues with the BMCC audio. First among them is that while there is a built-in mic, it mostly picks up camera fan noise. It is barely usable as a sync track, and definitely for nothing else. But, that’s not the real issue.There are no audio meters. There are two input jacks (1/4″ phono jack) and a level control, and the ability to switch between Line and Mic level, etc; but no meters.WTF!Who at Blackmagic allowed this? People have been bitching about it since the first cameras were announced but it has never been addressed in a firmware update. While one can give the video portion of this camera an A, the audio gets a D –must improve before term-end, or getting flunked is a certainty.

This short film was produced over a weekend, based on an idea by Joshua Michael.
It was shot with the BMCC, MFT mount version, with a selection of
Bower Cine, Nikon and Zeiss lenses.

I have little but praise for the camera’s video quality. It’s lowest performance mode is ProRes HQ at 220Mpbs!! It can shoot either in log mode or the REC709 colour space in this mode. This simply puts to shame any other camera on the market below a RED, because they all shoot compressed video. With an external recorder some cameras can shoot uncompressed ProRes, but few if any in log mode for less than about $15,000.

Then, of course, there’s raw mode. Shooting Cinema DNG provides all the freedom to grade, color correct and adjust the image file as needed without worrying about compression artifacts, banding and other nasties. Of course these raw files cannot be used without debayering and deliniearizing, just as with any raw file. The tool of choice for this is DaVinci Resolve, a copy of which is provided, along with a security dongle. The free Lite version can’t be used because anything over 1920X1080 isn’t supported, and this camera produces 2.5K footage. This full version supports up to 4K, and also can handle RED and Ari Alexa files among others.

The Blackmagic Cinema Camera’s image quality is simply amazing. If you’ve been shooting video / cinema with any other camera (DSLR or camcorder) that costs less than $20,000, you won’t believe how good the BMCC is. And when you add the fact that either the EF or MFT version now costs under $2,000 and you get the full version of DaVinci Resolve that retails for $1,000 included, it’s nothing less than a steal.

Of course you have to add lenses, but you do with any camera. You have to add memory cards, but you do with any camera, and of course you’ll need to add some audio gear and other accessories. But, if you want the cinema camera equivalent of medium format for the price of a consumer DSLR, the BMCC is the only game in town. With the 2.5K BMCC this good I can only imagine what the 4K will be like, with its higher resolution, global shutter and larger sensor, all for just a $2,000 premium.

There’s much more to say, but I’ll hold off until our 4K cameras arrive, hopefully some time in the next couple of months. By that time we’ll have a lot more experience with the 2.5K BMCC under our belts, and also all of of our accessory gear will be in place, so we’ll be able to report on how things all come together.

Of all the tools available in digital image processing none causes more confusion than the use ofUnsharp Masking. I believe that this is in large