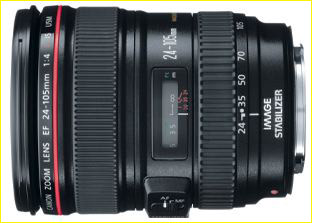 The new lens is noticeably smaller and lighter than the 24-70 mm., although its front element is about the same diameter. It is a more conventional zoom in that it extends with the focal length; the 24-70 mm gets longer as the focal length gets shorter, which makes its lens shade, fixed to the mount and not the end of the lens, more effective.

At the rear of the new lens is rectangular baffle, presumably to reduce any reflections from the parts of the rear element which are not used to form the 24 by 36 mm rectangular image.

Both lenses are classic “L” construction – heavy, solid, smooth and sealed against the elements. 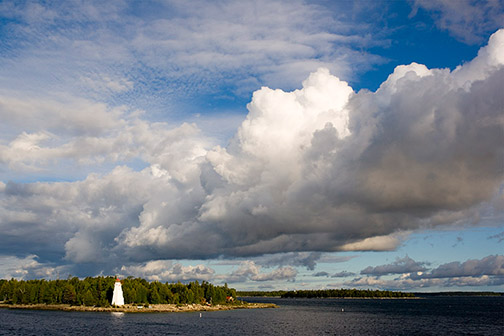 Please note that I don’t test lenses with resolution charts – I’ve got them and I’ve used them, but I find practical testing on the sort of subjects I usually photograph far more useful in reaching conclusions about lens performance for my purposes.

Here are my findings as seen on my Apple Cinema Display.

I live on Georgian Bay, part of Lake Huron, and have a flat horizon to the north-east. I shot the sky with the horizon (the lake) close to the bottom of the picture.

There is virtually no observable vignetting from the 24-70 mm lens at any focal length with f4 or smaller apertures. The new lens, on the other hand, has quite pronounced vignetting at 24 mm and f4, which is still apparent at f8. (It’s easily correctable in Camera Raw, which is just as well.)

However, there is no vignetting of any significance at any other focal length or aperture. The new lens only offends at the widest angles.

For all intents and purposes, both these are superb lenses and there is very little difference in their practical resolution.

At 24 mm the 24-105 mm lens is definitely better at the edges at f4 and f5.6. This finding is slightly surprising to me as f4 is the maximum aperture for the 24-105 mm lens, whereas the 24-70 mm is stopped down by one stop. By f8 the lenses are hard to tell apart. They are equally good at the centre.

At 35 mm the lenses are practically identical and I’d only give a very slight edge to the new lens, and only at f4. The difference is more one of contrast than resolution, to my eyes. The 24 -70 mm seems to have just a teeny bit of flare around small details.

At 50 mm the same applies; a tad better contrast from the new lens but otherwise it’s hard to discern any difference.

At 70 mm I can’t tell any difference between the two lenses.

In addition to eye-balling the screen with the pictures at 100%, I made a couple of 16 by 20 inch prints at the highest resolution my Epson 4000 can muster. I cannot see any difference in the results. From the point of view of a practical, working photographer, as opposed to an optical physicist working on a sophisticated bench, these lenses are essentially identical in their resolution.

If there has to be a winner here, it’s the 24-105 mm lens on account of higher contrast. The baffle mentioned above appears quite effective. I also feel that f4 is a very practical aperture for this lens, even though it’s then wide open. 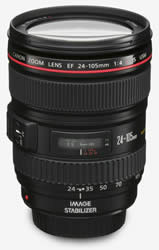 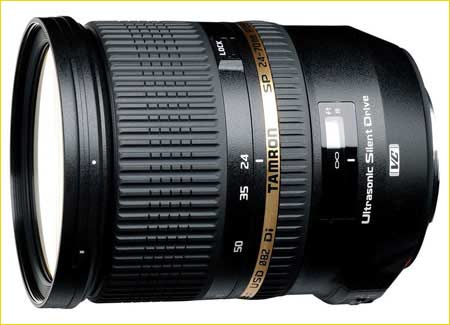 Although I’d normally use a macro lens for serious close-up work, one occasionally runs across a scene in the field where macro capabilities are needed, but one didn’t bring the macro lens. Although a purist would say that without 1:1 capabilities these are not in the macro range, both these lenses perform quite credibly in tight close-ups.

The 24-70 mm lens has a slight edge in image size, giving a 0.29 magnification, while the 24-105 mm manages 0.23. This doesn’t sound much different but actually I was quite surprised at the difference in practice. I was very gratified, though, with the IS when working close-up with the 24-105 mm. (Which reminds me – Canon, how about a 100 mm macro lens with IS?).

For action photography, where speed is important, the full extra stop of the 24-70 mm f2.8 lens clearly gives it the edge. The IS of the new lens may give you up to three stops in hand-holding, but that doesn’t help you freeze motion.

On the other hand, the IS does give you those extra stops for low light or extended depth of field.

Finally, the new lens gives you a 50% larger image at its 105 mm long end. While I didn’t compare its resolution with any other lens at that focal length, I have no doubt it would hold up very well.

I’m a nature and wildlife photographer. Linear distortion is not a big deal most of the time, and vignetting is easily compensated for in Camera Raw.

On the other hand, weight and size are issues that interest me, my neck and my back! And as I age, I find IS increasingly valuable even at modest focal lengths. So for me, the new lens is a no-brainer, especially when I don’t have to accept any less resolution, – and I get an extra 35 mm of reach!

Bill Caulfeild-Browne is a semi-retired business executive who lives in Tobermory, Ontario. A dedicated nature photographer, he has had three one-man exhibitions in Mississauga and Toronto and has contributed to numerous magazines and books, including the World Wildlife Fund’s "Endangered Spaces" and "A Nature Guide to Ontario". He loves to travel, and has recently visited the Galapagos and Antarctica. He is a member of the Board of the Nature Conservancy of Canada.

Bill has contributed several product reviews to this site over the past few years.

An Afterward
By: Michael Reichmann

For me lenses are a much more fascinating aspect of photographic equipment than cameras. True, digital cameras now contribute "personality" to images, which film-based cameras did not. But lenses, especially the best of breed, have an almost magical fascination.

Every now and then a new lens comes along that offers a unique combination of image quality and productivity that is hard to ignore. The new (September, 2005) Canon 24-105mm f/4L IS is clearly one of these. From the moment I handled a pre-production sample my "gut" told me that this could well be the mid-range zoom that I had been hoping for.

Like Bill, I have been using theCanon 24-70mm f/2.8Lfor almost three years. Optically it’s about as fine a fast mid-range zoom as exists, and I have numerous photographs taken with it on 5 continents that attest to its capabilities. But, because it’s a relatively fast f/2.8 lens it’s also big and heavy, and when mated with a 1Ds MKII it masses just about as much as a medium format system. Not something I care to walk around with all day.

But, because of its focal range and excellent image quality it is a versatile walk-around-all-day lens, and so I find myself cursing it at the same time as I love the images that it’s capable of producing. When used on a 20D, for example, the weight is less, but the combination feels unbalanced.

So when I first learned about the new 24-105mm I was excited. The weight, size and focal range, coupled with Image Stabilization (which I always wished the 24-70mm had) looked like an ideal combination. When I finally had a chance to test one, and then to purchase my own and use it in the field a bit, I knew that this lens was going to be something special.

Further up this page you will see the MTF charts for both the new lens and the 24-70. (If you are unfamiliar with how to read MTF charts, please refer tothis article).

As you’ll see, the charts reflect to some extent the results reported by Bill. The new 24-105mm performs very well, and surprisingly so wide open at f/4, making it a quite usable aperture.

Of course the reduction in maximum aperture from f/2.8 to f/4 is a loss, but not as big as it once would have been. The current generation of Canon digital cameras produce remarkably clean and noise free images right through ISO 400, and so unlike in the days of film there is not much lost when using a slower lens by jacking up the ISO. On the other hand the reduction in size and weight is undeniable. In the 10 days that I’ve owned the lens I’ve been out shooting for several 4-6 hour sessions, and each time have appreciated the reduced bulk and weight over the 24-70mm.

And, as Bill rightly points out, the addition of up to three stops of hand-holdability, along with the extra focal length at the long end (from 70mm to 105mm), is more than adequate compensation for the one stop maximum speed reduction and slightly dimmer viewfinder.

One final point that I’ll add is that in addition to silky smooth focusing and zoom ring action, they have with this lens (finally) improved the AF/MF and IS switches. Till now these have been all to easy to accidentally switch to the wrong position, especially when wearing gloves, because the sliders protruded. Now the sliders for both switches are recessed, and are unlikely to be moved by accident.

Though I have just started to use the new 24-105mm, and unlike Bill have not done any rigorous testing, the frames that I have taken have been very impressive, and the lens’ handling has been exemplary. As this is being written I leave in a week’s time for a major workshop / shoot which I’ll be conducting in China during the second two weeks of October, and the 24-105 has definitely taken its place in my bag, replacing the 24-70 as my general purpose medium focal length zoom.

By: Ray Maxwell An Introduction about the author:As a boy I bought my first 35 mm camera at age ten.  Later, as a hobby, I

FacebookTweet The Man Who Changed Leica Almost anyone who has had their ear to the rail regarding photography, and especially Leica, is certainly familiar with