In mid-March Canon loaned me two cameras for testing. The1D Mark IIand thePowershot Pro1. As I spent two weeks shooting with both cameras, looking at test files and making prints, both the irony and the reality certainly wasn’t lost on me that both of these were 8 Megapixel cameras. Both were being released in the same month, and yet there was a $3,500 price differential between them.

Of course there’s more to the similarities and differences than just megapixels and money. TheMark IIis among the most robust, full-featured and certainly fastest shooting professional digital SLRs to ever be produced. It is a serious professional’s tool and will likely be the first choice of many photojournalists, sports and wildlife photographers for the next few years. It weighs as much as a small dog, is as bulky as a six-pack of beer, and with a telephoto zoom lens attached looks like it could be mistaken for a small shoulder launched missile. The retail price is about U.S. $4,500,withoutthe lens used in this test — which would cost another $1,650 or so.

ThePro1,at under $1,000, is a consumer-oriented digicam that is small enough to fit in a coat pocket, weighs about the same as a couple of newspapers, and could be mistaken for your cousin’s point-and-shoot. Its permanent 28-200mm f/2.4-f/3.5L lens is of course included.

Naturally I couldn’t resist doing a comparison. Of course there’s no way that the Pro1 can compete with the Mark II when it comes to shooting speed, low noise, frame rates, or any one of a myriad of other shooting variables. But, what about something simple? A shot at the lowest ISO that each camera offers, so that each can produce as low noise an image as possible. In the case of the Mark II it was ISO 100, and with the Pro1 it was ISO 50.

Both cameras were tripod mounted and a shot of a subject at infinity on a hazy bright day was taken. Both images were shot in RAW mode, as metered, and histograms were checked to ensure that both exposures were optimum. They were. 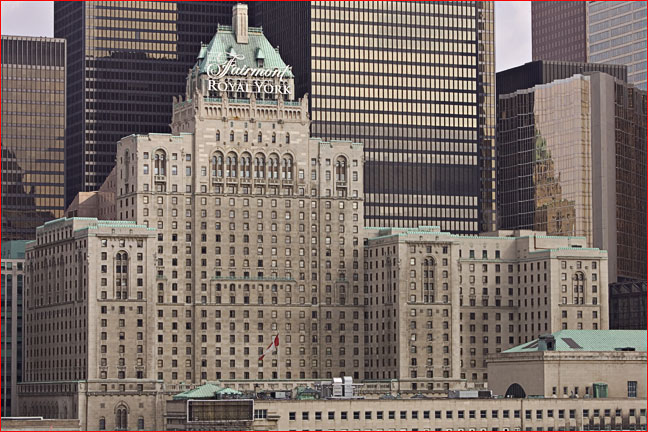 Because both cameras have 8 Megapixel sensors, image and print output sizes were essentially the same — approximately 10 X 15" for the Mark II and 10 X 14" for the Pro 1, with both at 240 PPI output resolution for printing. The lens used on the Mark II was the Canon 70-200mm f/2.8L IS, and both lenses were set to f/5.6.

In Figure #1 above you see the scene. Below in Figures #2 and #3 respectively are 100%pixel peepingcrops of RAW converted files from both cameras. Nothing has been done to either of these files other than gray-point correction. Full size images of these crops would be roughly 34" X 45" at screen resolution. 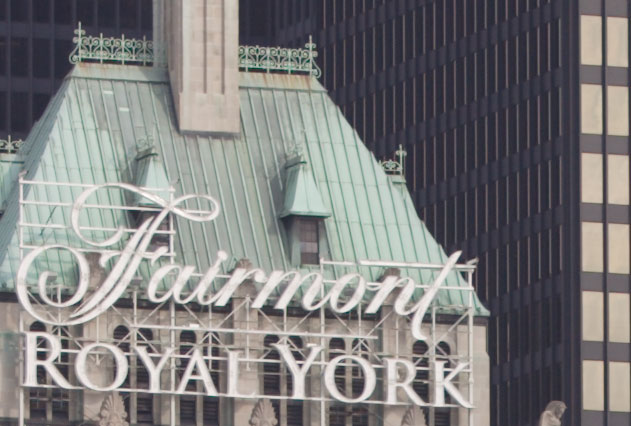 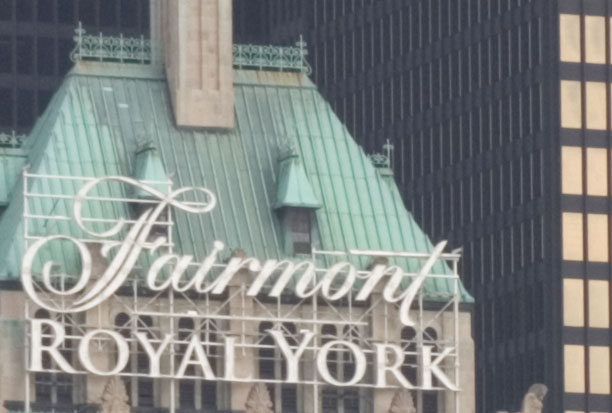 It’s clear (no pun intended) that the Mark II frame shows superior out-of-camera resolution. The difference isn’t huge at normal viewing size, but it is immediately apparent, and really jumps out at 100% on-screen magnification.

But no one uses unprocessed images. How would these two images compare when run through the usual steps of image processing, including sharpening?

Below in Figure #4 you see the processed image that resulted from the Mark II, and below that in Figure #5 that from the processed Pro1 file. Both files had almost identical processing that included local contrast enhancement, colour balancing, brightness and contrast adjustment, and unsharp masking. Both were processed to produce the best print that I was capable of producing from each file, and neither one was referred to while working on the other. 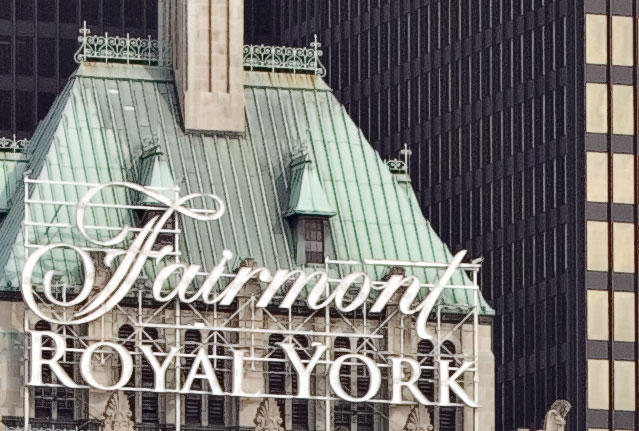 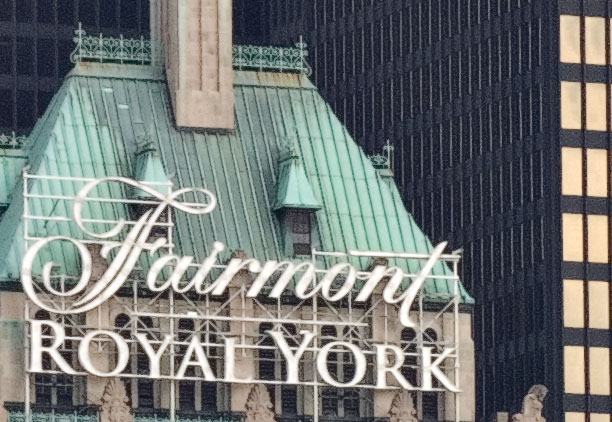 Now the differences have narrowed. Again the Mark II shows superior resolution, but the advantage has shrunk. The difference is noticeable here on 100% enlargements, as is the noise advantage that the Mark II shows. Looks at the dark wall of the building. There is some noise visible on the Pro1 image, and none on the one from the Mark II. No noise reduction was applied at any stage to either file.

But What About Prints?

Here’s where things get interesting. On 10 X 15" prints on A3 paper the difference (meaning the Mark II’s resolution advantage) is still visible, but it is small. Experienced eyes can see it, but the lay person can’t. Show the prints together to a non-photographer and the question asked will be — "What differences am I looking for? The prints look very much the same." Show them to a knowledgeable and fussy photographer and after a few moments of looking back and forth you hear — "Sure, this one (the Mark II) shows a bit better resolution, but wow, I’m surprised at how little the difference is." And as for the slight shadow noise on the Pro1 image, it simply can’t be seen in a print, even at A3 size.

Please note that what are seeing here is not that there’s anything wrong with the Mark II’s image quality. It’s quite excellent — as good as that of the 1Ds, which has become a something of benchmark. It’s just that digicams are catching up, and this can now be seen in a simple low ISO comparison such as shown here.

Of course this test tells us nothing about these camera’s capabilities in a wide range of other areas, not to mention noise at higher ISOs (where the Pro1 would be creamed), shooting speed, robustness, size, weight and so on and so forth. But the issue that is addressed is that here for the first time we have cameras with identical megapixel counts from the same manufacturer. One priced at more than 3.5X that of the other, and that’s without even taking the lens into account.

Anyone can perform this test for themselves, it doesn’t take much time or money as long as one has access to these two cameras. I also want to point out that I could have used any one of the other 8 Megapixel cameras available from Sony, Minolta, Olympus or Nikon, and the results would have been essentially identical. These digicams simply don’t differ that much in terms of image quality, especially under such benign conditions.

The ultimate question then is — for a photographer without sophisticated shooting needs, where basic equipment will do under non-demanding conditions, is a barely visible difference in image quality when evaluated with full-sized prints worth almost $5,000?

Of course I can already hear the hue and cry. Reichmann ispixel peeping! Just the thing he’s been preaching against. Ya, well sort-of. But, it’s in a good cause. The cause is shedding some light on the point that I’ve been making in some recent essays, includingThe Case of the Nit Picking Pixel Peepers,Digital Bridge Cameras and Cognitive Dissonance, and especiallyLet’s Play Another Game.

Where the real differences lie is not in base-level image quality, but rather at the extremes of performance. And of course in terms of features, functions, design, ergonomics and build quality as well.

Naturally there will be those that are convinced that the test is flawed. How, I can’t imagine, since both these specific cameras have been tested withDxO Analyzeras well as with a great many field exposures and are perfect working condition. Also, they are both Canon models, so at least I can’t be accused of a brand bias this time. But I’m sure that there will be those that don’t want the results to be what they are, and so will find something to find fault with. In any event, let the wailing begin.

Where the HECK is Digital B&W?!? I’m a CIT (Curmudgeon-in-Training), so I have lots of pet peeves. One of the worst of them is the

Winterscapes Of The Alaskan Arctic

It was early March, and another cloudless 70 oF day had arrived in Los Angeles. Trees were leafing out, flowers were sprouting across nearby deserts,