The Trip to Southern Utah

After my first visit I wrote an article forPHOTO.NETwhich can be found reprintedhere. I won’t repeat the travel related information here, and much of the technical information is now dated, but if you’re interested in more than just viewing the photographs in this section, and would like to visit these wonderful photographic venues, you’ll probably enjoy readingmy original articleas well.

This new trip was at an unusual time of year‚ mid-winter. One advantage of choosing this time of year was that there are very few tourists. Some days, though we hiked many popular trails, we wouldn’t see another soul for hours at a time.

We had chosen mid-winter, in part because we had hoped for snow. Snow on red-rock creates some wonderful photographic opportunities, but though we had weather, snow wasn’t among the forms of precipitation encountered. During our first 3 days we had mainly overcast conditions with on-and-off rain. While you might think that this would have cramped our shooting opportunities, just the opposite proved true. More on this later.

There is also a separate page ofpanoramic imagesfrom this trip taken with the Hasselblad XPan. 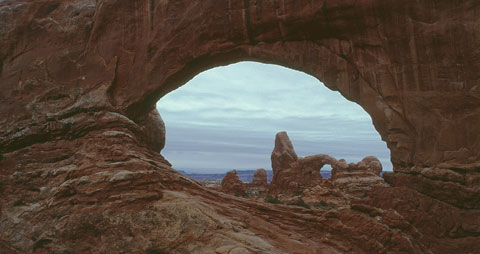 First light on our first day in Arches found us on a high ledge shootingTurret Arch. We’d hoped for some sun but the day dawned overcast. Even so, watching the day begin in this area of isolated splendor was not to be missed.

There were four of us in the shooting party.Steve Kossack ‚ a friend and fellow Southwestern landscape enthusiast, andAlain Briot ‚ an Arizona based fine-art landscape photographer who makes his living from his work. The fourth member of our party wasChris Sanderson, an old friend and film maker who is working with me to create a new multi-media photographic journal. (More on this in the not-to-distant future).

It rained on and off during the first three days and so the weather was highly variable. Consequently we were frequently shooting on theedgesof weather‚ those times when a storm moves in or out of the area. In fact, we often found ourselves chasing the light, especially when shooting in theNeedlessection ofCanyonlands. 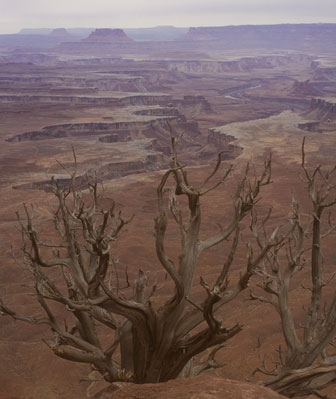 Though this type of image is now somewhat of a clichÃƒ© it is still striking because of the depth perception and perspective of this unique viewpoint. The dead tree is roughly the height of a man, and the canyon floor is about 1,000 feet below the cliff we were standing on.

Photographed with a Rollei 6008i and 90mm Schneider APO-Makro lens on Fuji Provia 100 F. 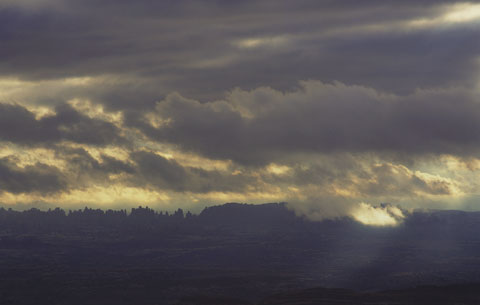 I like this photograph because it captures the drama of winter light and weather in the canyon-lands of southern Utah. But, it lacks a clear focal point. Interestingly, the larger the print that I make of this image, the better it looks. A big print (13 X 18") makes the clouds that much more dramatic.

Photographed with a Rollei 6008i and 300mm Schneider Apo-Tele Xenar lens on Fuji Provia 100 F. 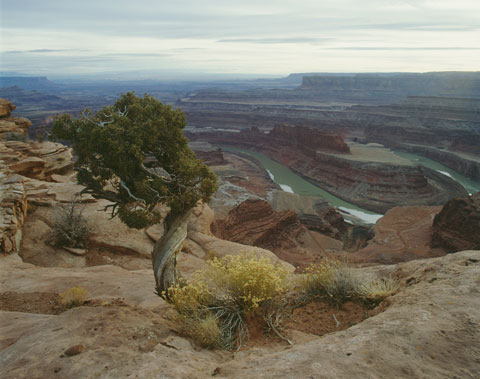 The sweep of theColorado Riveras it runs throughDead Horse State Parkis difficult to capture in a photograph. Rather than to try and do so with a panoramic shot I found this tree whose shape mirrors the gooseneck a thousand feet below. The soft light of a late winter day muted the high contrast normally found in this location, though I did have to crank up the contrast and colour saturation a bit‚ it wastoosoft.

Photographed with a Rollei 6008i and 40mm Schneider Super-Angulon lens on Fuji Provia 100 F. 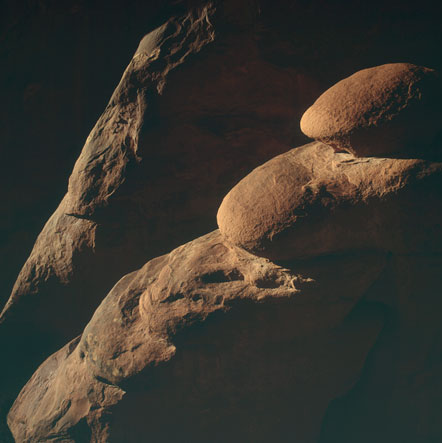 Mid-morning on our fourth and final day found us inArcheshiking to one of the arches (which turned out to be inaccessible due to rock slides). Along the way I found these side-lit rocks, resembling loaves of bread.

Photographed with a Rollei 6008i and 40mm Schneider Super Angulon lens on Fuji Provia 100 F. 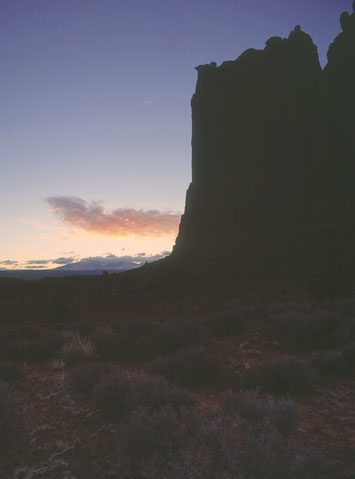 While waiting for sunrise at theCourthouse Washarea ofArcheswe watched what were to be the day’s only clouds form and then dissipate about 20 minutes before the sun rose behind the distantLa Salmountains. A split neutral density filter with a 30 second exposure allowed capturing the faint detail in the foreground. This is best seen on a large print. 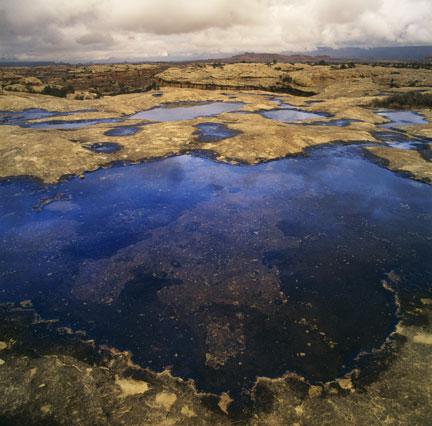 The heavy rains of the previous day had left numerous pools of water in a spot calledPothole Pointin theNeedlesdistrict of the park. (Most of the year this area is bone-dry, so we were fortunate to be there when they were filled with water).

We wandered the area for some time, shooting the pools and reflections, when I remembered myCokin B/Ypolarizer. This is a filter that I rarely use, butSteve Kossack, who introduced me to this unique tool had said, "If you’re shooting water‚ reach for theB/Y". I did, and this was the result.

Though I shoot with the 6X6cm square format I usually crop the image to whatever aspect ratio works best for that image. Interestingly, this photograph works well cropped horizontally across the middle and also vertically. But I was so selective in my framing when I shot it that I can’t bare to alter the proportions.

Squares are inherently restful shapes, but combined with the tension created by the exaggerated colours makes this an arresting image.

Photographed with a Rollei 6008i and 40mm Super Angulon lens on Provia 100F with a Cokin B/Y polarizer.

For acompletely differentimage taken in the same place at the same time byAlain Briot, clickhere.

While my primary camera for this shoot was theRollei 6008I also brought along theHasselblad XPan, and I’m glad that I did. The vistas available in each of these parks really lent themselves to the panoramic format.

I have therefore created a separate page ofpanoramic imagesfrom this trip.

If you enjoyed this Gallery and commentary you might wish to read an article that I wrote onmy previous visitto Southern Utah in 1996. While much of the technical information is dated, the travel commentary is still valid.

Southwest landscape photographersSteve KossackandAlain Briot, who accompanied me to Utah also have image galleries from this trip. You may be interested in viewing their work and comparing all three of our styles and approaches to photographing the landscape.

PowerStitch V1.0 is an extremely powerful program that enables the combining or "stitching" of photographs. These can create either panoramas, such as the one below, or