Light in the canyonlands

Steve Kossackis fascinated by light and colour. This page contains a portfolio of images taken on a shoot inCanyonlands and Arches National Parksin the winter of 2000. A broader gallery of Steve’s work can also be seenhere. 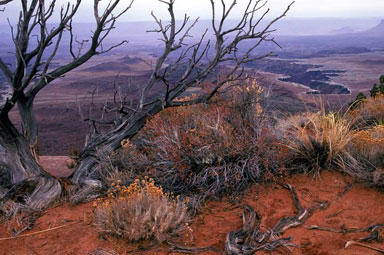 It’s always been color that first attracts me. Next, it’s the light that sets the boundaries of the composition. Lastly it’s foreground. Foreground is the last‚ but I think one of the main ingredients. To give any composition depth it must have detail. The detail is in the foreground.

After some thought I began to see it as Nature’s table being set for the main course‚ the wide expanse of the canyon beyond. The only way of showing the vastness of the scene was to bring the tree into play. But where? As I began this composition I saw a wider "table." Nature has a way of displaying its small eco system of construction and destruction. The aging tree along with the erosion of the canyon seemed to give my image a sense of time. The scene was set. And the buffet served. 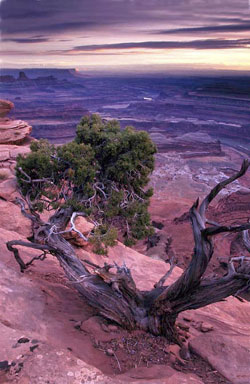 I’ve heard it said that Ansel Adams did not photograph landscape so much as he photographed weather. I think if this was true for him it certainly is true for all of us who see the earth as fine art. Our January, 2000 trip to the Southwest feathered some great weather. Everything from rain and light snow to "Postcard" sunshine. The rapidly changing light brought the opportunity to "chase light" for most of our four days of shooting. We literally were shooting from before sunrise until after sunset. This I found had its upside but also it’s downside. The upside brought overwhelming "seas" of light and shape and the opportunity to shoot a lot of film. The downside became evident at the close of the day as it brought exhausting impatience.

This image fromDead Horse Pointalmost did not happen for me because I was just tired and cold. We saw no sun all day and had photographed until we were sure that none was possible. So, we were packing up the gear and heading for the truck when suddenly the sky in front of me filled with color. At a full charge I headed back to the canyon rim, dropped the tripod, ripped open the pack and got off ONE frame as the light hit the top of the canyon walls. I was LUCKY.

Photographed with a Canon EOS-1n with Canon 28-70 f/2.8 lens and a Tiffen 812 warming filter stacked over a Singh-Ray color intensifier and a two stop soft split ND. 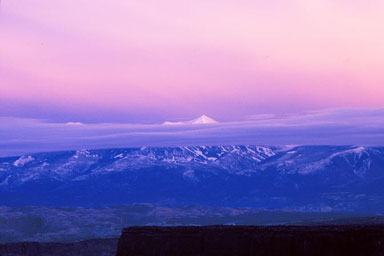 This image seems to rise from the ashes. At sunset the clouds covered the mid-elevations of theLa Sal Mountains. The warm light has a surreal feeling for me. The table or mesa at the bottom feel like steps across the vastness to the foothills. Envision the climb and see if you can make out the mountains lines to the peaks before they emerge from the clouds. I find the more I look the more I see, and the more I see the more I look.

(For a different photographer’s image of the same moment have at lookhere.) 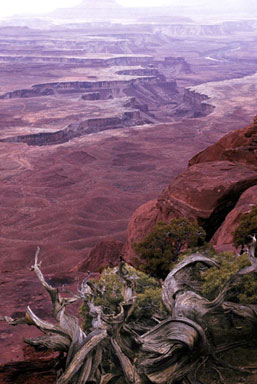 As theGreen Rivermakes it way throughCanyonlands National Parkit can be easily observed from an overlook in theIsland in the Skyregion. A few miles up stream from the confluence with theColorado RivertheGreenmakes a lovely S shape swing. On a day with soft light and faded colors I narrowed my focus to the shape of the river and tried to find a way of bringing the "walk through" of the composition to the flow of the river before it faded into the washed out sky. 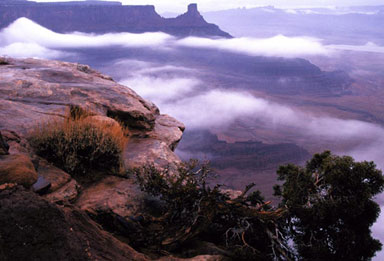 This shot ofDead Horse Canyonin clouds is an excellent example of an expression once imparted to a photo journalism class that I was a part of. It was spoken by a very good teacher. (He must have been, I remember it!)

He said "In order to photograph the Navajo you must first know the Navajo." After chasing light all day by vehicle we were seeking a sunset location that we were fairly certain we would not get. We noticed clouds on the horizon in the East. Our knowledge of the area brought us to the quick realization thatDead Horse Canyonwas exactly where we wanted to be. We knew it was in that general direction and thought the depth of the canyon would be perfect for the clouds to settle into, and hopefully rise out of.

Anticipation is the key to life, and also photography. Knowing the "Navajo" or in this case knowing how to navigate the geography of the native lands gave us a "gallery" of exciting images.

(For a different photographer’s image of the same location have at lookhere.) 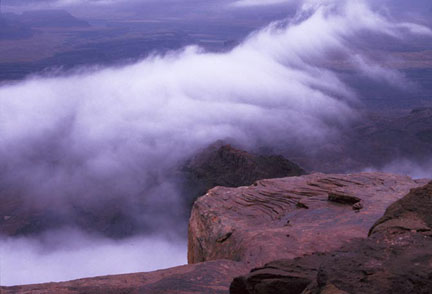 I was using Canon’s 100~400mm IS lens for the first time on this trip. What a treat. And now a chance to use it‚ but how? This scene before me was like shooting action.Waves of cloudswere rolling acrossDead Horse Canyon. Do I use the "stabilizer" and pan with the clouds? That would blur the background and at a slow shutter speed (made possible by the IS) it might look something like a race car shot.

Maybe zoom at the same time and watch the edges streak like flames? No! The clouds weren’t movingthatquickly. The slight blur of the slow shutter speed would give me motionandby stopping down, depth of field. This I thought would show the expanse of the scene and would add color to the foreground that was lacking in the overall image and give the "Wave" a flow. So, off went the Image Stabilizer and on the tripod went the lens.

Photographed with a Canon EOS-1N Canon and 100~400mm IS lens, with Singh-Ray Color Intensifier, on Fuji Velvia 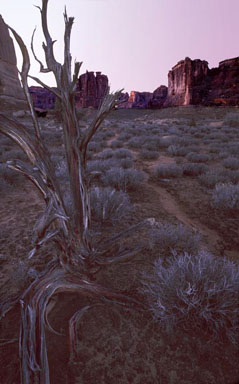 There is a magical time of day for me. It’s not one of thenormal times whenwe like to photograph‚ that is the time just after a sunrise or before a sunset. It’s the timebeforea sunrise. Long before! It’s the time spent thinking about the possibilities of what may follow. The time spent climbing out a sleeping bag or a hotel shower. The time spent traveling to a pre-planned destination. The time spent hiking and setting up. And then most of all, it’s the time spent just standing or sitting quietly in the dark and cold. Thinking about where you thought the sun would rise and questioning that certainty. Looking in all directions for other possibilities while knowing that you’re already there. Mistakenly thinking that the light is changing even when you know it’s not ….YET!

At this time of day when the world is quiet, dark and still, if I try hard, I almost can feel it spinning. It’s my favorite time of day and the photography starts with the first light that will give me a 30 second exposure at f/8.

Photographed with a Canon EOS-1n and Canon 20 mm f/2.8 lens with a Tiffen 812 warming filter on Fuji Velvia

You may also be interested in viewing a portfolio of photographs ofCanyonlands and Archesshot at the same time byMichael Reichmannand there is alsoa portfoliobyAlain Briot.