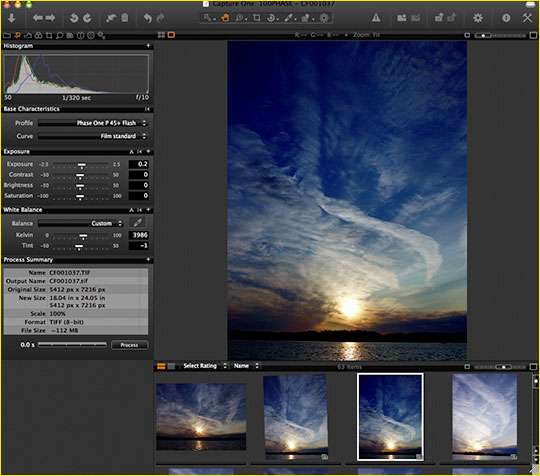 After a gestation period greater than that of an elephant, Phase One has released a public beta of its Capture One software,Version 4.0. Before taking a brief look at what 4.0 has to offer, a slight historical digression is in order.

Phase One has been writing raw software about as long as anyone. Their medium format backs are at the top of the totem pole when it comes to image quality, with a claimed 50%+ market share on a world-wide basis. To support their backs Phase developed Capture One software, a raw processing program which for years was among the most highly regarded programs on the market. And unlike some MF back makers who kept their high-end raw processors proprietary, Phase released Capture One with support for a wide range of 35mm DSLRs, including virtually all of the models in use by pros and advanced amateurs. This was a very clever move because it meant that photographers with Phase backs didn’t have to learn and use two separate raw processing programs. It also provided DSLR users with the then very highly regarded workflow and image processing capabilities of Capture One.

But all was not right in the state of Denmark, if you’ll pardon the literary allusion. For almost three years Phase One allowed Capture One 3.x to progress slowly, but basically unchanged. It was announced that a new version, 4.0, was under development, but until now nothing has been publicly seen. Phase One indicated that this was going to be a major upgrade, but it has been a very long time in coming.

In the meantime the rest of the industry was not dozing at the wheel. Apple introduced Aperture, completely changing photographer’s expectations of what a raw processor was both capable of and should provide in the way of features, and then shortly afterward Adobe released Lightroom for both Mac and Windows platforms. This too raised the raw processing bar to a level never seen before.

While I’m not privy to inside information it’s not hard to assume that Phase One was somewhat blindsided by these developments. This likely explains why 4.0 of Capture One has been so delayed. But now it’s here, sort of, so let’s see what it has to offer.

What You See is What You Get

As can be seen in the screen shot above, C1- V4.0 offers a fairly standard presentation. The default configuration is with a series of control tabs on the left of screen, a large(ish) center image window, and a lower scrolling thumbnail window.

Anyone who is familiar with C-1 V3.x will be pleased to see that the top Tool Bar is still completely user configurable. Windows users should also note that the user interface is now the same between Macs and PCs. In V3.x this was not the case and Windows users ended up with the short end of the stick.

The first thing that you’ll note is a refreshed palette, with the now almost standard gray user interface, designed to give you a neutral colour background within which to evaluate your images colours.

Here are some of the features in 4.0 that Phase One is excited about…

Phase One’s familiar Histogram, Levels and Curves tools are available, and though they are a paragon of simplicity and flexibility they do look a bit dated compared to the new tools in Lightroom. There’s nothing, for example, with the power of Lightroom’s Targeted Adjustment Tool, or the Clarity tool (local midtone contrast adjustment), or Vibrance. But otherwise the image processing tools in 4.0 are comprehensive and straightforward.

As noted by Phase One 4.0 has both Highlight and Shadow recovery tools. The Highlight tool appeared to work very well, but I found that the Shadow tool extends too far into the mid-tones.

Variants is very welcome, as it allows you to try different image processing approaches with no significant disk overhead, and web page contacts sheets is now almost a must in any raw processor.

Something positive that needs to be kept in mind is that Capture One uses profiles. If you are a believer in camera profiling then this is a huge differentiator, and not to be underestimated. There are profiles made by Phase One included for all of the cameras supported (in some cases several versions with differing characteristics). You can also produce your own profiles with appropriate tools, or have the made by third party services.

One other area where Phase One deserves praise is that with 4.0 they support the DNG format on both file import and export. This is a real plus, because this means that any raw file from any camera can make a round trip between Capture One and any other DNG compatible raw processor (Camera Raw or Lightroom, for example) and still remain in raw format. (Some testing with an early beta shows this to be still buggy, but when it’s sorted out it will be very welcome).

This provides access to the most commonly used image processing tools.
The other tabs across the top include Organize, Exposure, Color, Composition, Metadata
Output and more… Each ToolTab provides a comprehensive set of controls for its function
while the QuickToolTab groups their main functions all together for ease of use.

Sessions are no longer part of C1. These were valued by some and cursed by others. (I was among the cursers). Now the program simply accesses your files in their copied locations and creates a subdirectory of its own for settings and previews.

Speed is claimed to be much greater than V3.x and indeed this is one area where 4.0 seems to excel. This is a particular advantage over Lightroom, which still is far too slow for most people, especially with 16MP and larger files.

The following cameras are currently supported by V 4.0

Phase One claims that they will be providing support for new camera formats on a regular basis. Hopefully by the time the beta program is finished in early November the just-released cameras from Nikon and Canon will have support added.

Capture One 4.0is now available as a free beta version download. It is available for both Macs and PCs. After November 1, 2007, if you want to continue to use the program it will cost you US $99 / Eur 99. If you are the current owner of of Capture One LE then you will be entitled to a free upgrade to V4.0. Anyone currently owning a Pro version of Capture One will also be entitled to a complimentary copy of 4.0.

Since V 4.0 is a free beta at the moment you should definitely download a copy and give it a try. Phase One has afeedback forumwhere you can post your comments and suggestions, though you should be aware that there is no formal program support being offered during the beta period.

Which brings us to V 4.0 Pro. No release date has been given, but I am lead to believe that it will not be available until the first quarter of 2008 at the earliest.

And what additional features will V 4.0 Pro have over the current 4.0 product? Here are a few things that Phase One currently has up their sleeves…

And thus we get to Phase One’s quandary. Capture One 4.0 is a competent raw processing program offering a decent range of features and very high image quality, as one might expect from Phase One. But, it is late to the party. As mentioned at the beginning of this report, over the past two years Apple and Adobe have raised the bar (or changed the party from beer and pretzels to champaign and caviar, if you prefer that metaphor). This means that not only is C1 4.0 late, but it also isn’t well enough dressed.

The only salvation for 4.0 at the moment is its price. At $99 it is competing against $250 products and so a less full featured offering is to be understood. On the other hand they are also competing against free raw programs from the camera makers, and some of these have now become quite decent. There are as well similarly priced offerings, such asBibbleand some potentially exciting new offerings such as Etcetera.

Raw processing "maven" Michael Tapes, has given me the OK to mention that he has come together with Magne Nilsen as a partner in Etcetera Consulting. Magne is known for his highly praised color cameras profiles built for use with Capture One 3.x, and Color Engine for use with RawShooter. Many consider Magne as one of the world’s premier color scientist with regard to profiling modern day digital cameras. Michael and Magne are working on a raw converter product, that apparently is not designed to compete directly with Adobe Camera Raw or Lightroom. Michael said " Our aim is simply to offer an additional product that can fill in the workflow and/or image quality gaps that exist when using any one product as a main raw workflow."There isno word at this time on the price or available of Etcetera.

Where the Pro version of Capture One 4.0 fits into this rapidly evolving constellation of products remains to be seen. Competition is now tough, and by the time Pro comes out it’s quite likely that Aperture and Lightroom will have moved on to offer even more compelling features and capabilities. Price will also be an issue for C1 Pro. With the new sweet spot of $250 for high end raw processing software, can C1 still command a $500 price tag?

In the meantime thoughCapture One 4.0 is available as a free public beta. Download a copy and see whatyouthink.

FacebookTweet One of the most important tools for photographers, especially those who like to print, is an accurate monitor. We use monitors somewhat differently from