With the exception of "Pride-of-Ownership Day" when I bought my first Wista view camera in 1984 or my first Leica M6 in 1991, I simply cannot recall a time when I have been as pleased with a new camera as I am right now.

I bought my used Konica-Minolta 7D from Miami, Florida, wedding and portrait photographerPeter Gregg. Peter gave me a very honest and obviously knowledgeable appraisal of the camera’s strengths and weaknesses – including information about flash capabilities that had escaped every online reviewer. (I have invited Peter to write a "Konica-Minolta 7D Flash Tutorial" for posting on myBearpaw Photography Publicationsweb site). Peter’s appraisal strengthened the impression I’d gotten from online reviews that the KM 7D’s capabilities met my needs and that its weaknesses wouldn’t bother me.

My reactions have not been a case of pride of ownership. Well, not exactly. While I like the camera well enough as an object, I have had other DSLRs and AF "Wunderplastik" in and out of the house over the years, and the 7D as an object of camera fetishism is no match for a gleaming Leica, a time-burnished Deardorff, or a mint Nikon F2. 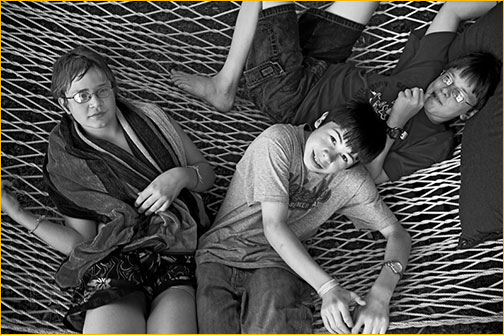 Rather, what accounts for my admiration are three things: results, results, and (yup, you’re on to me) results. As I mentioned last week, the 7D started paying photographic dividends on the very first day I used it. I’ve continued on a strong pace with it ever since.

I attribute this to three things: first and foremost, the delightful Anti-Shake (AS) feature. As everyone no doubt knows, the 7D’s unique technological "hook" is that it has AS built into the body, so that every lens becomes an AS lens. (So that we’re clear about what we’re talking about here, Canon, which developed the basic underlying technology first, calls it "Image Stabilization" or IS, and Nikon calls it "Vibration Reduction" or VR.) Canon and Nikon offer expensive telephotos with this feature in the lenses, which doubtless makes great sense for sports and critter photographers. But the other great usage of AS is for low-light work, where it has immediately and emphatically proved itself to me. Canon offers one or two normal lenses that offer IS, including its excellent 18-85mm. However, the widest aperture of that lens is ƒ/4; I can put an ƒ1.4 lens on the 7D andstillget three stops’ worth of advantage over the Canon offering for low light.

Since a picture is worth a thousand words, here are 2,000 words about the KM 7D’s AS feature. I meet my friendNickevery couple of months for oriental food, to share our pictures, and to talk photography. This is a quick’n’dirty rendition of a snapshot of Nick in the dullish light of a restaurant interior. The point? I was deliberately and rather vigorously bobbing the camera up and down as I took it. Which, as you can see from Nick’s expression, he thought was rather comical. 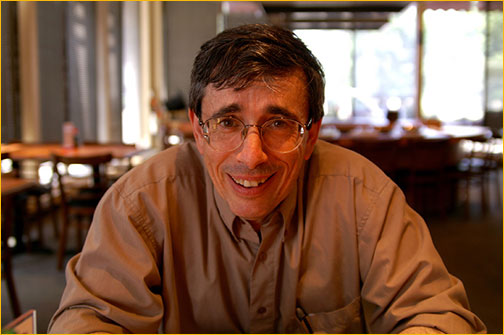 As you can see from the detail, the AS compensated for the deliberate camera movement very effectively. (This picture was only corrected for brightness and contrast, nothing else.) 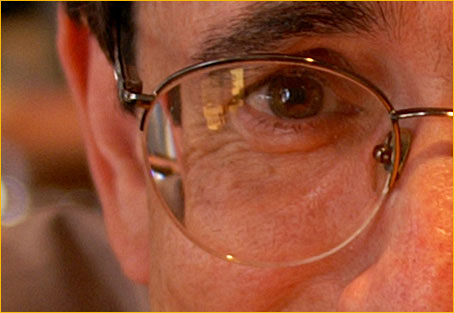 Except in bright sunlight, I keep the AS feature switched on for nearly every shot. It’s much less of a battery drain than it is when the feature is in lenses, because it’s applied past the viewfinder – it turns on just before the picture is taken and turns off just afterward. I’d like to think that I can hold a camera steady enough to take a picture like the following one without AS, despite the awkward angle and the deep shade, but there’s no question that AS lends a greatly increased level of confidence in situations like this. 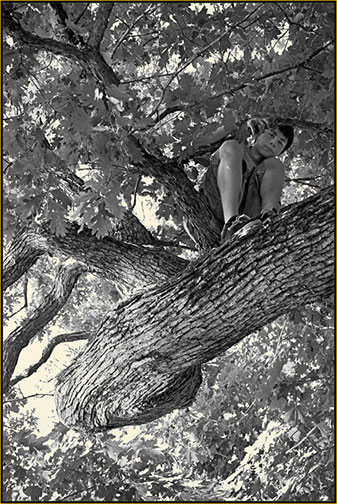 Zander as monkey (you can ignore the background color.
I was experimenting to see if I could duplicate in Photoshop the effect of a neutral emulsion
on an off-white paper base, not unlike Agfa Multicontrast Classic in its early incarnations.)

The next great advantage of the 7D is that it inherits from the Minolta Maxxum 7 a great, clear viewfinder (the best on a mid-level DSLR) and very well-thought-out control features.

You might want to take this with a grain of salt. At 48 years of youth, I’m getting to be an older dog, if not quite an old one, and I’m simply more comfortable and more confident with analog controls. They seem more natural and direct, and by being less hidden they’re a bit more reassuring. It’s possible, I know, that others don’t feel the same way. So be it. All I can do is be honest about my own impressions, and let you weigh my comments against things other people have said and your own impressions in order to come to your own conclusion.

At any rate, having had the KM 7D for a couple of weeks and darned near killed off what was left of my hard drive, I’m embarrassed to say that I’ve only resorted to the manual once…and in that case, figured out the answer to my question myself anyway. There are a lot of things I still have to learn about the 7D, no doubt. But if you’re a photo-dog of reasonably long standing, it’s pretty easy and straightforward to get up and running with this box. Pretty much everything you need is at your fingertips. 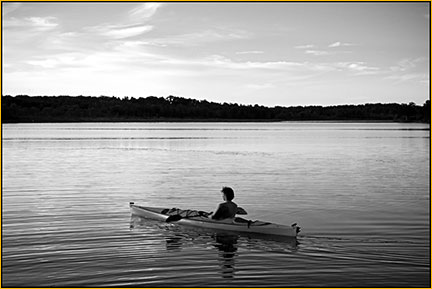 I’ve also been impressed by the deep, rich, meaty colors of the Olympus E-1’s sensor. What finally removed that as a major shopping consideration for me is that…well, I like black & white better. Not "best" and not "only," but better. So I figured that while a color photographer might be more swayed by the E-1, it wasn’t a primary consideration for me.

In light of this, I was wholly unprepared for the KM 7D’ssuperbcolor rendition. Set on "Natural" sRGB, the colors are beautifully accurate. Flesh tones are outstanding, reds are well controlled and detailed, and all colors are in balance, with nothing over- or under-emphasized. And the camera renders complex hues really well, maintaining color delicacy and accuracy into the deep shadows and bright highlights. This is a real strength of this camera. 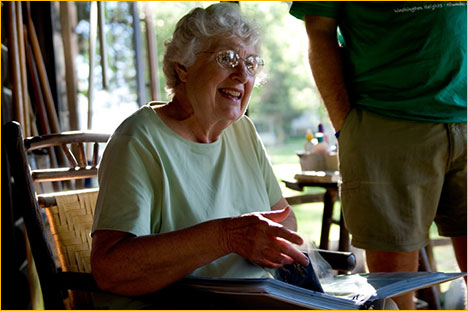 Note the excellent accuracy of the flesh tones into deep shadow.

I should mention that I’m talking in all cases about shooting in RAW. I haven’t had occasion to work with jpeg-only output, and I doubt I will do so even for testing purposes.

Despite the many felicities of the camera as a whole – however numerous they are – nothing trumps the capabilities of the AS system in my book. The picture below (just one more example out of many) was shot in the near-darkness of late dusk, at ISO 1600, with the AS feature (of course) activated. It’s quite true that people who don’t shoot so often in low light may be perfectly well served by a good DSLR that offers high-quality ISO 800 or 1600 performance, and for shooters who are not as dedicated to available light as I am, flash may be as important as, or more important than, AS. For me, however, the AS-in-the-body feature of the KM 7D is both a revelation and a liberation. In just the first week of working with it, it’s made possible more than two dozen fine "catches" for me that I simply don’t think I would have gotten without it, and it’s given me an extra measure of confidence and capability on literally a hundred other pictures. 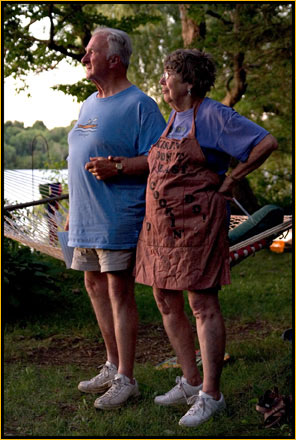 What pleases and amazes me most about the 7D is when I think back in my mind to the thousands upon thousands of pictures I’ve taken in my life using too wide an aperture, or too fast a film, or struggling with camera-holding techniques, making attempt after attempt to steal a clean shot in low light. And also, of course, thinking of all the shots that got away because of camera movement. The more such examples you can recall in your own experience, the more you will love the Konica-Minolta 7D. Personally, it has convinced me that spending any less for a DSLR would have been a golden opportunity tragically missed.

By Richard SextonGet the most of the best to the greatest number of people for the least.-- Design credo of architect and furniture designerCharles Eames