The "Compact Disc Effect" and the Konica-Minolta Maxxum 7D

This morning I’ve posted my latest book for purchase. It’s calledLenses and the Light-Tight Box. It’s not as good a book asThe Empirical Photographer, but it can be considered almost complementary to it:Empiricalcontains critical articles and show reviews – the picture stuff – andLight-Tightcontains articles about cameras, optics, and techniques. Equipment stuff.

Accordingly, I’ve priced the new book a lot lower. In fact, for a few days at least, it’s priced lower than its planned selling price. Although I don’t much care for the jargon of salesmanship, call it a "special introductory price." For now, it’s $12.99. It will go up to $17.99 sooner or later, maybe by the end of the week, maybe by the end of June.Lenses and the Light-Tight Boxis workbook-sized, double-columned, and has a fairly decent number of illustrations. I didn’t actually count, but I’d guess between 30 and 40. There are 21 articles. I’m not handling fulfillment, either. You deal entirely with the site that does the POD. (I’ve learned my lesson. And don’t worry, I am working on fulfilling thoseEmpirical)

Why the low price? Just because I’m kind of wondering whether people will want it. It’s a collection of previously published articles, mostly from magaznes, mostly from 1987 to 2002. For people who are purely digital photographers, the new book will be almost, well, historical – although of course I hope, amidst 60,000 words penned by me, readers can find at least a few nuggets of (photographic) wisdom, and/or a laugh or three. There are a few articles which actuallyarehistorical, of course. "The EOS Revolution," for example, tells the story of Canon’s momentous and fateful decision to switch lensmounts, a perilous move that, as we know now, eventually enabled Canon to challenge Nikon for the #1 spot. It was written based on a lot of research and was actually reprinted and distributed by Canon itself for a few years in the early ’90s. Might be worth having.

Oh, and I’ve also added 17 more lenses to the free "Lens Bokeh Ratings" download at the book site, too, bringing the total number of lenses rated to 52. It’s version 2.

Recently I’ve been salivating over, and pining for, a Konica-Minolta Maxxum 7D. If you think about it, it’s just the kind of camera that would appeal to me. Despite bristling with knobs and buttons, it’s actually pretty straightforward, because it attempts to put as many controls as possible behind single unambiguous analog interfaces. And it’s ergonomic and quick and has a very large, very clear, almost 35mm-like viewfinder – and if you’ve been reading these columns for a while, you know how I can go on and on about that. Plus, it has one very big advantage: Anti-Shake for any focal-length lens.

I like lenses that see like I do. All my life I’ve used lenses between 28mm and 100mm on my 35mm cameras, with 90% falling between 35mm and 90mm. Now, I’m certainly aware of, and appreciative of, the fact that wildlife, sports, and fashion photographers use lenses longer that that – sometimes a lot longer – and that Anti-Shake (or Image Stabilization [Canon] or Vibration Reduction [Nikon]) really comes into its own with long lenses. But it’s also very useful for low-light work. And I do a lot of that. Even though Canon has very thoughtfully made one zoom lens (the 17-85mm EF-S) that dips into the range of true wide-angle on the APS-C sensor, most of the lenses I’d use are just never going to be graced with Anti-Shake. Except by the 7D, which blesses thusly every lens you stick on it. Mighty, mighty tempting, is all I can say.

The 7D body is going for as low as $1,050 in the U.S. right now, thanks to a rebate, and I have no doubt that it’s well worth that price. Konica-Minolta surely has dumped a pile of yen into R&D, and the camera is built like a Lexus. However, my skinflinty resistance to paying that freight, coupled with a recent comment I read, calling the new Nikon D50 an "ultra-budget" camera, made me stop and think. "Ultra-budget"? Hmm. At $900 to start and a projected $750 street price?

What I’m wondering is whether something might happen with cameras that’s similar to what happened with recordings in the 1980s. If you’re old enough to remember, you’ll recall that vinyl records, which were fairly fussy to make and very fussy to make well, cost between $3 and $8 in the 1960s and ’70s. Even the priciest Deutsche Grammophon classical platters, with those big, unionized orchestras to pay, rarely broke the $10 mark in retail stores. Then came the Phillips/Sony Redbook-standard Compact Disc. An exciting technology when it was new, the CD did away with a number of headaches. You didn’t have to return every third one to the store. They had no surface noise, and even more importantly, theyacquiredno surface noise: playing them repeatedly never made them wear out. To average consumers who had lived for years with defective purchases and pops and clicks and ticks and favorite records that might literally have required replacing, they were a revelation.

In the very beginning, CDs were extremely expensive. Only two factories – one of Phillips’ and one of Sony’s – could make them, and in the beginning it was a delicate manufacturing process. We saw photographs of gowned, capped, and masked technicians in clean rooms. Early prices were on the order of $30 per disc. 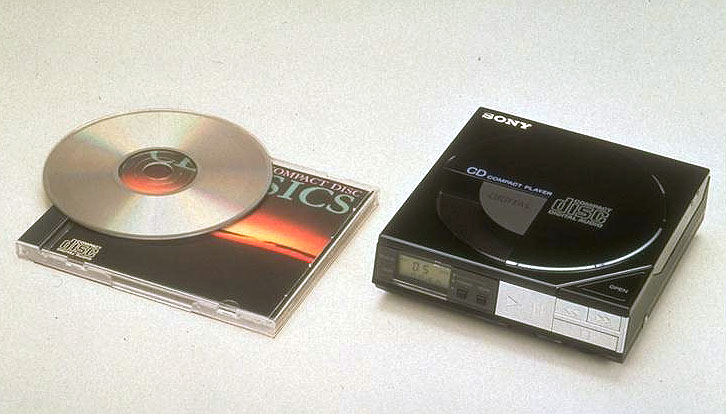 The first CD player I ever bought, Kozo Ohsone and Akio Morita’s portable D-50 was responsible for jump-starting the CD revolution.
Introduced in November 1984, it was the first player below $300. I know because I had resolved to wait until the price dropped below
$300 before buying one, and I paid $299. That turned out to be roughly half of Sony’s cost basis –
Sony took a loss on it for the first 18 months in hopes of later profits. Which eventually followed, in spades.

Before long, though, there weresixfactories that could make CDs, and the prices plunged, first to $25, then to around $20 per disc. They were enormously popular – in fact, still one of the most popular product introductions in the history of electronics. So venture capital dove in. More factories were built. The prices of recordings fell as the costs of production fell. And pretty soon there werefortyfactories worldwide making CDs, and the cost per disc plummeted to less than a dollar – eventually, much less.

But a funny thing happened to the prices of recordings. Theystoppedfalling, well before they might have. A label called Naxos eventually made a big success of itself selling CDs for $5-7, but for the most part, the prices of CDs stayed for two decades or more at $14-16, dipping to $10-12 for budget and discounted discs. It was a very long-sustaining cash cow for the recording industry and everybody surrounding it. (Artists too? Hey, it paid for Neverland. And did you know Rod Stewart is a train buff and has a real, full-sized, functioning steam locomotive? True.)

What had happened was this. First, the radical new technology had created lots of interest and publicity. Then the early, very high prices had inured customers to a quantum leap upwards in prices. The subsequentfallin prices coupled with the inherent desirability of the product created a robust perception of value…even when it became far in excess of actual production costs. Those two conditions – resistance to high prices, and perceptions of low value – are the hardest things in marketing to overcome. When you’ve done both, it can be a gold mine. It was.

I’m sure nothing like "The CD Effect" has happened yet in the digital camera market. Now, today, the D50 and the Maxxum 7D are assuredly worth what they cost, given manufacturing realities, R&D costs, and competition. But consider that the film equivalent of the $900 Canon Digital Rebel XT costs $200, and the film equivalent of the $5k Nikon D2X costs $2k, yet both digitals are seen as providing great value.

What will happen? How will it "shake out"? We’ll have to wait and see.

This page list articles on this site in the form ofLocationreportsand portfolios. You can find the latest additions on the site'sHome Pageas well as listed