I became aware recently of the work of a photographer named Wade Heninger. Wade, whom I don’t know personally at all, photographs in black-and-white with a Konica Hexar RF and a Leica 50mm Summicron. It’s all he owns. His pictures are simple, low-key, elegant, undemonstrative, and quite fine. 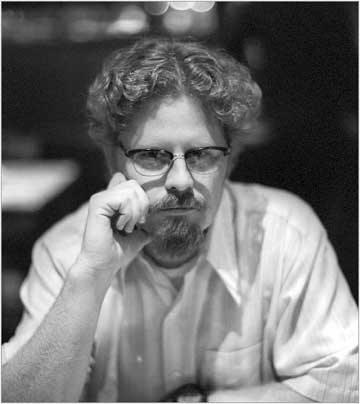 Nothing at all unusual or alarming about that, right? Yet, when I read it, it made by blood run cold. No, it’s not that I have a thing for 50mm lenses. It’s that the guy has an interesting, unusual vision. To me, it seems all of a part with black-and-white and with the odd neither-here-nor-there angle of view of the 50mm. His methods are simple and direct. And to my reading of the situation, at least, he’s unusual in that, unlike most photographers, he makes this directness and simplicity work.

I have a confession to make: I love cameras and lenses. I¹m fascinated, in fact, by every aspect of the craft of photography. I like the smell of Ilford fiber-based paper when I crack open a new box. I get pleasure from stainless steel graduates and developing tanks, I like mixing developers.

I knew from the start that this "gearhead" or "gadgethead" syndrome was latent in me. So when I was still in school I had in mind defining for myself a purist approach to my photography, and I began to search for a manner of working which would suit my temperament and my beliefs.

I decided that if I could settle on one set of technical parameters, one size of enlargement, one style of presentation, then — like Eugene Atget or Edward Weston, my earliest role-models — I could divert attention away from the "creativity" inherent in choices of technique and style and concentrate attention entirely on the pictures — that is, entirely on what I make the camera make the world look like. This was part of my strategy for discovering how to apply the medium of photography to the concerns of the artistic consciousness. Organic changes of style and shifts of conceptual focus — of taste, subject matter, printing style, formal and pictorial interests, and my awareness of the world around me — would then be gradually subsumed into the larger flow of my life’s work. What I hoped this would do is make every single picture explicable within the context of the whole, and entirely consistent with the whole. Then, I thought, all the time, thoughtfulness, and labor I expend on my work would eventually become sensical and worthwhile.

This strategy was suggested by a professor under whom I did my first assistant teaching, John McIntosh, and had to do with rejecting the notion that a "body of work" could consist of thirty or forty pictures tied together by one idea, identified as a "project" by a common style and technique, subject matter and treatment, but was instead a term that should be reserved for a life’s work, like theouvresof many of the great figures in photography’s past.

My introduction to Weston came (I think) very early in my education, years before I decided to become a photographer. At a gallery at Dartmouth, in Hanover, New Hampshire, I overheard a man saying that there was once a photographer who in his whole life made nothing but contact prints of 8×10-inch negatives. The almost ascetic simplicity and directness of this approach seemed almost priestly, or monkish, and spoke to me of an unabashedly passionate commitment to thevisual contentof the pictures, and a renouncement of any preoccupation with special effects or with the variety of of the processes by which photographs can be made. My inadvertent informant did not even know the name of the man he was talking about, and years were to pass before I was able to identify Weston as the photographer I had gotten wind of that day in the Hopkins Center. But in a world where flashiness, newness, and pseudo-originality seem to count for almost everything, that report of Weston’s almost perverse refinement of method, his paring away of everything save the essence, made a strong and lasting impression on my thinking.

I did, however, interpret Weston’s influence in a different manner than is customary. It seems to me that when modern photographers set themselves up like the masters of the past, they slavishly imitate the particulars, and miss the spirit. Some use Amidol or pyro developers like Weston did, some set themselves up with 8×10 view cameras and restrict themselves to contact printing. But what seems most salient to me is that Weston, like Atget, Sander, Cartier-Bresson and many other photographers, used simple, economical, readily available tools which were undistinguished for their time. The point was always the picture, the image, the subject and how it was seen.

When I was a student, the simplest, most economical, most readily available tool — and hence the one most similar in spirit, if not in actuality, to what Weston and Atget used — was the ubiquitous 35mm camera, equipped with a "normal" lens. So when I did my student work it was important to me to avoid techniques that were in any way special, fancy, precious, or unusual, although within those parameters I constantly worked to improve and refine the quality of my craftsmanship. It was two years before I replaced my single 50mm lens with a set consisting of a 35mm and an 85mm, for instance, and for almost seven years I used nothing but one film/developer combination, Plus-X and D-76.

When I began writing for magazines, I had also begun experimenting with making larger prints. So, naturally perhaps, I began to long for bigger negatives to work with in the darkroom, and my search for a medium-format camera began.

At first, of course, it’s a great deal of fun to be able to get your hands on any camera you please. It’s a case of the proverbial kid in the candy shop. But what I’ve found is that the gear is a separate hobby. It’s related to, but not central to, the task of making pictures out in the world, and to a concentration on the work of being a photographer.

Well, over my years of reviewing cameras I¹ve learned a great deal about what’s available on the market; I’ve learned a fair amount about the industry; I’ve learned to appreciate camera technology for its own sake, and to anticipate new products with enthusiasm. I’ve tried dozens of cameras — some of which I never had any intention of using for serious work — and I know as much about guessing how to operate them as a good camera salesman. I’ve tried all sorts of different films and processes and chemicals and papers.

I’ve also gotten so badly sidetracked in the "hobby of the gear" that for a while there I think I was in danger of not being a photographer any more.

Using different cameras, films, developers and papers all the time — and, moreover, replacing as one’s basic motivation the desire to make pictures with the intention to try out the equipment and materials to see how they do — has an insidiously deleterious effect on the consistency and direction of one’s work. Worse, there¹s a psychological aspect to all this that functions as a sort of trap. Because the more cameras I tried, the more I wanted to try; the more I learned about what was available, the less I was able to be satisfied with any one camera as a tool. I began to switch from camera to camera, film to film, all the time with an increasing sense of frustration and anxiety. Eventually, no camera had the right features; no lens was sharp enough, no film both sharp and grainless enough.

It took several years before I truly realized what I was doing, and what was happening to me. By that time I began to feel the urgency of re-committing to my own work, and I realized that purposefully turning away from "camera enthusiasm" and the tester¹s mentality was going to have to be part of it. I made several attempts to forcibly wean myself from my habit of buying new cameras one after another: each time I’d say to myself, okay, this is it — this is what I’m going to use for the rest of my life.

To my consternation, I wasn¹t able to do it! I bought the latest and the best equipment, I bought the most expensive equipment. It didn’t help.

I still switch around from camera to camera, jumping from one enthsiasm to another. I enjoy shopping. I get a sort of low-level thrill from a new camera. While I’m still a photographer, I’m also a gear hobbyist. The two things shouldn’t really be confused — you can be one without being the other.

It’s too late for me. I’m not going to change now. Having started with the best intentions and the highest of motives, I’ve devolved into somebody who is 60% gearhead and 40% photographer. Dante wrote "Lasciate ogni speranza voi ch’entrate!" "…All hope abandon, ye who enter here." Many of us think that testing gear is a temporary thing that we do in preparation for working. In fact, I think it is just as often — perhaps more than often — apermanentdetour. We get off track and never get back on.

Maybe there’s nothing so wrong with Wade Heninger buying that 28mm lens. But after 20 years of day-to-day contact with photography buffs, I know how that goes. Next thing you know he’ll decide he also needs a 90mm, and then he’ll notice that he doesn’t use the 50mm very much any more, and then he’ll decide he should really try an M7, and then, hmm, there are some things that would look better in color, and sometimes you need an SLR, and, oh, no, not this SLR, a different one that has such-and-such features, and what would this look like in 6×7, and then there’s digital….

A Weekly Column By Mike Johnston Thoughts on Digicams, Part II: The Sony DSC-F707Part 1 can be Found HereÃ‚© Mike Johnston 2002 I buy a fair