Digital Sizzles in the Desert

Digital Sizzles in the Desert

I have to admit I’m utterly dazzled by the torrent of news coming out of Las Vegas. Is digital exploding, or what?

If I remember correctly, it was 1998 when my doctor-brother showed up at a Chinese restaurant with a new plaything — a digital camera. I probably smiled with patronizing tolerance. The little thing had about two hundred pixels (2 centipixels?) and it took two minutes between the time you pushed the shutter button and image capture. A lot can happen in two minutes — John Kerry can eclipse Howard Dean, for instance.

I’m exaggerating again, of course…but not significantly. The fact is, in 1998 most photographers couldn’t use digital. The good cameras cost an amount that my little boy generically refers to as "a billion dollars," and the consumer cameras were toys — technologically impressive for their time, granted, and impressively expensive, but, photographically, barely more useful than the little plastic cameras that you could get by sending in $1.95 and five Bazooka Joe comics.

This past Christmas, the hot seller in the camera world was Canon’s digital Rebel. Consumers couldn’t get enough of ’em. (Neither could retailers.) Everybody wanted one. It was even advertised on TV, if you watched enough TV and didn’t blink. All that was missing was a bald, new-style Andre Agassi pitching it. And the digital Rebel, of course, has a six megapixel sensor. 1998’s holy grail. Ho-hum.

Even Christmastime’s hot ticket seems like the tip of the iceberg now, if you’ll forgive me for mixing my metaphors. Want a responsive camera? The recent Nikon D2H delivers. For half again as much money, Canon’s planning on serving up twice as big a sensor in a camera rumored to be very nearly as quick. They’re both so responsive they put most traditional cameras to shame. Like image stabilization? The new Konica Minolta A2 will have it built into the body — and so will its forthcoming Konica Minolta DSLR sibling, based on the Maxxum 7, instantly transforming all Maxxum lenses into IS lenses. (That should shake things up.) Sony’s got a four-color 8-mp sensor, for more accurate color. Olympus’s cool new C-8080, which looks almost like the E-20 and C-5050 hooked up and had a kid, has a lens to die for. Lexar’s newest Compact Flash card has as much capacity as the hard drive on my aging iMac (and makes me wonder just how long it will be before most digicams have built-in memory, dispensing with removable cards altogether). HP is providing 5-mp in a consumer digicam for just $350, a lower-level pricing breakthrough. There’s now a consumer digicam with a Foveon sensor, for those who wish to catch the wave of the future now. Want image quality for large output? You’re no longer limited to tethered cameras for your 16-mp and 22-mp backs, thanks to industry veteran Phase One. And let’s not forget Nikon’s D70: even though it’s a hundred dollars more dear than the digi-Rebel, it’s actually a full-featured camera, with no built-in limiting to price-protect its more expensive sibling. Olympus and Pentax will both debut dual-purpose cameras that capture video and still images equally well (or equally badly, but that still remains to be seen; for now, let’s keep things positive). Heck, there is such a cascade of new announcements, so many revolutionary new products, that staid old Leica even bestirred itself to announce an imaginary product it wishes it could make. (Aren’t I bad? See, that’s the kind of thing I could never get away with saying in a print magazine. No big deal, though, it’s just the internet.)

That longtime photographers should be feeling spoiled (as well as dazzled) makes perfect sense. All this progress has tumbled pell-mell down the pike in such a short time. It’s barely been six years since my little brother passed me that little 2-centipixel Agfa over the egg foo yung. In the 1980s, it took nearly that long for the market to get used toautofocus, for Pete’s sake. A decade earlier, it tooklongerthan that to convince pros that cameras with automatically-coupled, built-in light meters weren’t going to bring artistic creativity in photography to an end. (Today’s pros have to be just a wee bit more flexible in their thinking.)

There have been some casualties on the other side of the aisle, of course. Fuji quietly discontinued several of its large, bargain-priced medium format cameras. Bronica has brought to an end the long reign of the SQ-Ai, its Hasselblad knock-off. The Hexar RF (RIP) was a victim of the Konica Minolta merger. Rumor has it that Kyocera is going to quietly phase out its manual-focus SLR line, although Arias are still available here, RXII’s are still available in Japan, and NOS RTSIII’s should continue to be available till, oh, 2050 or so. (There I go, being bad again. Somebody slap me.) And film, although still selling well, is in decline. Dan Karp has formidable challenges ahead…even the most stalwart and skilled of helmsmen have a hard time in hurricanes.

And unfortunately for consumers, the very best digital camera is not at the PMA (Photo Marketing Association) show in Las Vegas. Although it’s made in North America, it’s out of this world. And it’s only a 1 megapixel camera, too. What am I talking about? Well, perhaps the mystery will be solved when you hear where it is: it’s on top of a five-and-a-half-foot stalk on NASA’s Spirit Rover, on the surface of the planet Mars.

The Spirit Rover camera, which weighs nine ounces, is a tri-color camera. Unlike on a Bayer array, each pixel doesn’t have its own filter. Rather, the pixels just capture luminance value for each of three color filters, and the colors are put back together by computer. (The camera on the Hubble Space telescope, which George Bush for some insane reason wants to kill, works the same way.) Panoramic images are captured by separate exposures that are patched together seamlessly after the fact. 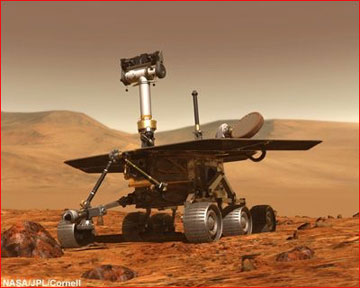 Now that’s a digicam: the Spirit Rover’s pancam sits atop a mast
to provide an approximately "human height" view of the red planet.

So why is it the world’s best digital? Actually, I suppose the accolade might be legitimately disputed from a practical perspective. But the 12 x 12mm CCD made by Canada’s Dalsa Corporation (each pixel approximately four times the size of those on a 5-mp consumer digicam) is built to a standard unknown in cameras we can buy. The Spirit Rover camera’s lens puts any Sony Zeiss, Canon L-series, or Olympus digicam lens to absolute shame, too. Of course, if they had NASA’s lens budget….

And despite the fact that Pentax has been selling its wee Optio S like hot rum toddies at a pirate convention, like Hondas to homemakers, like porno to perverts, like (*SLAP!*) ouch!…uh, as I was saying, despite the fact that Pentax has been selling lots of Optio S’s, the Optio S isn’t the world’s smallest digicam — oh no, not by a long shot. That honor goes to a $450 camera manufactured by Given Imaging in Israel, another country not noted as a hot spot of the camera biz. The camera is called the M2A Capsule Endoscope. It’s the size and shape of a large pill, and its purpose — pretty much its only use, in fact — is to radio-transmit 50,000 photographs of your small intestine to a recorder clipped on your belt, which you later turn over to your doctor.

You see, you are intended toeatit. Pardon my French.

Well, not eat it. But swallow it. You swallow it just as you would a pill, with water. It then goes on a voyage that would have astonished even Jules Verne, and is recovered when it, ah, re-enters the atmosphere. Due to the nature of its journey, the pill cameras are not re-used.Or so they tell us…. 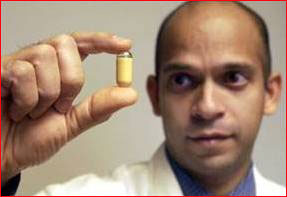 Even smaller than a Pentax Optio S!
Then again, you’re not supposed to eat your Pentax.
Photo by Buzz Orr.

Of all the wondrous happenings in the desert this week, however, I think the most interesting to me is Fuji’s Super-CCD SR technology, currently available only on a consumer digicam (called the S700) but soon to grace a mid-level amateur camera (the forthcoming S20 Pro) and Fuji’s top-of-the-line digital camera, the just-unveiled S3 Pro DSLR. The SR technology certainly hasn’t taken the world by storm, but as one who has toiled in darkrooms for years struggling to control contrast, it seems to me the innovation that’s most promising in terms of artistic photography. As you probably know, in the Super-CCD SR, each pixel sensor is broken up into two different areas — a larger one of normal sensitivity and a smaller one of lower sensitivity, to ensue that highlight detail beyond the range of the larger sensor is captured. Fuji’s S2 DSLR has quietly earned a devoted following based largely on image quality. Even if the SR advantage is as subtle on the S20 Pro as it is on the S700, however, I’m still going to await with great interest the verdict on its application in the S3 Pro. The S3 may not be the biggest or the fastest or the highest or the cheapest in Vegas, but for fine printmakers and digital art photographers, my guess is that it’s going to prove a development to watch.

And finally, what aging camera-curmudgeon like myself can resist the Panasonic Run-DMC? (It’s actually called the Lumix DMC-LC1, but I can’t remember that even when I try, so I call it the Run-DMC, after the now-historical rap group. That, I can remember.) It’s a recreation of a 35mm camera in digital. Well, all right, it’s a recreation of a Leica rangefinder in digital, more or less. It’s even got a Leica lens, one that covers all the focal lengths any slice-of-life photographer needs, namely, from 28mm to 90mm in 35mm equivalence. How big is it? Small enough, Bub. How many megapixels? Enough, Bub. How cheap? Cheap enough, Bub. How fast is the lens? Plenty fast. How cool is the Run-DMC? Plenty cool, man. This one could put some serious hooks into camera buffs.

Regardless of what catches your fancy, though — and it might of course be different from what catches mine — what’s indisputable is that PMA this year is a splendid cornucopia of innovation and technological development that exceeds anything that living photographers can remember. The new stuff may not be allequallygood, but man, oh, man, it’s all good.

The “Real” Factor – Evolution & Revolution In The Digital World

EVOLVING YOUR PHOTOGRAPHY INTO CINEMATOGRAPHY. Episode 01 – Stills to Motion – The Translation

FacebookTweet The goal of this educational series is to provide inspiration on how you can successfully transition your photography into cinematography.  Often, when photographers start