If you’re involved in sports, you probably have a hard time believing things. The year you just had ("we had an unbelievable year"), the way you just played ("I played unbelievable out there"), the opportunity you were given to play for the team, the "whole organization" you’re playing for, the fact that the ball went into the basket or out of the ballpark or whatever it was supposed to do. It might even be necessary to point out to non-English-speakers that when one of our athletes says someone is "an unbelievable guy," he is not necessarily calling him a liar.

It’s well known that, in our culture, we strongly encourage our athletes to finish college, where what they mainly learn is how to refer to themselves in the third person and speak entirely in clichés. This is to train them to give the appearance of saying something when they speak, while at the same time allowing them to say nothing. (As is also well known, when an athlete slips and actuallydoessay something, it’s often news. For instance, when an athlete is accused of domestic violence, the whole organization would definitely not find it unbelievable if the athlete were to slip up and blurt out, "bitch disrespected [insert athlete’s own name]!" Likewise, at the post-game press conference, the organization does not want the athlete pointing out that the coach is a flustered cretin who took leave of his senses at the worst possible time during the game, even if that’s exactly what happened.) 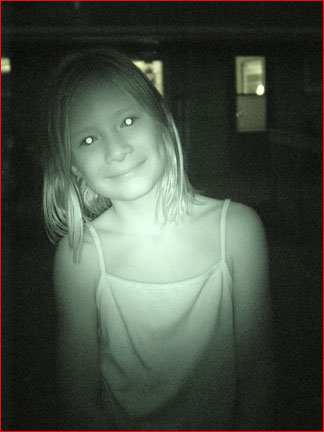 "Rosie," taken in the dark by infrared illumination (Sony F-707)

For photographers, too, clichés present inviting opportunities for appearing to make pictures while not actually saying, or meaning, anything.

The urge to make clichés stems from a desire to make pictures that look like everybody else’s pictures. Why would anybody want to do this? Personally I think it’s because it relieves us from having to rely only on our own judgment when evaluating what we’ve done. Photographers, far more than other kinds of artists, are perpetually insecure about whether what they’ve done is going to be accepted as good. I also think photographers like clichés because, at an early stage of our development, it’s a way of demonstrating competence and accomplishment. You can tell you’re in this stage because the phrases "that looks like a professional took it!" and "it looks like a postcard!" are construed as compliments, and make us swell up with pride. (Later, of course, those kinds of comments become insults.)

So what’s a photographic cliché? As with pornography, you’re supposed to know it when you see it. I suppose we might define it as "conventional subjects shown in a conventional way." That this leaves each of us to define "conventional" for ourselves is probably a good thing.

Conventions, of course, change. In the style known as "pictorialism" — largely defined through the journalCamera Workby Alfred Steiglitz, who later grew bored by it — it was conventional, for some reason I never understood, to include a large glass globe in many pictures (guild secret? Masonic talisman? Esoteric symbology? Beats me). During the Eisenhower years, it was conventional that pictures be robust, cheerful, forward-looking, even heroic (which fortunately didn’t hamper the ebullient Eisie, one of the great photographers of those days). Lately, convention can be found on tony art-gallery walls, where "photographers" no other photographers have heard of display fey, fatuous, flat, fuzzy, foreboding photos of nothing, interchangeably.

If you’re smiling at that, don’t get cocky. Amateurs are even worse. Afterlast week’s column, Ken Croft (who gets the blame for triggering these latest rants of mine, by the way) observed:

I can now fully understand the fascination of the Nun in Venice. When I said I didn’t like it, I thought that was the truth. If I analyze my thoughts, I probably dismissed it because I subconsciously realized that I would not expect my immediate friends to like it, if I had taken it myself. I guess I have drifted into taking pictures that friends and family will like, or that might win competitions, in order to win admiration and approval, rather than taking pictures just for myself.

That’s an acute, perceptive insight. After twenty years (I’m not gonna start saying "twenty-five" until I absolutely have to) of teaching and writing about and learning about photography, I firmly believe that Ken’s insight describes what many of us do (or try to do), at least at first, and sometimes for many years. What informs the taste of people who pursue clichés, then, istheir idea of the taste of others. Not the actualtasteof others, mind you, but just the photographer’s best attempts at second-guessing.

That’s no way to live. As with many things, photography is often about self-confidence. The point is not so much to learn what other people like — that’s ultimately a fool’s errand — but to learn whatyoulike. Only by identifying your own concerns and becoming comfortable with your own taste will you stand a chance of developing an organic style, or signature, or way of seeing, that is neither imitative ("designed to be like something else, but usually inferior to the original") or derivative.

I think this is why rebellious and nonconformist teenagers often make the best photography students. They don’t want to conform. They don’t work to please.

We each are stuck with using our own taste as the foundation for what’s good or bad, because the taste of others is so varied and unpredictable. If I found one person who loved one particular picture of yours and and gushed about it on and on, praising it to the skies, and another person who hated it and pronounced it worthless, what would that teach you? If you learn your own taste and cultivate self-confidence, you can be secure in the face of either reaction.

When you know with a quiet but solid confidence that you truly like one of your pictures and you’re not shaken in the least when someone says, "What the hell is the point of that?" or "I hate that!", you’re there.

Go for it. Dare to be different; be yourself. Eschew cliché.

HEY! Please subscribe to Mike Johnston’s paper newsletter, "The 37th Frame", before he has to decide how many copies of Issue #5 to order!

SMP Book of the Week 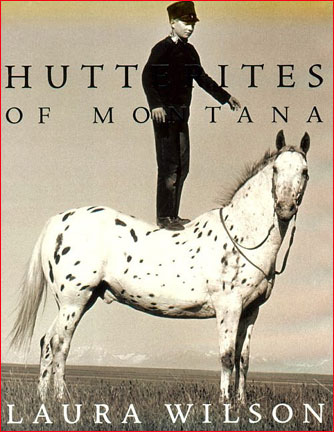 Laura Wilson is a commercial photographer who was Richard Avedon’s assistant when he did the photographs forIn the American West; you can see traces here of the hard, bright style of the professional. And given the subject — picturesque Anabaptists — one could be forgiven for jumping to the conclusion that this is another "folksploitation" book wherein a strange and odd minority are plumbed ruthlessly for the sake of pictorial stereotypy.

But that would be wrong, I think. Laura Wilson spent a great deal of time over a number of years with the Hutterites of Montana (the other two major, and better known, groups of Anabaptists in America being the Mennonites and the Amish; and Hutterite colonies are also found in North Dakota and Canada), and gradually won their trust and friendship and overcame their innate refusal to be photographed. I have to confess up front to a weakness for the American West and for pastoral lifestyles in general — or perhaps just sentimental idealization of pastoral lifestyles — I loved the movie "Witness," for instance — so perhaps I’m a sucker for this type of book. But then again, I haven’t seen many books on the Amish that I like, despite liking the Amish. For the reader/viewer, Laura Wilson has created a legitimate experience of real peoples’ real lives that helps us understand and get to know this essentially foreign minority who are (technically, at least) in our midst. I wish Laura Wilson would do a similar project on the Pine Ridge reservation.

There’s a slight ambiguity about presentation. Many of the pictures, in some cases the best ones, are filleted across both pages of a spread and thus split down the middle by the gutter. Normally, I at least dislike, and sometimes as much as loathe, this all-too-common design failing. Most photography books are too big, and most photos in books are too big, as if book designers are afraid we won’t see the pictures otherwise. But inHutterites of Montana, while this design device sort of doesn’t work, it sort ofdoeswork, too. I have to admit it seems to suit the wide open spaces of the Montana plains, the big skies, silos, and far-flung flocks of sheep. I guess I decided not to mind it, and so, perhaps predictably, didn’t. But you might, especially if you’re typically annoyed by photos arbitrarily broken in two.

I tend to like pictures which show me something interesting about real life, so I appreciated learning about the Hutterites and seeing them through Wilson’s sympathetic, humane eye. The book balances pictures and its well-written text nicely. The pictures are well done: they earn one of my highest accolades,honest. That they and/or their subjects are also often beautiful is a bonus. The printing is above average even by today’s high standards.

In sum, a nicely conceived, nicely executed, well-made book that I enjoyed, and am pleased to add to my shelf.

* Content: B
* Reproductions: B
* Presentation: A or C, depending (see review text)
* Bookcraft: B
* Synergy and intangibles: B

“Middle Of The Day Photography” Is Not Always Bad

FacebookTweet It is “De Rigueur” for serious landscape photographers on location to get up before dawn, having previously scouted the location, so as to arrive

I know. I know. "Best Of The Year" awards are such a cliché. Well –mea culpa, is all I can say. I think they can