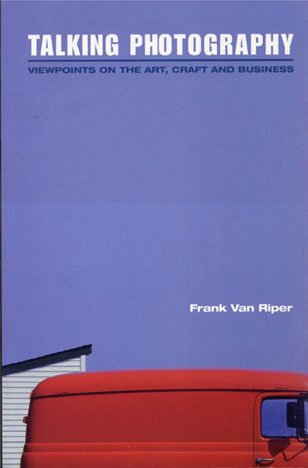 If there are two kinds of everything, then there are two kinds of books about photography. The most useful kind shows photographs. This has been, for most of photography’s history, an extremely important element of the photographic enterprise — it’s how most photographers have presented the best of their work for scrutiny and how the greatest photographers have secured their work in the canon. It’s also a big part of how they, and we, keep up with the work of other photographers. Newspapers and magazines are important, but evanescent; advertising is remunerative, but credit lines are seldom given. In books, the photographer has historically had the most control over how her pictures have been selected and presented.

The other kind of book are writings about photography. Most of these, I grant you, are technical books, which tell you how developer chemistry works, or how to control off-camera flash, or else they document in excruciating detail the history of Exakta cameras, say. But some are books actually meant forreading: books of history, essays about photography or photographers, books explaining why certain critics love or hate certain photographs, and so forth. Naturally, I like looking at pictures best. (Who doesn’t?) But of the other kind, these books you can read are my favorite.

Frank Van Riper’sTalking Photographymay be the friendliest book of essays about photography ever written. It’s aptly titled: Van Riper has an easy, relaxed writing style that does indeed read very much like someone talking. His deceptively simple prose, which is articulate, and even erudite when needed, flows like water, naturally. Although they’re almost all in classic essay form, each of the book’s nearly one hundred pieces was originally a weekly newspaper column written forThe Washington Post, so they’re also short and sweet.

I don’t even think thatoncein this fine, solid book did I catch Van Riper talking down to his readers, or talking over their heads. He addresses us as equals. All you have to do is think about the discourse on your favorite online forum to realize that this is harder than it looks.

Since anyone who writes a weekly column has, cumulatively at least, rather a lot of space to fill (gee, how would I know?), the tendency is to range widely, and Van Riper does. But he makes it an asset, turning his gentle gaze on all sorts of subjects evenly; the effect is to leave nobody out, leave no reader behind. Unlike scholarly writers, for instance, he writes frequently about practical issues, including equipment and techniques. Unlike many critics, he can write about the life of a pro from the inside, since he’s a working photojournalist, and an accomplished one: his portrait of Stephen King, for example (one of the essays tells you all about how he made it) is in the collection of the National Portrait Gallery, and is one of King’s own favorites. But unlike many photographers, he also has a deep knowledge of art, and a critic’s eye for what’s good.

Some art critics don’t write in English. I don’t mean they write in German or Urdu; I mean they write in a lingo called "artspeak," a sort of insider’s code meant to signify a lot and communicate as little as possible. By contrast, here’s a brief snippet of Van Riper’s prose:

…I never had much of an appreciate for nature. Nature meant animals, bugs, and sleeping on dirt. Nature meant there was no place to get something to eat.

When I was a Cub Scout, I passed the tree-climbing requirement by scrambling up a chain-link fence. (This is true, I swear.) Later, when I was a Boy Scout, I figured I’d learn about outdoor living by following the example of my troop leader, who kept our campfire going by throwing cupfuls of lighter fluid on it.

As you can see, this is not the style of somebody who’s out to baffle you with bull. In fact, Van Riper makes almost any subject easy to relate to, whether he’s talking about the ideal studio-retreat, or the M6, or photographing brides. (Even the introduction is good to read.) His taste is trustworthy, too: when he profiles a photographer, it’s somebody you should know about. When he interviews somebody, it’s because that person has something to say.

Try this: if you come across the book at your bookstore, look at the table of contents and pick out the subject you think you’ll find most tiresome, or least interesting. Turn to that essay and read it while you stand there — which you can do without annoying the bookstore clerk, since it’s only a couple of pages. If you do that, I bet you’ll buy the book.

After years of working for photo-hobbyists, I’m still often amazed by how many people who claim to like photography don’t like to look at pictures. (Really, some don’t.) Some people don’t like to look, period: my lighting instructor in photography school told me that the hardest part of his job was getting students to simply look at the light. And it surprises me — although I know it’s true — that a lot of photographers don’t like to read about photography. But that last group obviously doesn’t include you, because you’re here, reading this! Therefore, to you, a warm recommendation forTalking Photography, a fondue of friendly short pieces ideal for dipping into.

A grateful thanks to those stalwart few who have shot me a few bucks, or at least a few cents, over the past couple of weeks. For those very few who have objected, please note that contributing is VOLUNTARY — you’re not obligated, and please, do not feel coerced. If, on the other hand, you would like to pitch in, please gohere. And many thanks.