Mike Johnstonwas Editor-in-Chief ofPHOTO Techniquesmagazine from 1994-2000. From 1988 to 1994 he was East Coast Editor of the late and much lamentedCamera & Darkroommagazine. Consequently he has been one of the most influential editors on the American photographic magazine scene during the past decade.

Throughout the past two decades he also was the author of a broad range of technical articles and equipment reviews, as well as several considered examinations of the art and techniques of photography.

In June, 2001 I began regularly publishing on these pages a continuing series of Mike’s previously published writings as well as new material which will be exclusive to this site. Whereas magazine articles are ephemeral, a web site such asThe Luminous Landscapeallows material of lasting value, such as Mike’s writing, to have a permanent home.

Mike was my editor during his tenure atPHOTO Techniquesand I also count him as my friend.  I am now more than pleased to be his publisher. 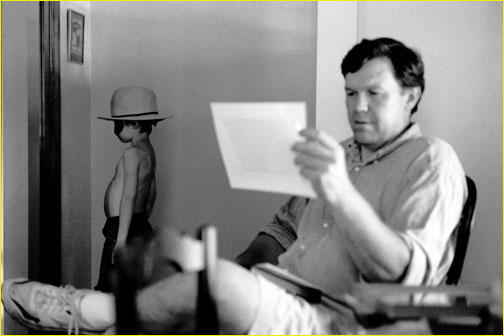 The Photographer as Auteur

Written by Mike Johnston,the 37th Frameis intended to entertain, inform, and amuse. Published seasonally, its contents are all new, entirely about photography, written exclusively for the newsletter, and not available from any other source. The 37th Frame is available by subscription only. No advertising is accepted.

The Scoop ‚ This is where we dish the dirt.Good is the reward of the good, but the scoundrel gets his just desserts.

The Lens Test ‚ A  subjective aesthetic appraisal of a different lens in each issue.Pour le connoisseur.

The News ‚The rest of what youÃ‚¹ll need to know from me till next we meet.

Mike Johnston graduated in 1985 from the Photography Department of the Corcoran School of Art in Washington, D.C., where his photographic mentor was the late Steven Lee Szabo. Initially a photo teacher who taug... [ Author’s Page and Articles ]

Mike Johnston graduated in 1985 from the Photography Department of the Corcoran School of Art in Washington, D.C., where his photographic mentor was the late Steven Lee Szabo. Initially a photo teacher who taug... [ Author’s Page and Articles ]