This report contains two major comparisons. I wanted to see how the newly releasedProvia 400Ffilm performs and decided that it would make sense to compare it both toProvia 100Fand to the newCanon D30digital SLR when set to both ISO 100 and ISO 400. In the past few months I’ve switched most of my 35mm work to the D30 so this was a relevant comparison for me.

Answer:Life is short, death is long and I’m busy enough as it is.If you would like to do such tests please let me know the results.

Provia 100Fis my standard film. I hardly use anything else. But, from time to time I need something faster. I’ve never found a film though that gave me results at ISO 400 that I’m really happy with. About a year ago Itesteda variety of ISO 400 films and pushed 100 films. Nothing really impressed me. WhenProvia 400Fwas announced in September, 2000 I was very keen to test it, but it was only in January, 2001 that it became available in Canada, where I live.

Whenever I do a comparative test I get countless emails, letters and smoke signals asking why I did things the way I did and why I didn’t do it some other way. I’ve had to grow a thick skin on this. I do things the way I do because it seems like a good idea at the time, and more importantly, it seems like it will tell mewhat I want to know. Remember, I do these tests first for my own edification. Only afterward do I write them up for publication here or in a print magazine. If you find my methodology faulty, please feel free to run your own tests and let me know how you make out, and how they differ or agree with what I’ve done. There’s nothing like doing ones own tests, and of course discovering how much work is entailed even in a simple one!

The Equipment and Venue

Three cameras were used. ACanon EOS-1Vwas loaded withProvia 100Fand aCanon EOS 3withProvia 400F. The digitalCanon D30was used at both ISO 100 and ISO 400 settings. The only lens used was aCanon 50mm f/1.4. All photographs were taken at f/5.6 (optimum aperture), in aperture priority mode. All photograph were taken hand-held and I physically moved back and forth to change framing so that the 35mm and the digital frames were approximately the same magnification. (Remember, the D30 has an imaging chip smaller than a 35mm frame and focal lengths need to be multiplied by 1.6X to compensate.) Therefore, the 50mm lens acts as an 80mm lens on the D30. This explains why framing and perspective aren’t alwaysexactlythe same.

Nocolour correction has been applied to any of these images.Noexposure adjustments have been done in post processing. Scans were done with the identical scan settings for each comparative frame and the only digital processing done was the application ofUSMinPhotoshop.D30images were shot inRawmode and similarly only have hadUSMapplied inPhotoshop.All scans were done using a high-endImacon Photoscanner at 3200 PPI. I repeat —noLevels,CurvesorColoradjustments have been made to any of these images — film or digital. No adjustments or allowance has been made for the slight differences between metering in each of the three camera or possible shutter speed variances.

Since the test was conducted in Toronto in February I chose the local botanical gardens as venue. It’s warm and colourful — something that can’t be said this time of year about the rest of the city. (What is that guy doing with three cameras around his neck, taking lots of identical shots of flowers using only one lens? Weird.) 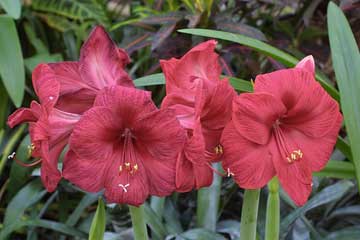 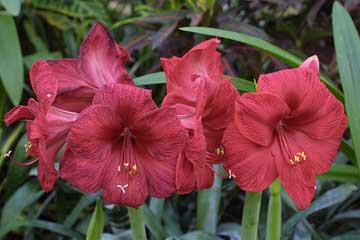 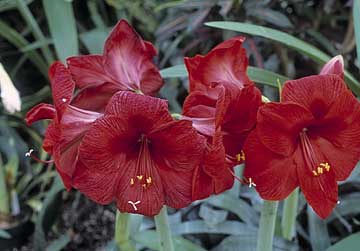 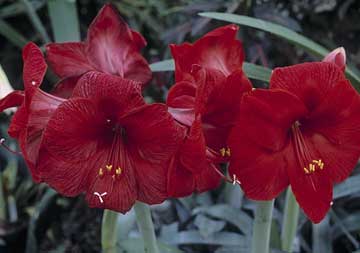 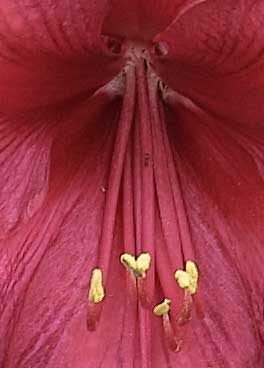 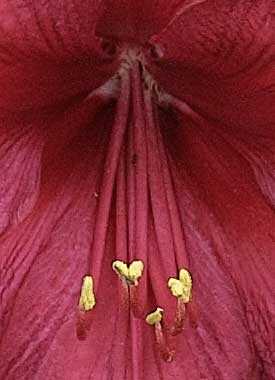 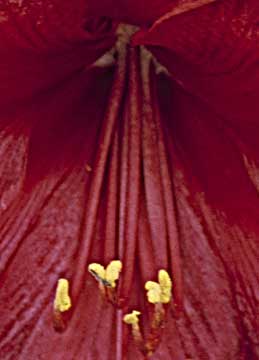 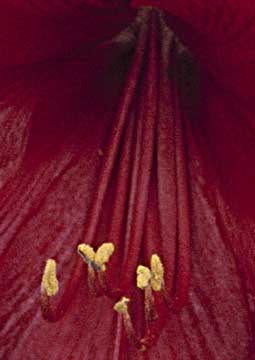 There is an obvious difference between the way the D30 reproduces red and how Provia does it. Provia is more saturated. Colour rendition between 100F and 400F is similar with the 400F appearing a bit denser; (could have been the in-camera metering or shutter variation).

The difference in "noise" between the D30 frame at ISO 100 (essentially none at all) and the D30 at ISO 400 (modest) is interesting to compare with the difference between Provia 100F and 400F. In the film comparison 400F is significantly grainier. Comparing the D30 at ISO 400 Vs. Provia 400F there is no way to avoid the conclusion that the D30 at this speed produces amuch less noisy (grainy) image.

When comparing shadow detail, in both cases the 400 speed shows reduced shadow detail but again the D30 is superior in comparison with Provia at both speeds. 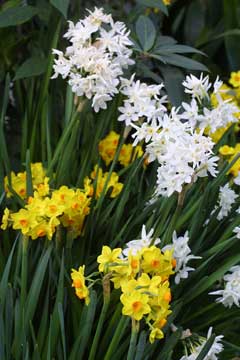 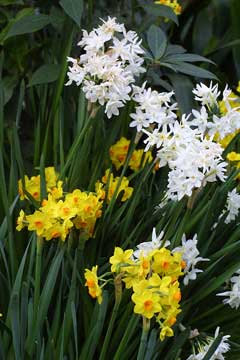 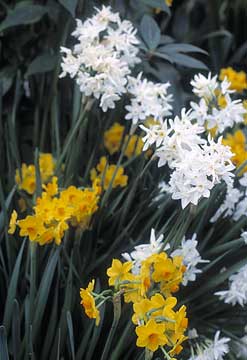 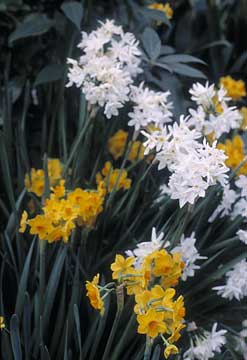 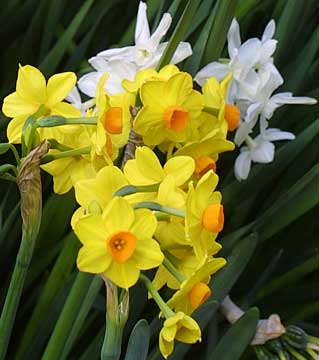 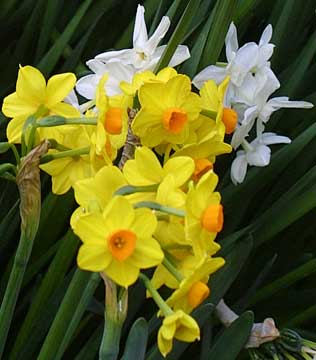 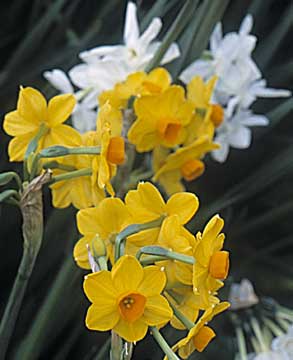 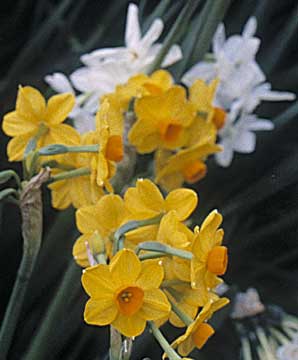 Please Note:The exact point of focus on these images is somewhat different. This shouldn’t affect ones ability to evaluate grain, shadow or highlight detail, as well a colour rendition.

This time the D30 did a much better job of colour reproduction. The yellows are quite accurate while the Provia yellow is more orange. D30 greens are also richer — less cyan. Dynamic range appears to be better on the D30 with less blown-out whites combined with a bit more shadow detail at both speeds. The move from ISO 100 to 400 on the D30 shows, as usual, a very slight increase in noise/grain. Provia 400F, on the other hand shows a marked increase in grain over Provia 100F.Compared to the D30 at ISO 400 Provia 400F is much grainier.

In addition to the two examples reproduced here I also did three other sets. I haven’t bothered publishing them because they all show essentially the same thing. The only real variance is the difference in colour rendition, and this can easily be compensated for or adjusted to taste in Photoshop.

As for Provia 400F, I must say that it’s the best 400 ISO transparency film that I’ve yet seen. I know this isn’t a comparison against other ISO 400 solutions, but subjectively that’s my evaluation. (My test of ISO 400 solutions from last year can be foundhere).

It could be that there are ISO 400 negative films that give it a run for the money, but I’ll leave that test to others because I don’t care to shoot or scan negative films for reasons discussed elsewhere on this site. So, when I need an ISO 400 film in 120 format I’ll definitely be using Provia 400F. But not not in 35mm. Why? Because the D30 at ISO 400 is head and shoulders above it.

Even when viewed on this web page at relatively low screen resolution (72 ppi Vs. prints at 240 ppi) the difference in grain between the D30/ISO400 and Provia 400F is obvious. Dynamic range is slightly better and prints look closer to ISO 100 film or digital. No one would ever mistake a Provia 400F print for one shot at a slower speed.

Please note that I’ve made prints of all of these comparisons and my conclusions are based on print evaluationsnoton-screen. On-screen results simply mirror those made from print evaluations.

While not intended as a comparison of the D30 at ISO 100 and Provia 100F scanned with the Imacon, it’s hard not to see the results. As discovered when Ifirst tested the D30, I find that in 8X10" prints the D30 shows superior image quality. Of course 35 Megabyte scans inevitably will show greater detail in large prints, but when ressed-up to 12X17" it’s very hard to choose between them on the basis of resolution and detail. Quite remarkable.What’s the 6 Megapixel pro Canon digital going to be like?!

Take the 12.2 Megapixel Sony-fabricated sensor that's likely the same one found in the Nikon D300, put it in a pocket-sized Leica-designed body with a