How Many is Too Many?

Good morning! A few days ago, on a mailing list I frequent, the regular denizens got into a discussion about how many lenses you really need. Perhaps predictably, one fellow, affably and perhaps not terribly seriously, said "You can never have too many." Since this has always been something I’ve had strong opinions about, I thought I’d broach the subject this morning. But first, a disclaimer: I know full well that this is a topic that every photographer already has her or his own opinions about. That’s fine. I’m not trying to dictate to anybody, or to be argumentative. This is just my own take on the subject, presented to you as food for thought, nothing more.

So now, on to a few idle thoughts about lens kits.

For most of my photographic life I’ve gotten by with just a few lenses at a time — often just two, and more recently (I admit, partly as an exercise in self-discipline) just one. I don’t get bragging rights for this, however, because, as people are quick to tease me about, I don’t use any particular lens for long — I skip from camera to camera and lens to lens. I’m as much of a camera-dork as anyone.

Any kind of specialist photographer will immediately recoil from the suggestion that photographers couldbenefitfrom having only one or two lenses. Lenses can allow access — to tiny things or to far-away things, and to exotic angles of view. More lenses are usually needed for more specialized work or for different kinds of specialties, which is why pros tend to own the most.

But many photographers who are more independent, or who make reputations for themselves as art photographers, use fewer lenses. Garry Winogrand’s "normal" lens was a 28; Edward Weston was as severely ascetic as anyone who ever lived when it came to equipment. It’s difficult to call Sebastiao Salgado a true photojournalist, since he doesn’t have an editor telling him what to shoot or how to shoot it. But (when I heard him interviewed, at least) he was shooting with a 28, 35, and a 60, with one body for each lens. And that’s all. 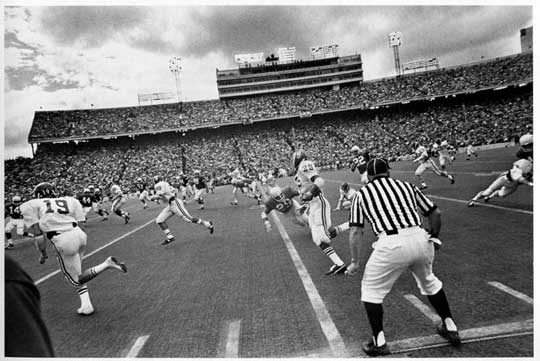 You need long telephotos to shoot sports, right? Hmm. John Szarkowski said of this shot that it may be the only photograph ever taken from the sidelines that includes all 22 players on a football field. Photo by Garry Winogrand.

I was fortunate to get a tour of the New York offices of Magnum Photos from the late Erich Hartmann, who at that time was a past President and, of course, a longtime member of the cooperative. As I stood in the archives looking at row upon neat row of the looseleaf proof-books that held negatives by Henri Cartier-Bresson, Erich told me that his friend Henri typically carried a 35, 50, and 90. However, he continued, you could go through entire books of those proofs and not see a single shot that looked like it had been taken with the 35, and only a few that had been taken with the 90. Although Cartier did like to experiment with lenses, his "standard" lens from the time it came out in 1953 was always the collapsible 7-element 50mm Summicron. Rumor has it, however, that the factory later custom-multicoated his personal lenses. I have no idea if this is true, but it sounds plausible. 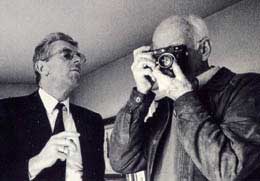 Henri Cartier-Bresson checking out a new Leica camera in 1988. The lens, however, is the vintage collapsible 50mm Summicron with which Cartier did most of his work.

When I was a Contributing Editor for the oldCamera & Darkroommagazine we did a pretty extensive CompuServe survey that I wrote up for the magazine. We wanted to determine what a basic kit of primes would be for most photographers. The consensus that emerged was that an "average" kit would consist of four lenses: a 20 or 24; a 35 or 50; an 85, 90, 100, or 105; and a 180 or 200. Many people, if allowed a zoom, would have replaced the long lens with an 80-200. The only significant departure from this norm was a significant minority of wildlife or sports shooters, who would skew their kits towards longer lenses; one such guy, for example, used a 24, 80-200, 300, and 400. However, almost as if the group on CompuServe were prescient, an Israeli photojournalist I interviewed not long thereafter told me he carried four lenses: a 20, 35, 105, and 200.

If you think about it, many lenses are specialty devices, intended for a specific range of applications. Interchangeable-lens 35mm SLRs are much more flexible than most other cameras, and can do more things well. So what are the main applications for specialized optics? Here are the ones I can think of, and their properties:

Now, obviously, if you were to go overboard in all of these categories, you’d have a bizarre kit indeed. Let’s take a quick look:

For macro shooting of the highest order you might haveZeiss’s 100mm f/2.8 Makro-Sonnar T*autofocus lens for contax mount:

For a high speed lens, maybe aLeica F/1 Noctilux(I know, this is for a rangefinder. I can’t resist. Who in the world has ever actuallyboughtthe Canon F/1?):

For something a little wider than the average 20mm, you might have to search the used market for this little piece of glass, the over-the-topNikkor 13mm f/5.6.

Want a telephoto to bring the far near? Why mess around — get a good long one like the Pentax 1200mm f/8.

And as for zooms, I’m not even going to choose. Most people who covet lenses slaver over fast, high-range zooms these days — I don’t — and you’ll know which gleaming, high-dollar F/2.8’er you’ve been coveting lately.

The last category might not be a category at all, just a quirky enthusiasm of my own. And while there are lots of Tessar-types around that are the smallest SLR lenses you can buy, just for fun I’ll name the long-discontinued Olympus 40mm f/2 "Pancake" lens (not being a Tessar, it wasn’t really a Pancake). I remember seeing this lens on closeout for what seemed like forever in the early 1990s, going begging at the pricely price of $69. I hopethis linkstays active long enough for you to take a look:

Note the price. That’s typical for this lens these days. Who knows why? Maybe because a certain former magazine editor keeps plugging the darn thing. Stranger things have happened!

Obviously, no one is going to max out all the specialized capabilities ofall kindsof specialty lenses. We tend to pick our spots.

Anyone who uses a view camera or a rangefinder Leica almost by definition uses only a few focal lengths, although as wealthy hobbyists have invaded the domain more and more people are found amassing large collections of lenses even for those devices. The principle seems straightforward: the more lenses you have, the better equipped you will be to handle any situation you encounter; and, he who has the most toys, wins.

Without arguing my point too militantly, maybe I should just point out that I am reflexively a teacher, and many of my opinions and talking points are didactic. I think it’s useful, for example, to give ourselves exercises — not because they’re the only way or the best way to shoot, but because they have the potential to teach us valuable lessons, and to hone our skills. For instance, although I’m thoroughly sick of "Leica bolsheviks" and Leica snobbism (Cartier-Bresson himself said he couldn’t stand people who take themselves seriously instead of taking the world seriously, Nicole Rubbe tells us), and not nearly as enamored of the marque as I once was, I still think that any ambitious 35mm photographer should, as an exercise, shoot with nothing but a Leica rangefinder for six months or a year, no matter what he or she does before or after. That camera is a photography teacher. Similarly, the exercise of picking one prime lens and shooting with it exclusively until you’ve forgotten what other lenses feel like is a learning experience that you will carry with you for the rest of your life. Don’t think so? Ask any photographer who’s done it.