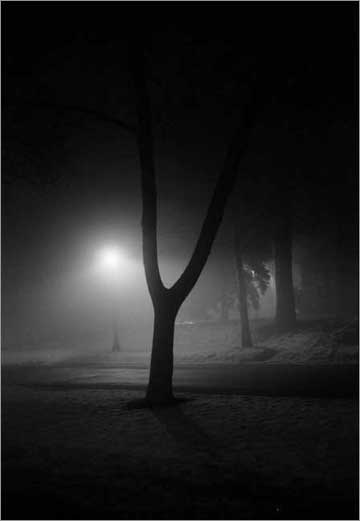 Good Morning! One of the pleasures and benefits of writing this column every week is the steady volume of mail it generates from interesting people all over the world. Last week’s column, "Confessions of a Cameraholic," obviously struck a chord in this respect — I heard from a number of people who had some sort of response to it, including many rueful accounts of peoples’ own "cameraholism." This week, I thought I’d share with you a couple of the more remarkable e-mails it generated.

The first one comes from Alan Clark, in England. I responded to Alan that I didn’t know whether to thank him or not! But he assures me that his intention to go cold-turkey on photo writers was tongue-in-cheek. Actually, I’m not so sure that’s such a bad idea…and I’ll leave it to you to figure out whetherthat’stongue-in-cheek or not!

I’m a big fan of your Sunday morning essays and have to tell you that I thought last week’s was one of your best yet. Six days later I’m still thinking about its implications.

I was very interested in your description of how you started off with such strong ideas, but failed to realise them by getting sidetracked. I’m sure this is pretty common. It has certainly happened to me.

As a personal millenium project I decided to look through all my negatives and from them make my definitive "best" fifty prints. Looking at these prints was a sobering experience, I can tell you. I started in photography with a very clear idea of what I wanted to do, and like you was hoping to create a homogenous body of work. But what I was looking at in these fifty prints was a mish-mash, with very few prints even coming close to expressing what I wanted to say.

I thought at the time that at least they represent a learning curve. But after reading your article I see now that they actually represent a whole series of sidetracks.

When struggling in the darkroom, I’ve often thought that photography itself is a distraction. I should be out fishing instead, or shooting my longbow in the woods. When things get really frustrating I sometimes think that taking up photography in the first place was a distraction from painting, which in any case has always been my main creative activity. (I don’t normally think that. Black & white photography is really a nice complimentary activity to painting.)

What your article has made me realise, however, is how easily I get sidetracked by photography writers. this really shows up in my "best" fifty prints. The last time I was sidetracked was by an article called "The Glow." It was really persuasive. Despite the fact that it was about making prints with a certain look that was very different to the look I’ve been struggling for ages to achieve, the writer of this article even had me buying a new camera, something I hadn’t done in years — a Spotmatic with a 50mm f/1.4 lens. God forgive you!

You may recall that I e-mailed you with a query about this. Incidentally, I got it in the end, in full working order, for £41, off eBay.

So what have I learned from your essay? You say it is too late for you to change and stop being sidetracked. But judging from your photograph inBlack & White Photographymagazine I’d say you were younger than me, and I’ve decided that I am going to change. I’m going back to my first ideas, the ones that attracted me into photography in the first place. I’m going to put on a pair of blinkers and concentrate on ploughing a really straight furrow, instead of wandering all over the field. Honest!

Best wishes, and keep up the good writing, so I can ignore it.

Tongue-in-cheek or not, Alan’s resolution to put together his fifty "best" print is an astute move that I recommend to anyone. I’ve long held that holding shows or printing books are crucial exercises for photographers just in terms of artistic process, for just the reasons he describes. People say "why should I have a show, when no one will come and I won’t sell any prints?" But the fact is, every now and then we have to take stock. It helps to actually see where we’ve been and what we’ve done.

I’ve heard from Minnesota artist Glenn Gordon before, and this week I got an especially thoughtful gem of a note from him. Glenn is that rare species, the wise man. A lifetime in several different arts and crafts as both a practitioner and a critic — a better word would be "appreciator" — have not been lost on him.

Reading last Sunday morning¹s reflections, I think you may have your percentages wrong. From my limited exposure to your work, I think you are in fact 100% a photographer and quite a good one, but hamstrung by too much access to the emporium of gear, whose aisles stretch to the vanishing point. There’s nothing all that wrong with fondling beautifully made tools as fetishes, nifty toys, and splendid bits of kit, but it obviously can (maybe not so harmlessly) deflect a man from his innermost longing to make art. There are many guys, after all, for whom happiness consists of standing around with other guys all scratching their balls and comparing mileage on their pickups. They may hardly ever haul anything around in them, but that’s not the point. It’s the idea of a pickup that counts, or as a friend of mine says, "Image is everything…content is optional."

Fascination with the seductive paraphernalia of photography goes some way toward explaining that recurring longing in your writing for the austerity of the ascetic, stripped down to his loincloth and a single lens. One camera and one lens is all you ever have on the desert island of any moment anyway. At least part of what you admire about the guy you wrote about is his simplicity of means. Maybe gearheads are just born to be harmless gearheads, for whom the fantasy and jewelry of photography are sufficient protection from the existential terrors of doing any of it, but it raises a question: Is that forty percent part of you who posts his own photographs posting photographs that are only forty percent photographs?

I’m writing you like this from a quickening sense of life slipping through the fingers, the certainty of fewer and fewer trips to the plate. Suddenly I seem to know more and more people who are dying. It is disconcerting. The Armenian mystic, Gurdjieff, was helpful on this score. He once said something to the effect that a man should always keep two things in mind: one is that he is a fool; the other is that he is going to die. This, you would think, coupled with a chronic lack of money, would be inducement enough to keep it simple instead of slavering after goodies that will break us. Technology is voluptuous, but looking at the images that transfix us, the ones that drew you into photography, only a few of them are pictures of cameras.

It’s only a few days till Christmas, and doubtless many of us are embroiled in the happy, ditzy mix of socializing, family activities, and annoying obligations that the holiday season entails. I’m not going to get a camera for Christmas this year, although I did indulge myself and order a couple of books I wanted. But these e-mails and others remind me what a gift it is to be a part of the worldwide community of people who care about, and practice, the arts and crafts. To all of you, I raise a glass of good wishes and good cheer.

FacebookTweet Simplicity is the ultimate sophistication. Leonardo da Vinci 1 – Walking in a canyon I am walking down a canyon in Northern Arizona.  The