This Issue Only Applies to Non-Retrofocus Wide Angle Lenses
When Used on Technical Cameras.
Ordinary Phase / Schneider / Mamiya WA Lenses on DF Cameras Are Not Affected

By mid-May Phase One’s newIQ180back has started to ship to customers. Some of these photographers are using the back with technical cameras and non- retrofocus wide angle lenses. There have started to be reports on the web that there are serious colour cast and banding problems with this combination.

Indeed there are, but Phase seems to have anticipated this problem and has a solution at hand. Before looking at what it is though, let’s briefly summarize the whole issue ofLens Cast Correction(LCC).

With real wide angle lenses, the kind used on technical cameras, the rear of the lens sits very close to the sensor. An example of such a lens is the 43mm Schneider APO Digitar , which I happen to own and use on myAlpa STCcamera. This causes lens casts – where one side of the image appears magenta and the other green. This is caused by the light from these lenses hitting the sensor at oblique angles. (Remember – photo sites are like tiny wells. They have walls, and are happiest when light falls on them from straight ahead. When light comes in from the side, lens cast happens).

There are other types of wide angle lenses though, full retro-focus designs (such as Phase One’s lenses for the DF cameras) and semi- retrofocus designs, such as most of Rodenstock’s Digarons . These show little to no lens cast, while true WA lenses such the Schneiders when used on technical cameras do.

This has been an issue with medium format backs when used on technical cameras for a long time. But, with the IQ180 it’s worse than I’ve seen with the P65+, though possibly not worse than the P45 (according to Mark Dubovoy).

Phase One has always provided a means for fixing lens cast. Simply shoot a second shot through a translucent piece of plastic (provided with each back) and then use the LCC function on the Lens Correction tab. But with the IQ180 lens cast is a bigger issue, and therefore needs a more targeted solution. Phase One provides this in the latest Capture One 6.2.1 (and later) with a new function calledAnalyse Technical Wide Anglefound under the LCC section of the Lens Correction tab.

Note that some users are also seeing banding. This is also corrected with the proper use of Analyse Technical Wide Angleand is discussed further below. 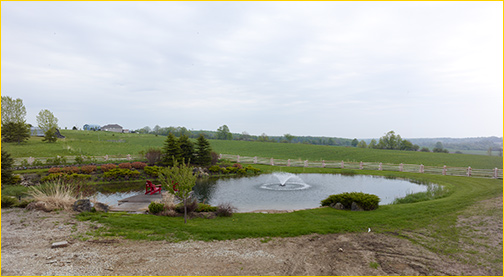 The above is based on a 14,145 X 7,765 three frame pano taken with the Schneider 43mm APO Digitar.
Center / Left 10mm / Right 10mm
The raw files are “As Shot” with no adjustments other than for having an LCC applied in C1 6.2.1.
Stitching was done in Photoshop CS5.5 using Photomerge / Reposition.
In the flattened 660MB file there is absolutely no banding, lens cast or vignetting visible.

How to Do It

Shooting an LCC file requires putting an opaque piece of plastic in front of the lens and taking an exposure. I have found that the best LCC files are produced when taken at between 2.5 and 3 stops more exposure than the proper exposure for the associated photograph. Though it’s not recommended, my experiments have shown that biasing the exposure of the LCC shot as far to the right as possible produces the best results. A little clipping isn’t even a problem, because its in the shadows that one sees the greatest casts.

In theory you should shoot an LCC frame with every exposure, even without any movements, because lens cast is definitely visible with the IQ180 and my Schneider 43mm, at least. It should also be at the focusing distance and aperture that the photograph was taken at. But, sometimes I’m lazy, and sometimes I forget to shoot an LCC, so my method is to shoot a set of standard LCC exposures at my most frequently used aperture (F/11) and focus distance (Infinity). I did seven – no movements, 5mm left, 10mm left, 15mm left, 5mm right, 10mm right and 15mm right.

I then run Analyse Technical Wide Angleon each of these files and create LCC files with names as follows…. 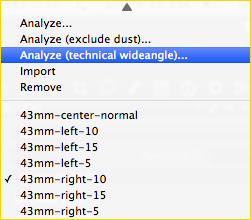 If I then happen to forget to shoot an LCC I aways have one of these to fall back on.

Be aware that every lens is different. What works for a 43mm Schneider may not for a different lens. Also, my approach of doing a set of standard LCC files for each lens is a shortcut. For this to work optimally you should shoot at LCC exposure at the exact aperture, focus distance and shift amount (if any) with every shot taken with a WA lens on a tech camera. This really isn’t much a problem, because it takes only seconds. The problem is that you have to remember to do so. And, if you’re shooting a pano with stitching in mind you need to do it for each shot.

Please note that I have found 15mm of shift with the Schneider 43mm lens to be a bit too much. Vignetting and lens cast just become too much with the IQ180 and so I’m going to be limiting myself to 10mm of shift.

Why Does The IQ180 Have Worse Lens Cast?

It’s natural to want to know why the IQ180’s lens cast is worse than that of the P65+, and I have asked the folks at Phase that question.

So far the answer isn’t clear enough for me to be able to explain it here. There are also reports of banding, though I haven’t seen it myself. Apparently the reason for this is that every eight pixel rows are connected in some way, and therefore need some form of balancing, which the new Analyse Technical Wide Angle LCC function does with WA lenses. When I have a more intelligible explanation I’ll post it here and announce the update.