Good morning. You know, every now and then I start to write one of my characteristic little rants about how annoying it is to wait for vaporware. We all have stories – well, most of us – I’m sure; with me lately it’s the Sigma 30mm that was announced way back in February and that Sigma told me would be out by the end of May. I’m not exactly hot tobuyone, but I’m really curious to hear buyers’ impressions, read user reviews, and see some pictures taken with it.

However, people in glass houses shouldn’t throw stones. I’m very annoyed at myself this week. I’ve been working, and I meanhard, on three big projects: getting my second book put together, getting the pre-orders of the first book filled, and getting the 8th issue ofThe 37th Frameout – and I haven’t been able to finish up any of the three. And of course all week I’ve been getting distracted looking at some of the hundreds of pictures and websites people have e-mailed me about since I, uh, asked for it last week. (Which is…whose fault?) I have neither given these pictures the attention they deservenorignored them completely as I ought to have done until I finish my more pressing work. Being an organizationally-challenged semi-employed single father may have gotten me too accustomed to a constant state of being forever and always behind.

But I’ve been putting in ten- and eleven-hour days on the new book, a massive compendium of about half of everything I’ve ever written about cameras and lenses, and boy is it spiffy-looking. I’m laying it out in Apple’s new Pages program, which I’m learning as I go along. So far I’ve only had one kernal panic (my kernal, not the computer’s) when, without realizing it, I accidently dropped a whole picture file into the header , where it disappeared completely. That really warped things out of shape for a while. But I finally figured it with the help of some of the denizens of Apple’s Pages support forum. Not being a professional graphic designer, I’m compensating by applying the KISS principle assiduously. Here’s a screen shot of one spread. Take a look: 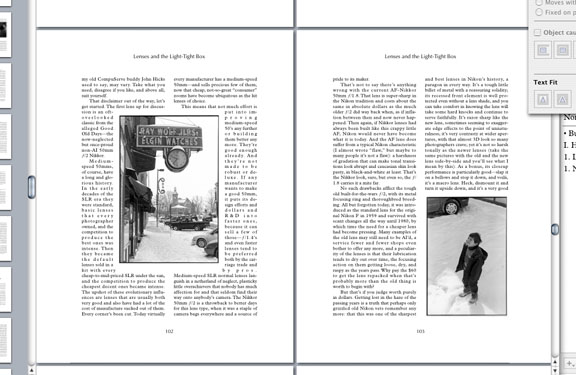 (Yes, I know there’s a widow showing.) The book is workbook-sized (8.5×11"), as you can see double-column, and so far has more than 30 illustrations. It needs more illustrations, but I’m trying not to make it too long so it won’t have to be too expensive.

And wait till you see the one after that! It’ll be a beauty. Can you tell I’m having fun with this?

…I guess not quite that long, because in the early days of photography cameras had to go on tripods, and didn’t need straps. Still, it took well over 100 years, and the arrival on the planet of a certain Al Stegmeyer, before humanity was able to perfect the humble camera strap. This, please note, is longer than the time it took to get from Kitty Hawk to the moon.

Al is the brains – well, okay, more accurately the "dogged perseverance" – behindUPSTRAP, which Sean Reid extolled a few weeks ago on the Luminous Landscape. Now, I haven’t tried every strap ever made. It just feels that way. Well, maybe I have. No, no, I’m sure there are some out there that I’ve never had on my shoulder. Pretty sure. The point is, how tough do you think it would be to make a strap that reallyworks? Well, it’s never happened before. Now it has. The Upstrap is it.

After years of lugging obscene amounts of camera gear around Washington, D.C., most of it usually strung around my neck, my neck just can’t take weight any more. (I know, you young guys are out there thinking, "huh, that’ll never happen to me." I know because it seems like about two months ago that I was young guy thinking, "huh, that’ll never happen to me.") I mean, it really can’t takeanyweight. My humble-but-lovely improved imitation Leica (below) is too heavy for my neck – I can last for about twenty minutes with nothing more than that before I start experiencing pain. 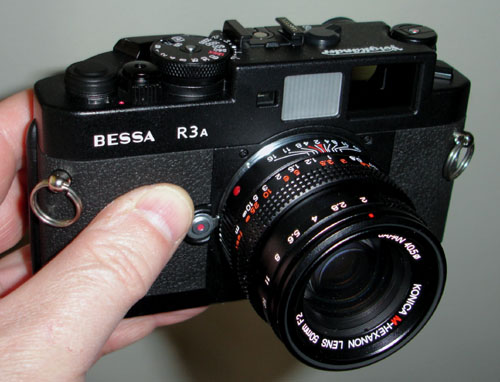 Ye Olde Technology, a.k.a. my millstone.

Ergo, a shoulder strap is mandatory. And even though I have fairly broad and fairly square shoulders (I go 6′ 2" and about 240 lbs.– that’s 17 stone for you Brits, and 188cm and 109kg in the sane nations of the world), straps all have one single thing in common: they slip off.

The Upstrap doesn’t. I’m not kidding. It really doesn’t. I don’t know how or why, but you can walk around for hours and the thing won’t move. You can reach down to pick something off the floorwith the arm your camera is onand it won’t fall off. This sounds absurd, I know. I had to walk around the house doing it over and over again before I believed it myself.

For those of us who either have to or want to carry cameras on straps hanging from something other than our necks, this is an invention on the order of, I don’t know, fuel injection, or the box spring. Modest, but at the same time crucial.

I’m reminded that everyone who’s really passionate about any particular subject knows a whole lot of things that they hardly know they know. A lot of us photo-nerds have accumulated drifts of information in our heads, lots of it in the form of tips. For instance, do you know what some museums use for wiping dust off the surface of valuable fiber-based prints? Makeup application pads (the unscented, non-powdered kind) available at the makeup counters in drugstores and department stores. (That’s all I was there for. Honest, I don’t look good in blush.) Did you know that if you cut the bottom off a Kodak film container and slit it up the side part way, you can jam it down into an Ilford film container and make a nifty film cannister for 120 and 220 films? Wow, now that’s got to be information that’s losing currency by theday. I probably have as many semi-useless tips in my brain as I have semi-useless photo odds’n’ends in my closet. You know, the usual collection of lens caps, filters, body caps – and straps.

It’s interesting watching the same thing happen with digital, except it’s happening communally. How to unclog print heads, add curves to Elements, which serial numbers of the 84-3drzl digicam are afflicted with the dreaded ________ bug. (Had to disguise that last one.) Information is shooting back and forth all across the world, as photographers collectively, and happily, amass vital tidbits of information that will, with time, settle down into a permanent state of U—>0, where U = uselessness.

I know, I know, I’m rambling. So, only one more thing. A tip for you. This is something you really need to check out if you’re a person who cares about the visual and visual phenomena, which I assume you are. It’s a site put together by a guy namedMichael Bach. But you’ve got to promise me not to go there unless you’ve got a lot of time to spare. Okay? I mean it. Don’t miss it, but really, you should NOT click on this link if you’ve got work to do.

And you’re not allowed to ask me how I know.