For years I’ve admired photographs with lightning in them. Striking is the word that came to mind most often. Figuratively and literally. For some reason, though I never really analyzed it, I always dismissed them as somethingother photographersdid. Great images, but not for me. Mostly what I saw was the lightning alone. Usually that’s all the photograph was. A lot of such shots featured what most certainly were multiple exposures on a one frame of several lightning bolts. Amazing! but still not for me. A great series of lightning over skyscrapers got me to thinking about what was missing.

I’m a landscape photographer. I shoot landscape almost exclusively and I shoot it a lot. I’m not much interested in other forms of photography, and although I’ve done them, my discipline is landscapes. I’d be out there experiencing these places without a camera if needs be. It’s the magic of nature that I try and capture on film.

I learned on a migratory bird shoot that the images that pleased me best were the ones that had the wildlife included in my landscapes. I’d set up a landscape image, or what I called "a set", and wait for the birds to land or fly thorough them. The shots of wildlife without habitat were less interesting to me. It was a practical lesson in fundamentals for me. Simply put, I found "You can take the animal out of the landscape but you can’t take the landscape out of the animalphotograph". As far as I’m concerned, it’s as basic as nature itself. You must have habitat or you haven’t clearly conveyed the story of the species.

This realization brought me to the understanding that I’d like to include lightning in my landscape images, not landscape images to my lightning. You could say "a light went on". But isn’t there a big "but" here? Most of the lightning I’ve seen in photographs were done at night. How else do you keep a shutter open that long? Stacking every ND filter I have in the middle of a very dark storm might get it done. It might get me killed also. So how might I approach this situation? How do I set up a landscape image that would stand alone and then have a bolt of lightning hit just as I open the shutter? I recently found my answer.

A company in Colorado calledStepping Stone Products, LLCmake a product called, aptly enough,The Lightning Trigger. This device sits on your camera’s hot shoe and is connected to your SLR (which has to have an electronic shutter) by a specially fitted cable (they will do it for you using your own release cable, or sell you one). It’s powered by a 9V alkaline battery. It’s small and lightweight and comes in a mini Lowepro bag. Length/Width/Height – 4.95" /2.75" / 1.38". The weight is 5.0 oz. It’s size permits you to have it with you at all times. That’s important because lightning usually happens when it’s unexpected. I live in Northern Arizona, a perfect place for the best kind of lightning to photograph‚ isolated thunderstorms. We have monsoon season here. Most days start with clear skies and in the afternoon we sometimes have tremendous downpours, followed by bright skies again. You just never know here. If I didn’t haveThe Lightning Triggerin my kit at all times I would not have the photograph presented here. The storm came from nowhere. 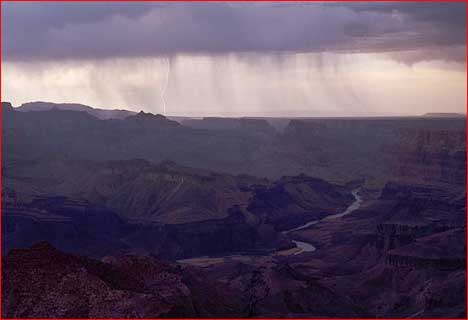 I can tell you that Stepping Stone’s website, and the instruction guide that comes withThe Lightning Triggeris firstly dedicated to lightning introduction, education and safety issues. Rightly so! Lightning is dangerous! You can get hurt! The disclaimer states that lightning is the # 2 storm killer in the U.S., killing more than hurricanes or tornadoes. Only floods kill more. Basically, it warns that common sense is needed and frequently ignored! Many websites where lightning information can be found along with a simple, do/don’t and myth/truth text are presented. I read them all and think about them before I set up. Like you, I’d like to live through the shoot and see the prints! 🙂

Here is the fun part, the trigger works! Well, it works a lot. Sometimes well. Here’s why: Photography with theLightning Triggeris possible because a lightning flash is not a singular event. A flash is comprised of multiple strokes occurring over as many as several hundred milliseconds. In other words, you get second chance. It also depends on your camera’s lag time. They are all a little different but needless to say, the quicker the better and the closer your camera to its company’s flagship, the less the lag time.

Why does it work a lot? Here is whatStepping Stonehas to say about shooting conditions: "A single isolated thunderstorm with a high ground flash ratio is the easiest to photograph since all of the lightning activity can be located within the field of view. You should position yourself in a safe location 6 to 7 miles from the storm so that it will pass across the field of view. This will allow the best opportunity to capture the lightning flashes."

The reality of this is that it will respond to flashes as much as 20 miles away and can sense embedded storms that have bolts usually outside the field of view. With automatic film advance you will shoot bricks of film! Or, actually the trigger will. If this becomes a problem, a solution might be to shoot print film. It’s cheaper to buy and just have it processed only, not printed. I personally found that if I had a good composition to begin with, it was like shooting in camera dupes. I had many frames without strikes, and a few with. Since you will most likely be using a mode that uses "one shot" or something like it, you get a fresh meter reading each frame. This, I found was almost like bracketing since the light was changing so fast. Either way, bring a lot of film and count on using it!

I’ve never done anything like this in the field before. The storm this day on the South rim of the Grand Canyon seemed to develop slowly. It became apparent to me about an hour into my afternoon shoot that I might have use forThe Lightning Trigger. A couple of things made the next hour possible. I carry two tripods with me and I have two camera bodies that I am familiar with and interchange them constantly. I needed both. As the passing storm took shape I felt like a general trying to hold two fronts at the same time. I had a great isolated storm in front of me and bright light and fast moving rays to the west. It was getting exciting fast!

I placed one body on a tripod withThe Lightning Triggermounted to its hot shoe, set it to one shot, 1/8sec (between 1/4 and 1/8 is recommended to capture a bolt) and focused manually (you don’t want to slow it down trying to auto focus). Of course the aperture is going to change with every fresh meter reading so you must be careful about the focus point. Certain concessions must be made or chances taken when deciding on composition. If I used too narrow a field of view (long telephoto) I may not capture a bolt. Too wide and my reason for the photograph may be missing altogether. I choose the wider side and then walked away. Next was to pick up my Canon 100-400IS and mount it to the other tripod. With the IS I had enough light to hand hold but I mounted it so I could attend to each setup at will, hands free. As the storm came closer and completely covered my position I shut off the trigger when I was sure all it might capture was a bolt because nothing else was visible. I kept shooting to the west.

Even though I knew the trigger was controlling the shutter release, I could not help but glance over at it. It was like someone else was shooting! Sometimes three or more frames in a burst! At things I didn’t see! Sometimes at bolts that I couldn’t help but see!! I was talking to it now ………… WOW!! & OH!!! …….. I said out loud. Did you see that? I said to my Canon 1V even though I knew it did because it had just fired a frame at it! 🙂 This was as fun and exciting as anything I’d ever done photographically.

When the film hit the light table I was completely surprised in ways that I hadn’t thought. First and foremost, the bolts that I thought were ringers, the couldn’t miss shots ……………………… it missed! The ones that I didn’t see that it fired at (and there were a bunch) the film didn’t see either. I was hoping for ET on his bike 🙂 Out of three rolls of film I had seven strikes that it did see.

If you work digitally, you might not want to stop with a single image. I found a lot of frames from the same set up will have bolts in different places. Sometimes all of them are interesting enough to work with. One of the variations I’ve tried is to composite several bolts in the same image. After all, if it’s permissible to open the shutter for multiple bolts then why not place multiple images over one another to achieve the same effect? I found trying to recreate the excitement of the shoot almost as much fun as the shoot itself

I think this one is a no brainer! This is a great tool. It works enough to carry it at all times. It gives you another weapon in your arsenal. It’s a way to do something that you can’t do without it. If you photograph in an area where you get lightning often, then it’s a must. Even if you don’t, your first frame with a lightning bolt will convince you that you waited far too long to haveThe Lightning Trigger. Most importantly, like all my photography, it’s fun! ……….Isn’t that why we do what we do?

By Frank H. Phillips — Digital Insect Photographer Introduction: What is the Canon MP-E 65mm Macro Lens? This is the most advanced macro lens in