Two new printers have been introduced, theDesignjet Z2100and theDesignjet Z3100. The Z2100 is an 8 pigment ink printer, and the Z3100 is a 12 pigment ink printer. Each will be available in one of two size; 24" and 44". Regrettably this strange naming convention will likely be a source of confusion, with models with the same number being available in two quite different sizes. But, that’s the way HP wants to market them.

In any event – the Z2100 becomes available immediately upon announcement (in both sizes), while the 12 ink Z3100 will start to ship some time around year-end. Given that the B9180 was announced in the spring of 2006 and didn’t ship till the fall, we’ll see how this plays out. Prices of both machines have been said by HP to be competitive with Epson and Canon models aimed at the same market segments, though likely with a somewhat higher price due, as will be seen below, to some of the printer’s unique capabilities and features.

Products rarely exist in a vacuum. They are brought to market because there is either a perceived market or competitive opportunity. In the case of pigment printers, a category invented by Epson some six years ago, both Canon and HP have decided not to allow a single company to dominate. Canon made its first foray with the 12 ink 17" iPF5000, and HP with the 8 ink B9180, but now both have also laid down the gauntlet with larger format models as well.

Given the performance of both Canon and HP’s initial offerings, and assuming that both companies can deliver not only when they say they will, but with reliability, documentation and support at a competitive level, it would appear that Epson’s days of dominance in photographic inkjet printing are over. (Not to mention the graphic arts segment as well – major users of large format printers).

The HP Z2100 and Z3100 series both use HP’s newViverapigment inks. Early Wilhelm test results are that longevity with suitable substrates is in the 200 year range, as long if not longer than with inks from the other two companies.

Three things will jump out from this latter list. There is no cyan, there is an additional gray, and the gloss enhancer.

According to HP the addition of red, blue and green inks allows them to do away with cyan. The additional gray will allow for better B&W printing, and the gloss enhancer (this far seen only on Epson consumer printers) will apparently totally eliminate gloss differential and bronzing on glossy papers.

In what I believe is an industry first, HP has built a profiling spectrophotometer right into all of their Z series printers. In combination with their provided software this allows these printers to create custom profiles automatically for any paper. Yes, automatically. Yes, any paper. The embedded spectrophotometer uses Xrite technology. Reportedly the process of creating a new paper profile involves just three clicks, and a wait of about 20 minutes while the printer performs the entire process automatically.

There was no comment from HP when asked about a smaller desktop version, competitive to the Epson 4800 or Canon iPF 5000, that might incorporate 12 inks and the spectrophotometer. But, it would be hard to image HP not covering all of the market segments eventually. 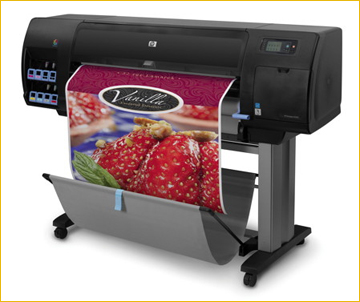 A Little History January 2016 will be remembered for a number of new camera releases and a major snowstorm in Eastern USA.  I can’t remember