One of the challenges of working in digital is managing the veritable explosion of files that will start to populate your hand disk. There are two aspects to this; file size and file quantity. With more than 100 Gigabytes of scanned files accumulated over the past few years I am more than familiar with the former problem. I havean articleon-line which describes my technique for handling the issue.

Shooting in digital though creates a new problem‚ managing the hundreds of files that even a brief shoot can generate. I used to be a photojournalist and would think nothing of shooting a dozen or more 36 exp rolls a day on assignment. These days, doing landscape, nature and wildlife work I don’t shoot quite that much, but some good days can see between 5 and 10 rolls.

With film, these are placed in sleeves (I don’t mount them as slides but treat them as negatives in strips) and then stored in binders. Storing 30 rolls from a week-long shoot doesn’t take all that much space. Only the frames worthy of being scanned, are, and the rest get filed for posterity and possibly later review. Only real junk is discarded. One never knows.

With digital though, 30 rolls is equivalent to about a 1,000 frames, which in RAW mode is3 Gigabytes. Ouch. While these can be offloaded to CD or tape, organizing them is still a huge issue. Be prepared for some serious storage requirements if you get a D30 or similar camera and do any volume of shooting.

While attaching the camera to the computer for transfers is an available option it doesn’t make much sense for me. I have a PC card reader on my laptop and a USB based reader for my desktop, so placing theMicrodriveorCFcard in one of these is a simpler procedure.

There are now a couple of ways of getting files intoPhotoShop. One is to use theTwaindriver in PhotoShop and the other to use Canon’s suppliedZoombrowser EX. Zoombrowser is probably the way that most people will work, so let’s look at it first 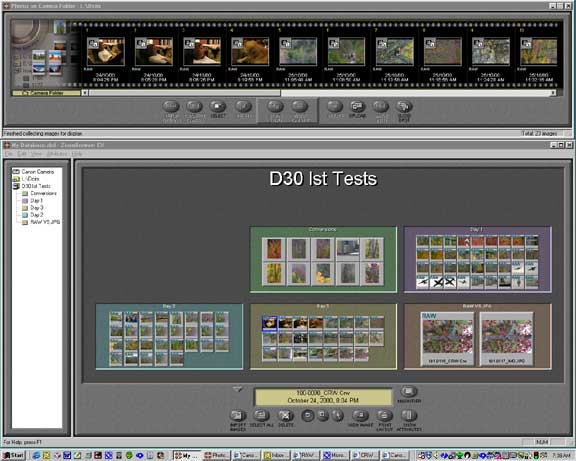 Zoombrowserhas several advantages. It can display the contents of a card (see top window) and you can download these individually or en-mass into subdirectories (seen in the lower window).  Once the card has been downloaded it can be reformatted and reused. Images can be freely moved around between subdirectories and organized in any way you wish. New groupings and sub-groupings can be created at any time.RAWfiles andJPGsare displayed identically. 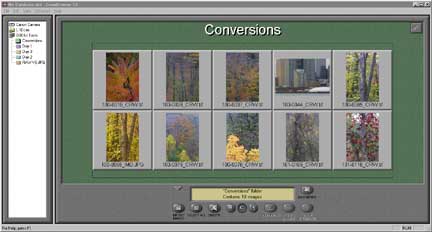 Any of the subdirectories can be zoomed in on (Zoombrowser – get it?) and isolated. These subdirectories can be further zoomed in on so that quite a recognizable thumbnail can be seen. Note though that while JPGs (or RAW files already converted to TIFFs) can be zoomed a great deal, unprocessed RAW files start to pixilate after a couple of magnifications. 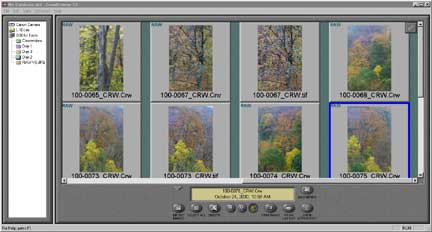 RAWfiles need to be decoded. This can be done in theTwaindriver or inZoombrowser. Depending on your PC’s processor it will take between 30 seconds and a minute per file. (Some folks have complained about this. Anyone used to laborious hours working in the darkroom will find this to not be an issue, and anyone used to scanning film will similarly find it quick and painless by comparison, particularly when done in batch mode).

As my use of the D30 expands I have found a preferable workflow to using Zoombrowser. It involves using the TWAIN driver. But before exploring how I use it I should discuss some first steps.

We all shoot far more than we print. With digital, where the incremental cost of each exposure iszero(rather than about 50 cents a frame for 35mm transparency film) the temptation is to shoot even more. Nothing wrong with that other than that someone (you!) has to look at them all and decide which images are worthwhile, and which aren’t.

Here’s how I approach the problem.

Firstly, I edit in-camera. I normally work with the D30’s LCD turned off and hardly ever review frames immediately after taking them. This not only saves battery, but also is less distracting while working. The time for editing isafterward, notduringa shoot. So, in the car or motel room or airplane I’ll do a first pass edit using the camera’s LCD. (In a motel room you can also use the TV if it has a monitor input).

At this point I discard the frames that are obviously of no interest or usefulness. If there’s any doubt whatsoever the file is retained, but this stage eliminates a large percentage of what was shot.

On returning to my desktop or laptop computer I copy the card to a subdirectory. I then run PhotoShop and use the TWAIN driver to examine the thumbnails on-screen. This gives me a second more thoughtful chance to review the files and eliminate any additional ones that are clearly lacking in value.

Of the remaining ones I then select about 10 frames at a time and import them into Photoshop in batch mode. This takes about 8-10 minutes during which time I take care of other tasks. Once these 10 frames are on screen I can judge them for content, interest, exposure, and sharpness at any magnification. The ones I want to work on are saved as .PSD files (without any further work done on them at this point) and the ones that are not of interest are noted and I then go back to the TWAIN driver and delete them. I continue this process until I’ve worked my way through the contents of the card.

I now have two subdirectories on my hard disk. One containing RAW files and another PhotoShop .PSD files of the same images, ready for me to work on.

The RAW files that I saved I regard as the equivalent of negatives. These are like film; essentially what the camera saw. Just as I would file my negs or transparencies in a safe place, I do the same with these files. They are placed into a subdirectory and when there is about 650 megabytes worth of them (about 200 images) I burn them onto a CD. At about $1 for a blank CD the cost of storage works out to .0005 cents a frame. Cheap insurance.

If you own a D30 and have not yet used the provided cable to review your pictures on a TV monitor, you’re in for quite a surprise. The quality is superb. While thumbnails reviewed on the camera’s LCD or in ZoomBrowser are limited in their usability because of their small size and reduced resolution, image output to a monitor is remarkably sharp and clear. As far as I’m concerned this istheway to initially review your work, saving a huge amount of time, particularly if you work exclusively in RAW mode for maximum image quality, as I do.

If you travel with a notebook computer theUSB VideoBusfromBelkinallows you to view camera output at full VGA resolution on your computers screen.