The word "mode" has meanings in a great variety of disciplines, including music, philosophy, and mathematics. Although a few of the meanings are technical, generally the word is agreeably broad and vague. As an art-critical term, it’s often used in a rather fuzzy way to mean something like "I hope it’s obvious that I’m saying something serious here." It is also occasionally employed to convey actual meaning; it refers to a manner of presentation that carries along with it a range of cultural assumptions.

For instance, when you turn on the radio and you hear a man with a vaguely southern accent recorded with reverb, you know instantly that you’re listening to a religious broadcast. It doesn’t matter whether you hear him say anything religious or not; you know what’s happening. Likewise, seasoned television viewers can turn the dial to a television show they’ve never seen before showing an actor who is a total stranger to them, and they’ll know within seconds – if not a split-second – whether the show is a sitcom or a drama. You can tell a British import on PBS with the sound off, from the look of the video. In a movie, when a moving camera tracks close behind someone who’s doing a wee bit of exploring (in dark woods or an old house especially), you know instinctively that something is about to pounce on him or attack him from behind or off to the side.

Many of the common modes of photography are intended to convey what might be called "art-intention." Tones and local-contrast vividness can signify that you’re in the realm of intended transcendence, or the photograph-as-something-more-than-photograph. A common mode of art photography these days is what I call (to myself, that is) faux-pictorialism – they’re usually medium format black-and-white pictures that are dark and murky with lots of blur. It’s a signal that you’re supposed to read them as enigmatic, symbolic, implicative.

Modes can subtly tell you how you are supposed to feel about what’s being presented. Nature photographs often assume a whole raft of Romantic-era modes of the perception of nature; they say, "nature is beautiful, orderly, and spiritual, and you should feel exalted and nourished as you look at this." Your attention is not supposed to be diverted to the wayward detail or to individualized features. And you’re not allowed to wonder if the photographer was being eaten alive by mosquitoes.

People who are unfamiliar with the idea of modes don’t know how to look for unexpected instances of them. For instance, the verbal delivery of radio "shock jock" Howard Stern uses the same speech rhythms as preaching, albeit in a sardonic rather than a hectoring or stentorian tone. The photographer Joel-Peter Witkin shows tableaux of morbid and deviant scenes that are essentially pornographic, but he softens them by using the visual clues of daguerreotypes, even down to carefully reproducing (with toilet paper carefully placed around the edges of his easel) the edges of glass plates where the emulsion has chipped off. Robert Mapplethorpe, as I’ve argued elsewhere, was a (rather dull) classicist in all things except subject matter…sometimes.

Artists sometimes play with modes. One notorious example was when Sherri Levine made exact, same-size copy photographs of pictures by Walker Evans, and exhibited and sold them as her own. Allegedly, this was supposed to excite discussion and conflict (it did) by confusing modes: those of "artistic influence" and plagiarism. (I vote "plagiarism," but then I’m just an "outsider" critic anyway, unregenerately uncool.) 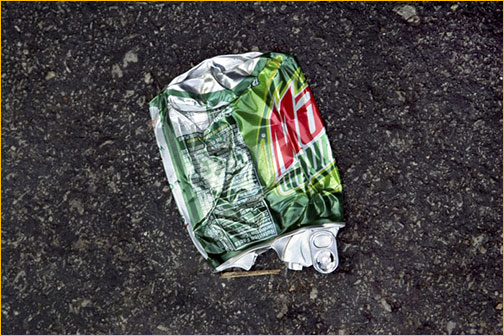 And of course, many strategies of "playing" with common modes are so widespread, and so widely recognized, that they’ve become modes of their own. For example: the notion of placing centrally a bit of detritus or junk and describing it lovingly and exactly as if it were something beautiful, in the mode of advertising product photography.

The reason it works is that sometimes, the objects actuallyarebeautiful, in one way or another.

TWO NEW FREE DOWNLOADS this week atwww.lulu.com/bearpaw"Flash Photography with the Konica-Minolta 7D" by Peter Gregg, and "Megapixels and Medium Format."

Journey to the Subway