People may imagine great photographs are composed in a flash of inspiration, arriving in the world fully formed. While that can happen, most of the time we fumble toward a great shot, refining the composition with each exposure. This was certainly the case with my image,The Night Fishermen. 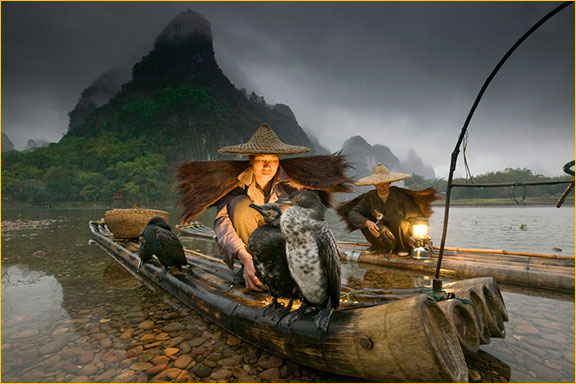 For centuries fishermen on the Li River of Southern China have partnered with cormorants to catch fish. Each fisherman has a complement of half a dozen or so trained birds. The light of a lantern attracts the fish, and the cormorants return to the boat, fish in beak. They can’t swallow them because the fisherman fix a band around their necks, but they eventually get their share.

In the first image, I grabbed this shot of two fishermen approaching the shore. While the fishermen are working, they see enough tourists to know that a few minutes posing can yield as much money as a night’s work. After a few moments exchanging hand signals we came to an agreement, and this is the first pose. 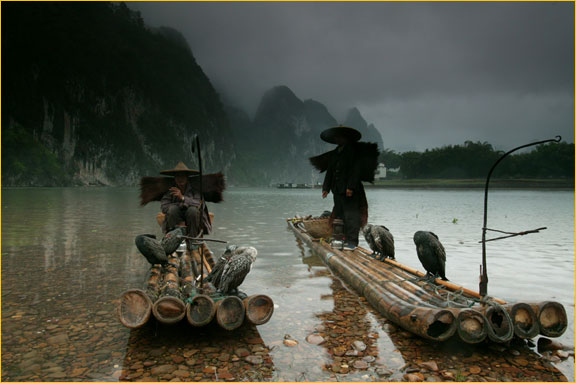 Nothing works here. A bright background throws the men into silhouette, some of the birds sit with their heads buried under their wings, and the composition is deadly static. I decided I to try a second light to tame the contrast and provide a better sense of separation for the fishermen. 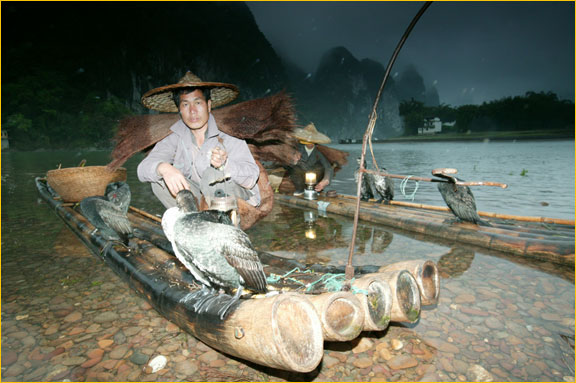 I tried a simple flash, but the strobe overpowered the background. Even with gels to match color temperature and knocking down the power by a stop or so, I could tell I wouldn’t get the result I wanted. If I could choreograph everything, perhaps, but too much was out of my control. I needed better conditions, not better technique. 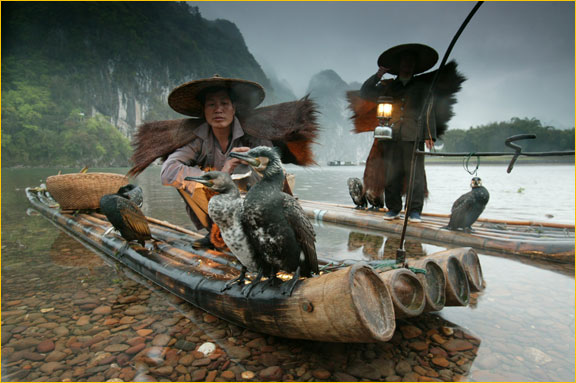 Pic 4 Better, but Not Acceptable

By the time I was ready for the next shot, the darkening evening sky balanced the light somewhat. A 16mm focal length endowed the image with the depth I wanted and, combined with an f16 aperture, ideal depth of field. Waning light necessitated a one to two second exposure. Although blurred moving birds ruined most of the shots, they blocked direct light from the lanterns. I was making progress. 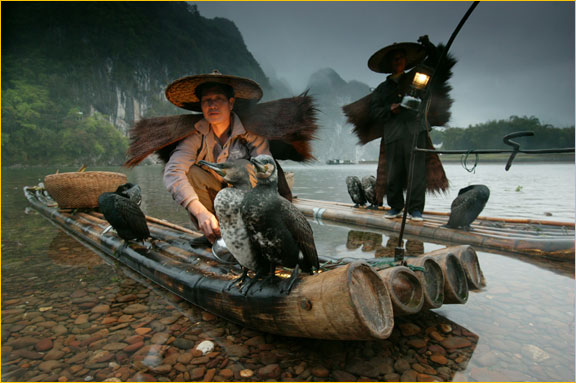 Pic 5 Light still out of balance

In the next composition, I was chirping to get the cormorant’s attention as if I was photographing a phalanx of babies. I tried an exposure at about 25mm. In these shots, the fishermen are looking at the camera, and some of the birds had returned to sleep, resembling feathered boulders. The man in the back was still too silhouetted. There were a lot of variables that had to come together at exactly the same time. I would need some luck. 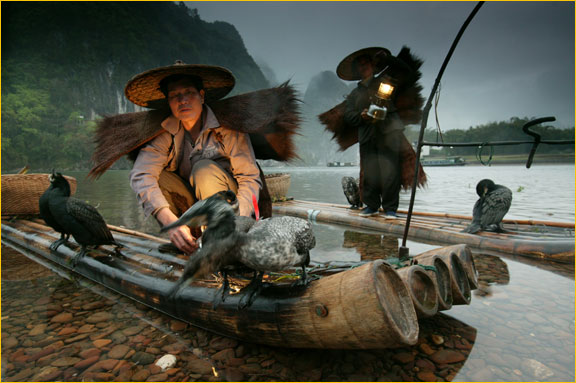 The light was getting good here, but the composition was still too tight. I needed space for the image to breathe. 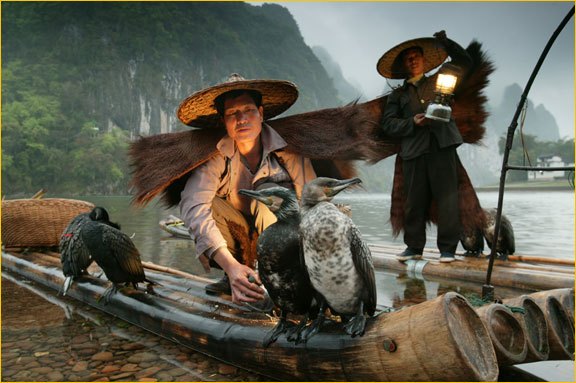 The penultimate image is a vertical. Everything is working here. The light was coming alive. I still preferred the horizontal composition, but I often sell images for magazine covers or ads. Never turn your back on a sale, I always say. 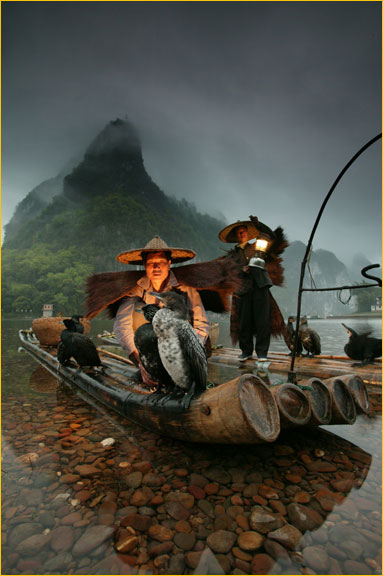 With the final shot, it all came together. The cormorants stood stock still, heads up and blocking the lantern light like champions. The fishermen, now bored out of their skulls, were occupied with their tasks, transforming a posed image into a genuine candid shot. The light was in perfect balance: background, foreground, and warm lantern fill. The fisherman received their tips, I had my shot, the cormorants swallowed some morsels, and everyone was happy.

Join Art Wolfe on a Travels to the Edge voyage to Antarctica in November, 2010.
To save $500, reserve space before June 1, 2009. Visit NEW atwww.artwolfe.com.

See all articles by Art Wolfe

American photographer, author and conservationist, best known for color images of wildlife, landscapes and native cultures. His photographs document scenes from every continent and hundreds of locations, and have been noted by environmental advocacy groups for their "stunning" visual impact.