I have returned to a state of pristine ignorance. Yet again, I know nothing about nothing.

I’ve always been acutely conscious of my lack of knowledge, and (ruefully) well aware of my limited ability to redress the problem. I study every day, but I read very slowly, write more slowly, and have a memory that’s full of holes. I have limited time for deep reflection, and sleep poorly. I’ve never read Gibbon, or Suetonius, or Shelby Foote. I suspect I would not do well as a contestant on "Jeopardy," even though I’m an ace from my armchair.

But for a while there, I knew a thing or two about photography. With a degree in it, several decades’ worth of experiences of many different aspects of it, a good visual memory, and thorough familiarity with a decent-sized library, I actually knew more about it than some people. I didn’t know everything; I didn’t know a fist-sized percentage of everything; but I could hold my own.

Well, all that’s shot to hell now. All I have to do is open Photoshop, and I’m an idiot again. Digital has returned me to a level of familiarity with photography that matches my knowledge of everything else. 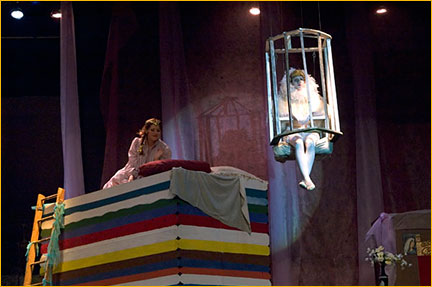 My talented niece Christy as the nightingale in "Once Upon A Mattress,"
doing a simply stunning job with the singing part. I really love the print.

For instance, only last night I produced the first really, really good digital print I’ve ever made. The darned thing is just absolutely gorgeous. It’s subtle, delicate, balanced, painterly. It’s as good or better than anything I was ever able to accomplish with film. Sure took me long enough.

But I digress. I was speaking of my ignorance, and I meant to bring up an example of one of the many things I don’t understand. It’s that everybody always seems to be talking about noise. Every time I log on to a forum somewhere, people are deeply concerned about it. Such-and-such a camera has noise. Noise at ISO 3200. Noisy sensor. Too much noise. I hear more noise about noise than I do about the national debt.

What in the world…? Noise has got to be the biggest non-problem in all of digital photography.

First of all, complaining about noise in pictures is like complaining that you can see brushstrokes in paintings at the museum. It’s just a hallmark of the technique; it’s not something to decry, it’s something toenjoy. Random museum visitor: "My God, all those obtrusive little dots! Who is this Georges Seurat character, anyhow?" 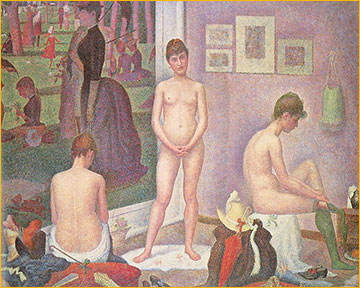 Consider this. It’s something that art historian Meyer Shapiro said about Seurat’s pointillism.

"Admirers of Seurat often regret his method, the little dots. Imagine, Renoir said, Veronese’sMarriage at Canadone in petit point. I cannot imagine it, but neither can I imagine Seurat’s pictures painted in broad or blended strokes. Like his choice of tones, Seurat’s technique is intensely personal. But the dots are not simply a technique; they are a tangible surface and the ground of important qualities, including his finesse. Too much has been written, and often incorrectly, about the scientific nature of the dots. The question whether they make a picture more or less luminous hardly matters. A painting can be luminous and artistically dull, or low-keyed in color and radiant to the mind. Besides, how to paint brightly is no secret requiring a special knowledge of science. Like Van Gogh, Seurat could have used strong colors in big areas for a brighter effect. But without his peculiar means we would not have the marvelous delicacy of tone, the uncountable variations within a narrow range, the vibrancy and soft luster, which make his canvases, and especially his landscapes, a joy to contemplate."

Secondly, people who enjoy discussing the noise of digital cameras, especially of digital SLRs, at great length are certainly not bringing to the table much history of experience with film. A mere 20 years ago, art photographers who used color print film were virtually wedded to Kodak VPS 100, because there was no 400-speed film with manageable grain and decent saturation, and there were precious few 100-speed color films with adequately low contrast. When 400-speed film with petit-point grain came along, it was a brave new world.

And finally, all these people happily debating about noisead infinitum, have they heard of Neat Image and Noise Ninja? I use Neat Image Pro myself. Diddling about with digital, Arthur C. Clarke’s famous quote is oft brought to mind: "Any sufficiently advanced technology is indistinguishable from magic." (I think that’s it. I told you I had a memory full of holes.) Neat Image Pro is, plainly put, magic. Remember that fantastic print I told you about? I’d have to check to make sure, but it was shot at either 800 or 1600. I think 1600. Neat Image made a mockery of any concern about noise. 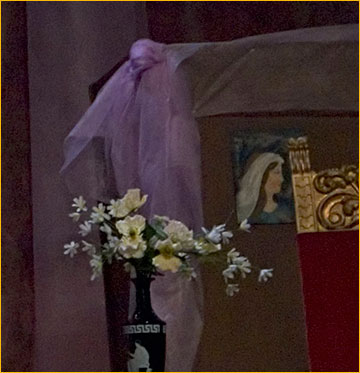 The lovely little frieze in the corner of the picture. Neat Image Pro just plain rocks.

Neat Image even allows me to leave a little noise intact, if I so choose. I usually do. I like noise; it looks digital, and digital is a look I’m learning to like. (Slowly, as usual, but then, that’s the cross I have to bear.)

Mike Johnston will be away during August; his next SMP column will appear on September 4th.