This test of theOlympus C-8080camera and lens was conducted usingDxO Analyzer. If you are not familiar with this optical testing system please readthis tutorial. Without being familiar with how the tests are conducted, and how to read them, there’s not much point in proceeding.

As you can see from theDxO Analyzer Tutorialthere are a large number of charts and text graphs produced for each of the four tests —Distortion & Chromatic Aberration,Vignetting,NoiseandBlur. A more comprehensive test would have to be done at all available apertures, all available ISO speeds, and at a large cross-section of focal lengths (in the case of zoom lenses). This would not only take an inordinately large amount of time to conduct, but would take up far to much space here and likely not be of much interest.

Consequently in this and other tests usingDxO AnalyzerI am publishing just one complete set of charts — those done at f/5.6, which is typically an optimum aperture for most lenses, and in the case of cameras, at the lowest ISO setting. In the case of zoom lenses this test is done at a mid-position in the lens’ focal length range. I also post data for other F stops, ISO ratings and in the case of zooms a selection of focal length, including the widest and longest. In my comments to each section I also draw attention to extremes of performance, such as maximum vignetting, greatest and least noise, etc.

By Way of Comparison

At the time of preparation of this analysis (mid-March, 2004) the only other 8 Megapixel digicams to have been tested and reviewed withDxO Analyzerhave been theSony F828and theKonica Minolta DiMAGE A2. You may wish to open these pagesin separate windows so that they can be compared. If you are reading this at a point when other 8 MP cameras have also been reviewed, you can find links to themhere.

I would have preferred to set the lens to a slightly longer focal length for the bulk of these tests, but the electronic zoom is very coarse and imprecise, and doesn’t lend itself to repeatable settings. There also are no scales on the lens or in the viewfinder to judge more than vaguely where in the zoom range the lens is being set. 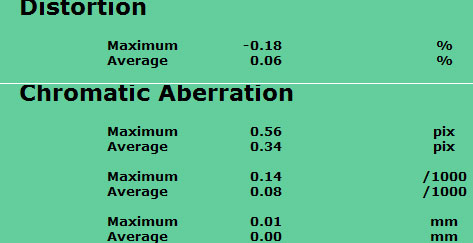 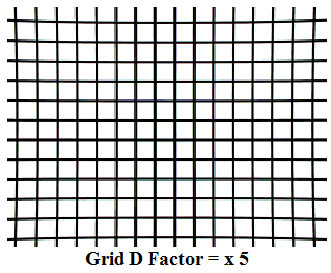 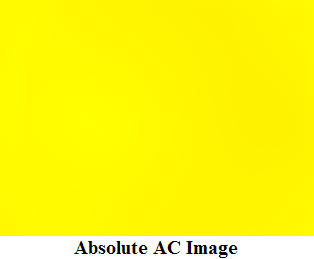 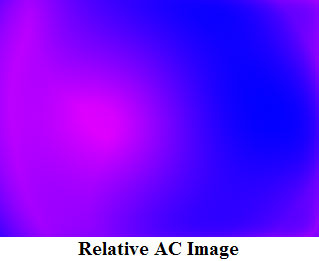 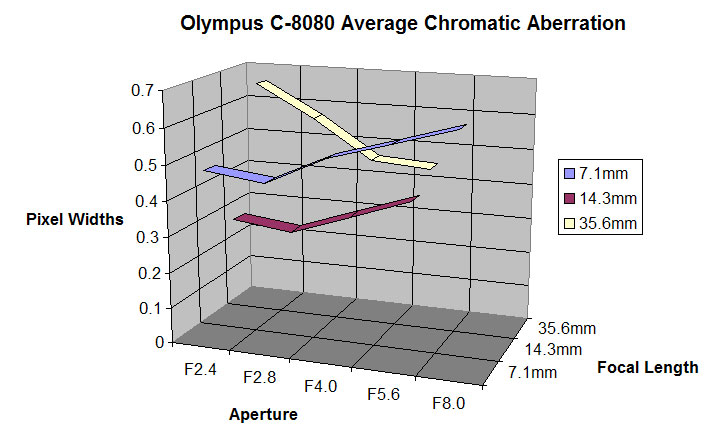 Distortion is low at this focal length, at -0.18%, showing slight pincushion distortion. It falls about mid-way between theSony F828and theMinolta A2.

Maximum chromatic aberration is also relatively low at .56 pixels. This is almost exactly the same as the Sony F828 at a comparable mid-range focal length and both are lower than the Minolta. This results in just barely visible CA on the yellow Absolute chart. The CA at this aperture and focal length is concentrated in the left of the frame, as shown in the Relative chart above.

The table below shows how chromatic aberration varies with both focal length and aperture. CA with this camera is much-lower than with the Sony at wide angle focal lengths, a bit better at mid-range, and again significantly better at the long end. The matching CA table for the Sony F828 is foundhere. The Minolta again falls somewhere in between, but neither can touch the Olympus in this area. 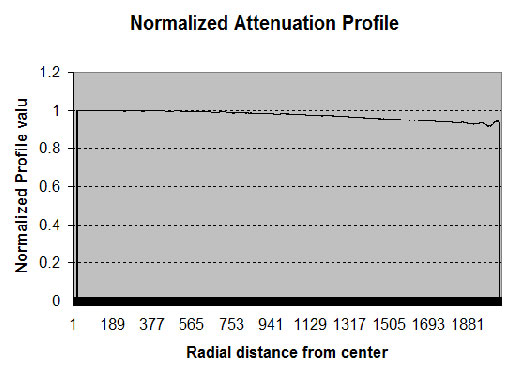 Vignetting at this focal length and aperture is very low, comparable to both the Sony F828 and the Minolta A2.. 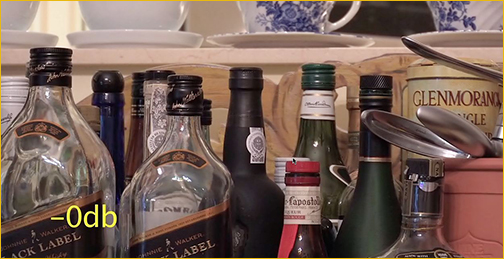 The signal to noise ratio on the luminance channel is 43 dB. This is a full 3 dB higher than the Sony F828 at comparable ISO and 4dB better than the Minolta. Keep in mind that a 3 dB difference represents what is a just noticable difference. As one would expect noise increases at higher ISOs, and like all digicams is quite poor at ISO400.

NB:The current pre-release version of DxO Analyzer (Feb, 2004) basis its S/N readings on a single average Gray Level. Since this is difficult to accurately match between test cameras it is not yet appropriate to compare S/N readings between camera systems. It also does not provide sufficient information about how a particular camera’s sensor responds to noise as the exposure value is varied. 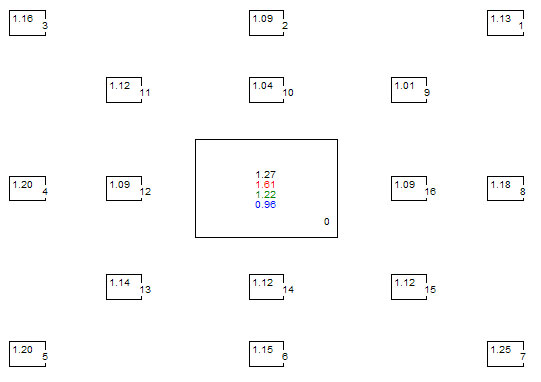 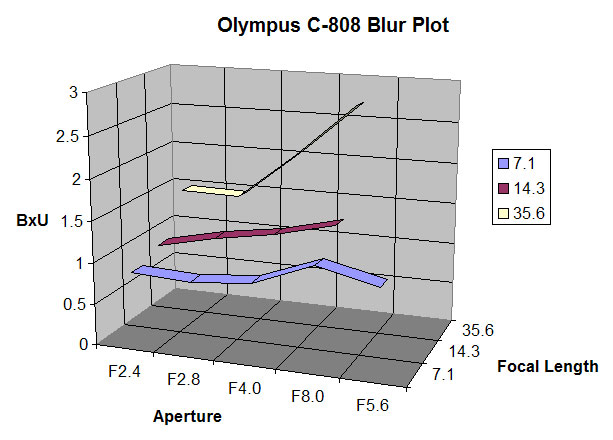 The C-8080 performs better than the Sony F828 in this measurement by about a half BxU, which is noticeable but not huge. The Minolta though trounces them both in this area.

The 3D Blur Plot tells an interesting story. As with both the Sony and the Minolta blur is more pronounced at the longer focal lengths, especially at smaller apertures where diffraction effects come into play. But at medium and wide focal lengths blur is quite low at all apertures, and performance measures well.

In virtually every measure the Olympus C-8080 measures better than the Sony F828, though in the case of the Minolta that camera wins handily when it comes to resolving power. It remains to be seen how it will compete with the Canon and Nikon offerings, but certainly of the three cameras tested thus far the Olympus measures very well.

Whether the concerns that I have expressed in mymain reviewabout the camera’s features (or their lack), and whether its functional and ergonomic failings will outweigh image quality performance in the hands of any individual photographer is something that each person will have to decide for themselves.