A Big Gun Shoot Out

I’m always interested in determining for myself how different lenses compare. I don’t shoot lens charts and count lines / millimeter, but I do find that shooting some real-world subjects can tell me a lot about how lenses perform and compare.

Among medium format camera makers Pentax undoubtedly has the broadest selection of long lenses for their 67 camera system. ThePentax 67 IIis the largest camera that one can take into the field that offers very long lenses, suitable for wildlife and highly compressed landscapes — two of my primary pursuits. So, when I purchased the400mm f/4 ED(IF)lens I was particularly interested how it would compare with two other long Pentax lenses with which I had experience.

These frames were all taken within a one hour period on a clear and cold, but slightly hazy February morning in Toronto. Immediately below is the scene photographed. This is at the 6X7cm format’s “normal” focal length of 100mm. (Anyone coming from the 35mm world should keep in kind that 6X7 lens focal lengths should be divided by 2 to derive their 35mm equivalents). 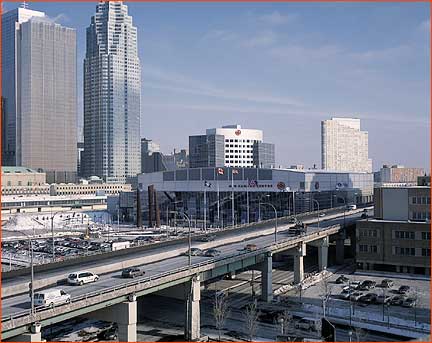 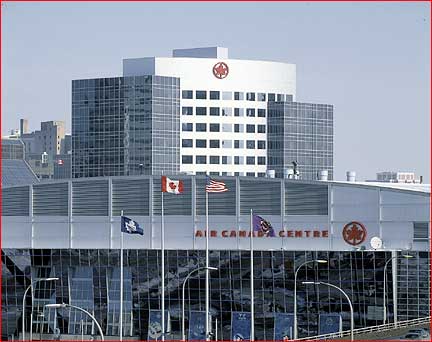 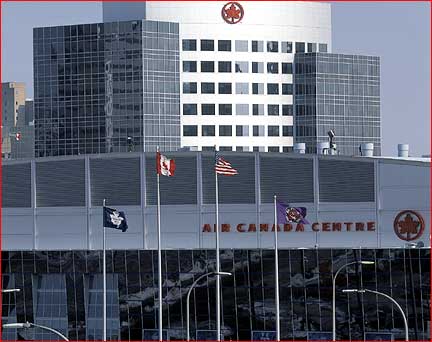 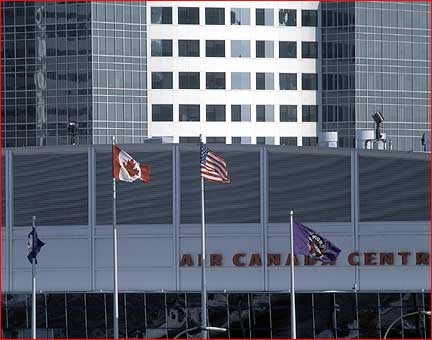 The three frames above will give you a basic idea of what the three lenses’ inherent coverage’s are like, and together with the 100mm frame above them will orient you to the test frames below. The subject is theAir Canada Center, which fans of professional basketball will recognize as the place where theToronto Raptorsplay. The flags were placed in center frame for convenience of framing, not nationalism.

The film used wasFuji Provia 100Fand frames from each lens and lens + extender combination was scanned with anImacon Flextight Photoscanner at 3200 PPI.

Test frames were shot at all apertures, from wide-open to minimum. The lenses were mounted on heavy tripods and extra bracing was used for the body. Mirror lock-up was used for all frames.

To save space on this page I am only reproducing center and edge portions shot at two apertures, f/4 and f/8. The examples shown in the tests below are at 100% (Actual Pixels) magnification. The center image is, obviously, the American flag, and the edge image is from the extreme upper right hand corner.

After only a short ownership period the 600mm f/4 lens disqualified itself for me because of excessive bulk and weight. But before I sold it I decided that it would be interesting to see how the new 400mm lens with the 1.4X extender would compare. This combo produces a560mm f/5.6, close enough for the test to be relevant. (Frames shot with the 1.4X extender are indicated at their actual aperture. Be aware that effectively the aperture is a stop slower).

Both lenses wide-open at f/4. 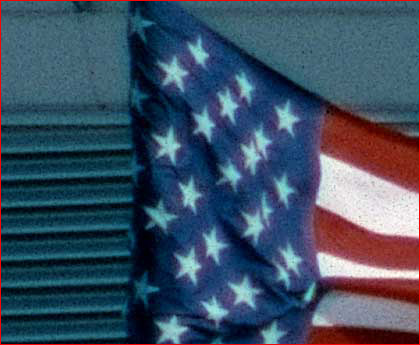 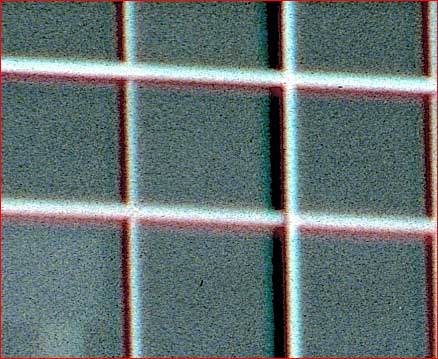 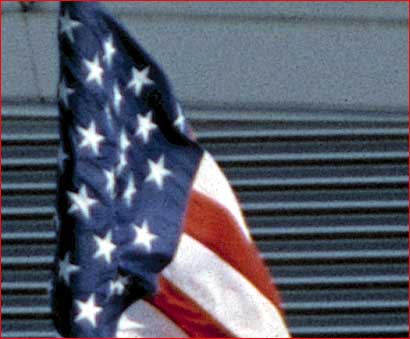 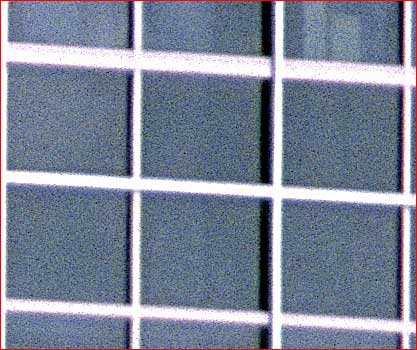 The first thing one notices is the higher contrast of the 400mm lens. The next thing that one notices on seeing the edge frame from the 600mm at f/4 is the very visible chromatic aberration. Because the lens does not utilize UD or LD glass it is lower priced than it otherwise might be, but high-end modern lenses simply don’t display these flaws any longer due to the use of advanced glass and manufacturing techniques. (This issue is explored in some detail in my600mm f/4 review.)

If you look at the gap line in the concrete that’s visible just to the upper left of the flag you can see that even wide open the 400mm + 1.4X extender is clearly shaper than the 600mm lens. It’s hard to compare the edge sharpness between the two frames because the 600mm frame is so affected by chromatic aberration, but there’s little doubt that the 400mm + 1.4X is sharper.

Both lenses stopped down to f/8. 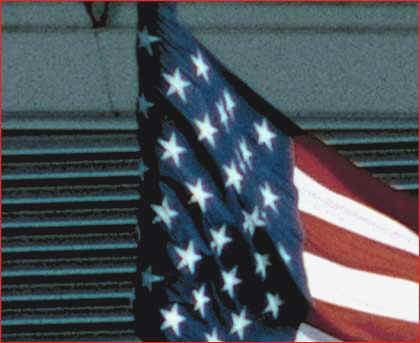 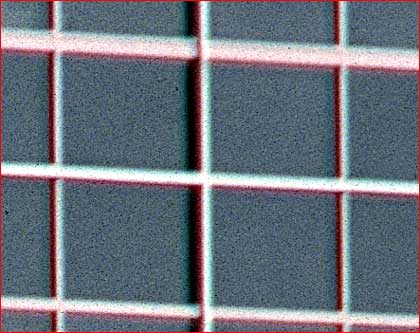 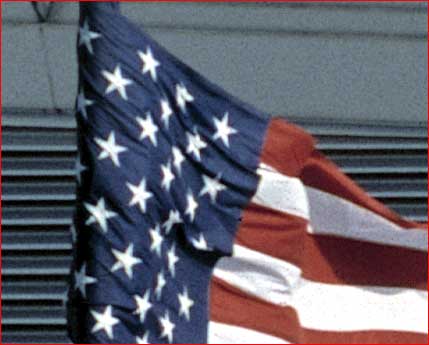 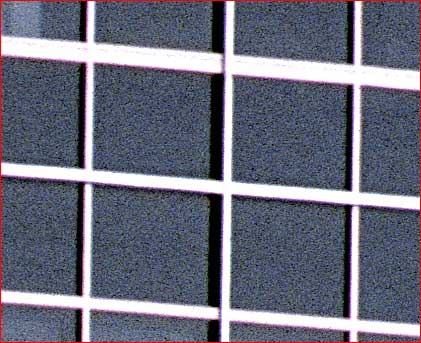 The 600mm lens improves in sharpness when stopped down two stops, and chromatic aberration is sharply reduced, though not eliminated. Surprisingly the 400mm + 1.4X only improves slightly by being stopped down. This is indicative of excellent performance to begin with. Nevertheless while they are roughly equivalent at center and the edges, the 400mm + 1.4X is sharper.

It’s interesting to note that the 400mm + 1.4X combination isn’t itself completely free from chromatic aberration, the lens is not truly apochromatic, but chromaticism is so low as to not be noticeable on any reasonably sized print. The 400 with the 1.4X is also inherently more contrasty than the 600mm.

When I originallytestedthe Pentax 600mm f/4 lens I was very impressed with its sharpness, though less than enamoured of its chromatic aberration.  That a lens plus a tele-teleconverter (the 400mm + 1.4X) can surpass this, especially wide open, is a testament to the quality of the 400mmandthe Pentax 1.4X converter.

The 400mm + 1.4x combination is significantly smaller and less massive than the 600mm, yet is as sharp and sharper while exhibiting much less chromatic aberration. This makes it the preferred solution, though it is significantly more expensive than the older design 600mm and has the loss of 1 stop of aperture. (In Feb, 2002HarrysProShophas the 400mm + 1.4X combination for U.S. $5775, while the 600mm is $4,000).

Up until now my longest lens for the Pentax has been the new 300mm f/4 ED(IF), a superb lens. Using the 1.4X extender it becomes a420mm f/5.6,and I was curious to see howthiscombination would compare.

Both lenses wide open at f/4. 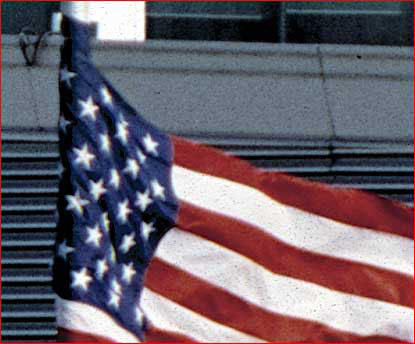 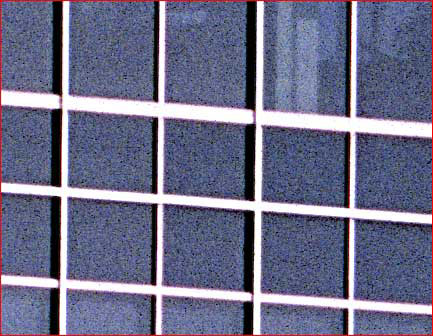 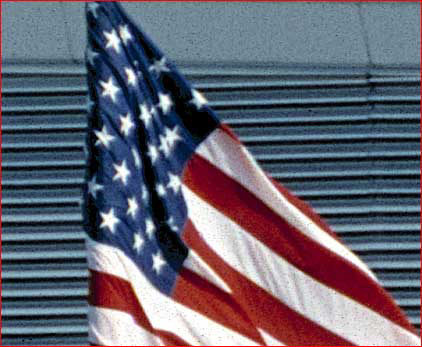 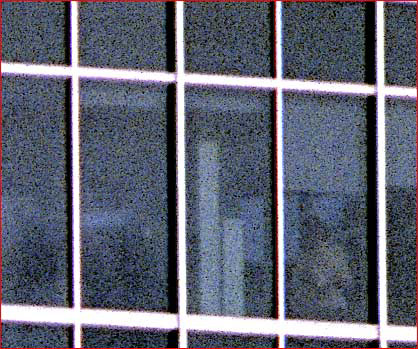 Wide-open performance of the 400mm and the 300mm + 1.4X is remarkably similar. Other than the fact that it’s a stop slower, I’d say that the 300 combined with 1.4X extender offers tremendous value.

Both lenses stopped down to f/8. 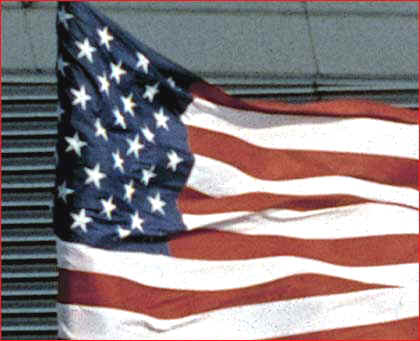 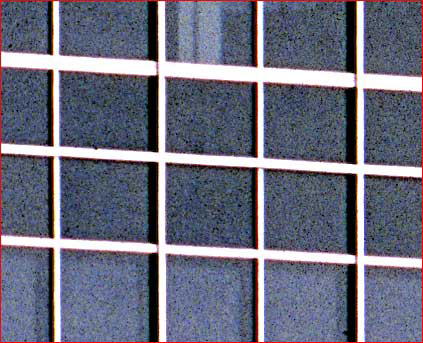 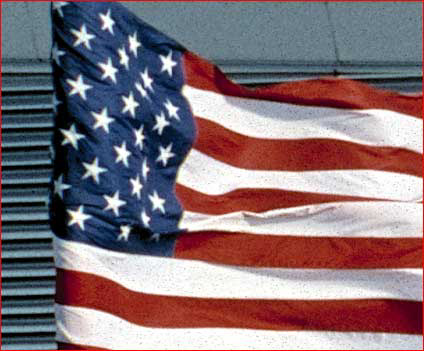 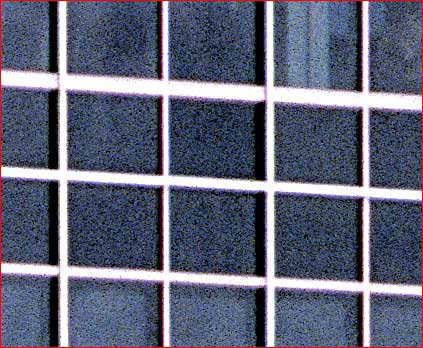 Again, it’s hard to tell these two lens systems apart though the 400mm has a definite edge. By using the 300mm f/4 ED(IF) lens with the 1.4X extender one has a relatively small and light weight 400mm alternative. Of course one loses a stop of speed. The only other compromise is that reach is limited, because with a similar 1 stop sacrifice the 400mm becomes almost a 600mm. As always, there’s no free lunch.

These are three fascinating lenses, each with different character, and characteristics. There wasn’t room in my photographic life for all three so the 600mm had to go. I could have lived with its chromatic flaws, but not with its weight and bulk. Someone younger might be up to the challenge, but it was just a bit too much for me.

The 400mm f/4 ED(IF) and the 300mm f/4 ED(IF) each fill a particular niche, and while the 300mm + 1.4X could provide an admirable long-lens solution for the Pentax 67, I find that having both lenses is useful if, like me, you plan on doing extensive landscape and wildlife work under varying conditions. My February, 2002 shoot inYellowstone National Parkis one example.

The 300mm + 1.4X serves very well when light weight and low bulk is called for. But for a really long reach, utmost quality and fastest aperture the 400mm f/4 augmented by the 1.4X really does the trick.

If you enjoyed this article, as well as the hundreds of other tutorials, features,
reviews and essays on this site, you can support its continued growth
and discover an exciting new photographic resource in theVideo Journal