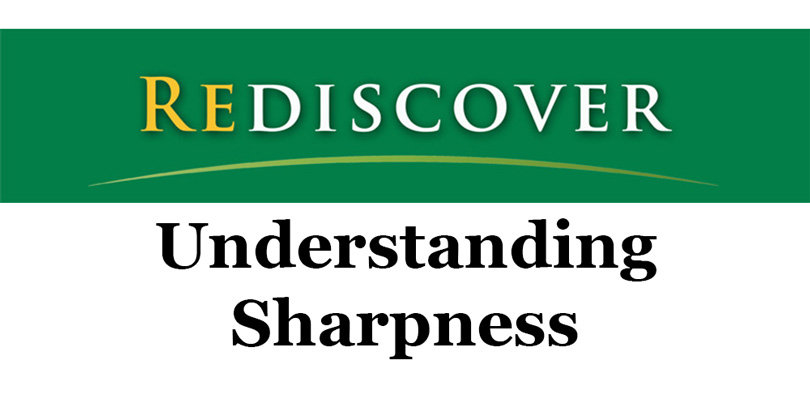 What Are We Talking About?

Photographers as a group are pretty hung-up on sharpness. I’m no exception. Unfortunately for some seeking the holy grail of ultimate image sharpness becomes a substitute for creating interesting and worthwhile photographs. Since the concept of sharpness is a means, not an end in itself, I thought it worthwhile to look at what is meant by the word sharpness as used in photography.

It actually consists of two separate concepts —  resolution and acutance.

With this article, I hope to explain these two concepts and the role each plays in our perception of what is sharp.

What You Get May Not Be What You See

The traditional measure of image sharpness is stated in line pairs per millimeter — abbreviated as lp/mm. In other words the ability of the human eye to discern the number of high-contrast pairs of lines appearing in the space of a single millimeter.

You may have read that some very high-resolution B&W films can reach over 150 lp/mm. That’s amazing. Some really terrific lenses can actually resolve somewhat over 100 lp/mm. Wow.

Forgive me, but I’m having a bit of fun with you by my editorial comments because so many photographers get hung-up on theory and specs rather than what they actually can perceive with their own eyes.

Think about the variables standing between a scene in front of the camera and a print hanging on the wall. A large number of factors determine whether or not the print will be sharp.

The lens’ resolution capabilities
The film’s resolution capabilities
Camera and/or subject motion
Aperture used and consequent depth of field as well as use of optimum aperture
Film flatness — is the pressure-plate doing its job properly?
Film thickness — are all layers in the film (color) bringing the image into focus
Film grain — sometimes grain makes images look sharper — sometimes the opposite!
Enlarger parallelism — many aren’t, and sharpness suffers
Negative carrier precision and film flatness
Enlarging lens quality and aperture used
Resolution of the printing paper used

course digital post-processing has its own issues, including…

For digital cameras, many of the same issues as for film cameras apply, as well as those for digital image processing.  Arggggh!  Remarkably, in the face of this adversity, we usually end up with crisp prints that we’re happy to show to others and hang on display.

Resolution is the most familiar of the two perceptual factors contributing to sharpness. We’ve already looked at how much resolution is needed. You may start at 100 lp/mm (though typically not more than 50 lp/mm) but along the way, if you end up with 10 lp/mm on a print you’ll have a very crisp image indeed, and even 5lp/mm on a print is considered critically sharp by many observers. (To be scientifically accurate you actually should have somewhat more resolution than this (maybe 30 lp/mm) on a low contrast image because of acutance effects).

Acutance is the less understood characteristic of sharpness. Acutance isn’t about resolving detail, it’s about the transition between edges. In other words when an edge changes from one brightness level to another. This is what Sharpening in digital parlance is all about. Scanning and digital capture soften acutance and so we apply an (ill-named) process called an Unsharp Mask to increase edge sharpness back to what it should be. Remember, this has nothing to do with resolution, the other aspect of sharpness. Unfortunately, some anti-digital Luddites still confuse the two.

Keep in mind that 35mm and medium format cameras have a very hard time producing the resolution needed for absolutely ideal sharpness. Only 4X5″ or larger can really put down on paper an image that approaches the ideal. Assuming that about 25 lp/mm is what’s needed for a typical moderate acutance image with lots of fine detail, then you would theoretically need a 200 lp/mm image on film to make this possible. ( This is equivalent to an 8X enlargement, or about an 8X10″ print). I know of no lens/film combination that can achieve this.

Medium format cameras have a lower magnification hurdle, but only the finest lenses have resolution capability comparable to top 35mm lenses. But only with the best lenses, the highest resolution films and the finest enlarging or digital image processing techniques can this be achieved. (So, instead of a combined 200 lp/mm needed for 35mm you’d “only” need 100 lp/mm from a 6X6cm system — a 4X ratio.)

Our perception of sharpness depends to a large extent on how much detail an image contains. Frequently an image with moderately coarse but sharp grain (or crisp digital noise) can appear as sharp or even sharper than a fine-grained image. This is why high-acutance film developers such as Rodinal have historically been preferred by some. They made grain somewhat bigger, but gave it higher acutance and therefore aided in creating the appearance of a sharper image.

Conversely, an image with a fine but soft grain (for whatever reason) will drag down the general appearance of sharpness that a given image might otherwise have.

Interestingly, completely grain-free images can appear to be less sharp than the resolution numbers might lead one to believe. This is the case with the old Panatomic-X and Tech-Pan films. They are so grain-free than they can appear less than critically sharp if the image doesn’t contain a lot of fine detail.

Along the same lines, in the digital realm, it’s my experience that the Canon D30 at 100 ISO is so free of digital noise (the equivalent of grain) that in some images it can almost appear to be less sharp than a 400 ISO frame from the same camera.

There are some folks who haven’t yet seen well-made high-quality inkjet prints, and who therefore mistakenly believe that these somehow can’t equal traditional chemical prints in terms of sharpness. It’s worth noting that a 6 color 1440 dpi inkjet printer (like the Epson 1270 / 1280 / 2000P Photo printers) when fed a 360 dpi output file, is capable of about 16 pixels per millimeter. This translates to 8 lp/mm — right in the high-end of the ballpark for meeting the limits of human vision’s ability to discern maximum sharpness.

This also explains why the latest generation of printers spaced at 2880 dpi (like the Epson 1280/1290) don’t make prints that look any sharper to the naked eye. Under a loupe, yes, but not unaided. The reason why we can now appreciate this is because at about 8 lp/mm we are already near the limits of the eye’s ability to resolve fine detail. All we end up with is slower print speeds and greater ink usage.

Any time you examine the issue of sharpness it must be seen in the context of magnification and viewing distance. Look at a billboard from across the street. See the pretty girl with silky long hair standing on a beach, enticing you to flee winter and join her in the Bahamas? Looks pretty sharp. Individual strands of hair are visible and you can almost count the grains of sand.

Now climb up on the scaffolding and look at the billboard from a distance of 24 inches. All that beautiful detail has been reduced to half-tone dots the size of golf balls. The image likely isn’t even intelligible any longer — it’s just big blobs of colored dots.

This explains why medium and large format images appear “sharper” than prints made from 35mm — even though the 35mm lenses may have as much as twice the resolution. They simply don’t need to be enlarged as much. To make an 8X10″ print a 35mm frame needs to be enlarged about 8X. A 6X6 frame about 3X. As long as prints are small it doesn’t make much difference. Beyond about an 8X10″ print though even the best shot 35mm images start to lose quality, while a 6X6cm based image is usually fine up to about 16X20″.

What Have We Learned?

Hopefully, this brief discussion will have shed some light on a sometimes confusing and murky topic. Remember, there’s more to the issue of image sharpness than raw numbers alone. Hone your technique and trust your eye

Rediscover, is just that. A rediscovering of some of the best-archived articles this site has to offer.

Stepping Away from Reality

FacebookTweet A cut is brutal, even if committed by the blade of a surgeon. So for Irving Penn the camera is an instrument that creates

FacebookTweet Watching the Charles Cramer series of videos here on Luminous Landscape was both tremendously educational and inspiring. It made me want to have another