Good morning! First of all, I’d like to thank everybody who made the introduction ofLenses and the Light-Tight Boxlast week such a resounding success. I need to reiterate that I’m sending out the pre-orders of my other book,The Empirical Photographer, in the order in which the they were received. I’m sorry if you haven’t gotten yours yet, but I’m working on it, and I’ve learned my hard lesson yet again: never make promises you can’t keep! Meanwhile, I’m going to extend the introductory price ofLenses and the Light-Tight Boxfor another week.

Jack Kilby, as he looked when he won the Nobel Prize for Physics in 2000.

It’s worth noting here the passing of one of the world’s great pioneers, a man who has had more influence on our lives than all but a handful of others in history. Jack Kilby died on June 20th. He was the inventor of the microchip. The Chairman of Texas Instruments said, "There are only a handful of people whose works have truly transformed the world and the way we live in it: Henry Ford, Thomas Edison, the Wright Brothers…and Jack Kilby." Certainly, our digital cameras would not have been a remote possibility if his discoveries had never been made.

Two things happened this past week, and I think it’s curious that they happened to coincide. First, I got an email newsletter message from John Sexton. If you don’t know of John, you probably should. He’s a West Coast landscape photographer who does beautifully crafted large-format black & white work in the tradition of Ansel Adams‚­ in fact, John was Ansel’s last (though not longest-tenured) lab assistant. Here’s what John wrote:

Many readers of my email newsletter will already be aware of the news I am including below. However, I wanted to make sure that any and all photographers on my email list had heard the sad news about Kodak’s recent decision concerning traditional black and white silver halide imaging.

On Wednesday, June 15, in Rochester, New York, Eastman Kodak Company, announced it would discontinue the production of all black and white photographic papers. Kodak cited "significant declines in market usage of papers designed for Black-and-White printing" as the reason for the decision. As you might imagine, this was a day of great sadness that I, along with many other photographers, will never forget.

As many of you know, I have used Kodak photographic films and papers for many years. Over the past few years, my primary printing paper preference has been Kodak Polymax Fine Art paper. I mourn its discontinuance, along with the rest of Kodak’s black and white papers, and realize it will mean inevitable changes in my own photographic printmaking. I did want to assure those who have prints on order with me that I have a sufficient supply of paper to complete all existing print orders with the paper on which they were initially printed. While there are still a few other photographic papers of excellent quality available from some manufacturers, for my own personal needs I found Polymax Fine Art to be the best choice for much of my imagery. As you might imagine, I have already begun to anticipate possible alternatives.

Here are some links to news stories about Kodak’s recent announcement:

I wish I could say that an outpouring of letters, emails, and phone calls to Eastman Kodak might change their decision, but according to friends who work at Kodak, this is a virtual impossibility. That being said, I want to encourage all readers of this email newsletter, along with anyone with whom you might share this information, to write letters to both Daniel Carp and Antonio Perez of Eastman Kodak Company.

By writing to these individuals, I believe your thoughts should reach the most prominent people in decision making positions at Kodak. I am told that letters will be far more effective than phone calls or emails in communicating your reactions about Kodak’s decision. Their respective mailing addresses are:

As I noted, I suspect there is little chance for Kodak to change direction on this decision. However, Kodak still manufactures silver halide films, as well as photographic chemicals. I believe it is imperative for the management of Kodak to realize that much greater advance warning is necessary for professional photographers and photographic enthusiasts, such as us, to plan and adjust our working methods. By choice, I have used Kodak Professional black and white films exclusively for many years. The reason for this is its impeccable quality control. To date, I have seen absolutely no deterioration in their film quality. However, I am concerned that changes could be made which might compromise the quality and consistency of their products, and I would not want to be put in a situation to have such limited lead time, if and when Kodak decides to discontinue essential products or entire product lines in the future.

I do hope that photographic manufacturers, such as Agfa, Forte, Ilford, Kentmere, and Oriental, will continue to produce fiber-base papers of high quality well into the future. To date I have never seen a black and white print from the digital domain that rivals the sensuous and tactile qualities of a well-crafted black and white silver print. Perhaps there is a company on the horizon that will see the need for an on-going truly archival photographic medium, and rise to the occasion to manufacture high quality black and white silver papers for decades to come. Let’s hope so! Moreover, let’s support any company that undertakes such a noble endeavor.

I hope that my next email newsletter will contain more positive news and information. I still love working in the traditional silver halide darkroom. I find there to be a therapeutic aspect to making prints by hand in the darkroom – gently "massaging" the light onto the paper, and handling those prints through the photographic chemistry. I’ve said many times in workshops and lectures that two or three minutes in the developer goes by much more quickly for me than fifteen or twenty seconds watching the icon of a wristwatch spin on my computer monitor. Long live silver!!! 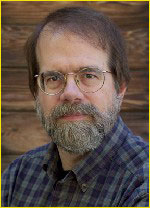 Much is being made of Kodak’s exit from the paper market. Because Kodak is a big and old company, the weight of symbolism seems attached to the move. In reality, it isn’t really as big a deal as it’s being made out to be. Kodak has for a couple of decades now been a relatively minor player in the fine-art community with regard to papers. In fact, John himself is the only photographer I know, or know of, who uses Kodak Polymax Fine Art‚­ and it might make sense that he would, since he was a major consultant for Kodak when it was developing the product. A more trenchant appraisal was provided by the all-knowing and ever-wise Oren Grad: "The real shock will be the day they stop making B&W film."

However, even if it’s largely symbolic, it really unscores the "two photographys," if you’ll pardon the neologism. On the one hand we have many thousands of new enthusiasts pouring into the hobby, led by (but not limited to) computer enthusiasts. These converts see a Brave New World. They look only forward, and their view of history is both truncated and recent. On the other hand you have longtime practitioners, who include artists, documentarians, and others who perceived themselves in the middle of a lifelong career of creating. These are people who, like John, have attained a hard-won mastery. They’re not just out exercising the latest gee-whiz technology by taking pretty calendar pictures. They have a stake in the continuity and cohesiveness of their work.

I know exactly what it’s like when a working artist loses a favorite material, and it’s a bigger deal than many people suspect. Bruce Barnbaum was a contributor to the magazine I was editing back when Oriental originally went into Chapter 11 and it couldn’t even be smuggled it out of Japan in a suitcase. I remember the trauma it was for Bruce at the time. Within ten years of my own entry into the darkroom, I lost first Kodak Medalist and then the original, graded Ilford Galerie.

The other event in my week was the arrival of a Konica-Minolta 7D. I didn’t expect to like the camera much as a camera, but I’ve felt a strong imperative lately to improve the quality of my digital work. I fear I’ve been guilty of paying too much attention to the portability and ease of use of digital cameras, and of not having quite enough involvement in the results. So I figured that perhaps a large, complicated DSLR might be worth suffering along with if it would give me the results I wanted.

The 7D has certainly given me results. I used it for two days at the lake shore. I took 63 shots the first day, and 44 the second, which is just about exactly the equivalent of 3 rolls of 36-exposure film. The first day I got at least ten and maybe a dozen really good shots, and the second day brought another 5 keepers, for a delightfully insane 15% hit rate (I’m not kidding about that‚­ I’m usually very happy with a 3% hit rate, and 1% is no surprise). 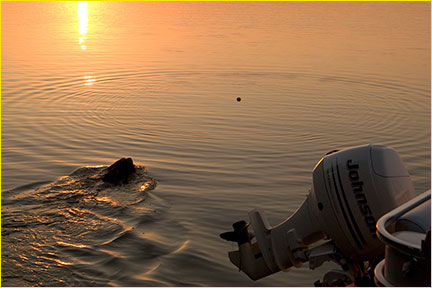 As I’ve probably mentioned a hundred times, I’ve been reviewing cameras for a long time. I haven’t kept track, but I have every reason to believe that my total is upwards of 50, and it might be as high as 75. I try to use cameras a lot before I comment on them, and I also try to either a) tailor my comments to a fairly objective viewpoint, or b) make readers aware that my reactions are personal. Well, so far, my reactions to the Konica-Minolta 7D are personal…and my problem, when I get around to reviewing it, is going to be avoiding the temptation to "rave." Every now and then a camera comes along that I just take to. I’m in sync with it. It’s easy and natural to operate, feels comfortable, and is fun to use‚­ and it does what I want it to. I already feel like I could find the controls of the KM 7D blindfolded, and I haven’t even cracked the manual yet. It took me something on the order of 20 shots before the possibility occurred to me that never again‚­ never as in never‚­ will I ever make do without anti-shake in a camera body. It’s a feature that’s as close to magic as anything I’ve experienced in years, and made an immediate positive impact on my pictures.

More temperate comments about the 7D will have to await another weekend, more experience with the camera, prints, and some thoughtful reflection. But the bottom line so far is clear as crystal: I’m lovin’ it. 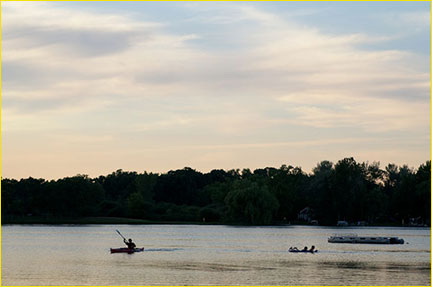