In these remarks I will try to present a more or less complete example of a book I have made on the Blurb print-on-demand platform. I treat this platform, largely, as a medium of expression rather than as a platform for selling. Normally,  I will buy a handful of copies of a book for myself and to give away, and leave it at that.

I’ve been living here in  Bellingham,  Washington state, for a handful of years now, and the summers have struck me. We’re just a hair below the 49th parallel here, so the days get very long in the summer (and, correspondingly, short in the winter). It’s a very athletic town, a lot of mountain-bikers, triathletes, a lot of small craft boating, that sort of thing. It’s a college town, and a very “sticky” kind, in the sense that a lot of graduates simply hang about the place. So, summers are filled with young people and slightly frantic activity. The place fairly hums during the achingly long days, we’re all sleep deprived from  the light and anxious to get our fill of summer in during the few short months of it we have. When winter comes, it will be dark,  it will be rainy, it will be cold. And we know it.

My idea for the book was to encapsulate in some sense my personal impression of the place in  summer, to grab a little of that intensity and stick it on to paper. Various ideas presented themselves, in no particular order:

So I shot a lot of things, a lot of subjects. Anything that struck me as particularly Bellingham, I shot. The result was a pile of photos. Any one of them could have been shot in any number of places, Bellingham’s Famer’s Market looks a lot like any Farmer’s Market. The young women look like young women, except maybe they wear boots with shorts more often here. I hoped that, together, they would convey a specific sense of Bellingham.

The point, therefore, was to distill this into a set of pictures which, when taken together, yield a composite picture that feels the way Bellingham feels to me in  summer.

Sifting through the pictures and mulling the concept over,  I ended up with, basically, three groups of pictures.

The morning glory photos were my efforts to get hold of that wild growth, the fecundity of nature, we experience here in the Pacific Northwest. Sadly, the pictures were pretty boring.  One could stand to look at 3 or 4 of them, but I had in mind masses of them, to reflect the massed heaps of vines. Photographing the massed heaps themselves was even worse. So, in the end, I wanted to put in a bunch of pictures of fairly repetitive, fairly boring, material without the result being boring. That, obviously, is a problem.

I thought of grouping these photos, perhaps 1 on the first page, a 2×2 grid next, then a 3×3 grid, and so on. Experiments proved that this was also fiercely dull, but I liked the idea of emulating growth. 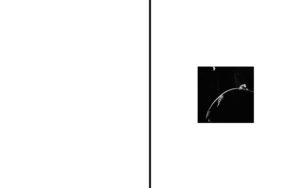 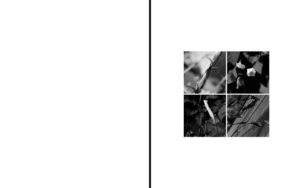 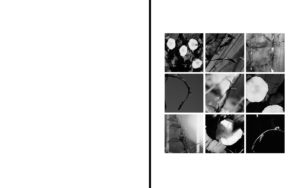 My next idea was to use tiny versions of the pictures to build vines wrapping around the street photos, something like an illuminated manuscript decoration. The morning glory photos, in these experiments, wound up being too small to “read” but again I liked the “vine of pictures” idea.

Finally, I settled on a sort  of simple animation. I would lay the pictures out on a strict grid, and then turn them on and off, from one page to the next, to illustrate the growth of one “vine” on the right hand pages, and another on the left.

My goal with these opening pages was to balance having enough pages to sell the idea, without being excessively boring. I wanted, basically, one spread “too many”, so that the viewer would get the idea, and start to speed up the page flipping to find the “real content”. This is just a perhaps too-cute concept to emulate the rapid growth of vines, and to, with luck, recreate a little of that feel of “when is summer going to get here!” These vines would then become a backdrop to the “street” photos, just as the fecund growth of plants is an always present background to our summer lives up here in Bellingham. By designing the “vine” shapes I kept a little of the idea of wrapping around, so this final design is a compromise of sorts.

Using these as a background proved a bit of a challenge from a design perspective, as the background photos tended to compete with the foreground. By applying a translucent layer of airbrushed white I was able to tone the background down enough to behave like a background without, I hope, making it completely vanish from the viewer’s mind. Then I applied a white border to the “street” material to further separate it, and called it good enough.

The next problem was to sequence the street material. This is really “the book” here, the other material really comes across as an introduction and a coda. This is where “Bellingham” lives.

These pictures had no particular natural order, and I had in mind no particular structure. They’re just snippets of life here, which when taken all together give you some flavor of how I see the place. To sequence them, then, my goal was simply to avoid jarring juxtapositions and to make the central core of the book feel structured, deliberate.

After editing this material down to the keepers, I went through them thoroughly, making notes about subject matter and geometry. I kept the picture of the child a few pages away from  the picture of the topless march to avoid a jarring coincidence. I laid out spreads that made sense in terms of subject matter and geometry. I found one visual joke.

Here is the visual joke, and you can get a sense of how I am using the “vine” structure as a background design element here: 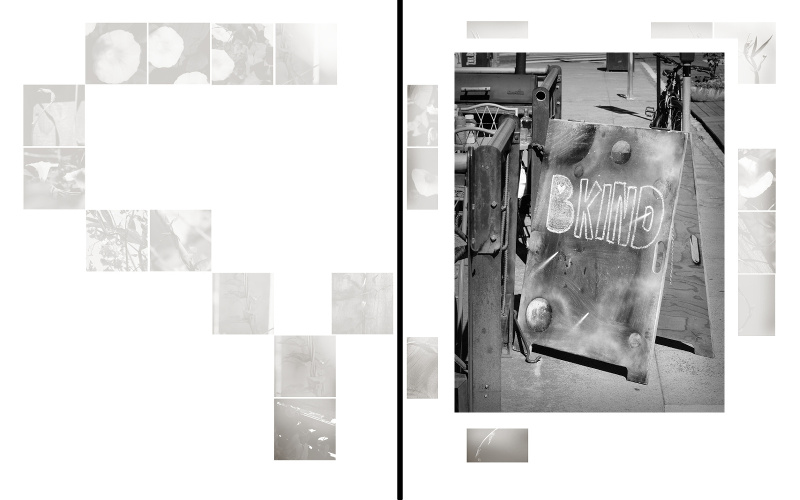 The faded vines blink out from the bottom up as the center of the book proceeds, as a sort of reference to passing time, but it’s not very noticable. The pages become less busy as you proceed, though.

This spread balances geometries left/right as well as getting a “young women” versus “young men” coherence: And finally one of the last spreads from the central portion of the book, illustrating two things: use of the gutter to suggest an alternate crop. and the way the background vine material is fading out off the top: There were only 21 pictures here, so it was not a huge chore to find an organization that worked.

Finally I was down to the coda. I had these pictures of the lawnmower which I wanted to use to wrap things up. The lawnmower, a cutter of vegetation, seemed to me a good opposite to the growth theme I opened with.

I tried them first on blank pages. Just awful. 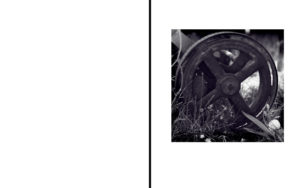 The visual density of the previous pages made this simply not work. The pictures were, again, not strong enough to carry the pages themselves (it’s really hard to “sell” a picture of a object in a book of pictures of people, among other things). I couldn’t use the morning glory based backgrounds any more, since the point is that the lawnmower opposes them, and anyways I had gradually wiped the “vines” off the page in the central material of the book.

I tried a couple of layouts, I tried inserting some blank pages to separate the lawnmower pictures in the hopes that the visual break might give me a chance to start afresh with these things. In the end it became obvious that there was some sort of background required, something visually busier, or it just wasn’t going to work with the rest of the book.

After due consideration, I decided to recapitulate the morning glory concept, but rather than a vine growing upwards, it would be autumn leaves blowing off the page to the right. Conveniently, fall was arriving by this time, so I was able to gather a collection of leaves and seeds, and to photograph them on white. I composited together some backgrounds with a swirl of this autumnal material flying off the right side of the two-page spread, and dropped the lawnmower pictures onto it. My intention had been to de-saturate the leaves moderately, to fit in with the black and white of the photos elsewhere in the book, but by accident I forgot to, and I liked the result quite a lot. The book  ends on a splash of color, and clear references to fall.

One more picture at the end, a photo of a very slight acquaintance, horribly out of focus. I loved the picture too much, and worked it in as a sort of flashback painted over with airbrushed white again, almost not-there, a reminder that summer will come again. I know, I know, trying to save a botched picture never works out that well, but I think  maybe this one is OK: Overall, I tried to create connections back and forth. The two kinds of background material refer to once another both in general form, and in color (the morning glory photos are slightly toned brownish, the fall leaves are of course brownish yellow). The material in the core of the book is littered with references back and forth in content and form, as I suggested.

The overall structure of the book is aimed to re-create the early growth and hurry of summer, the slow fading away of it, and then the brisk approach of fall.

For those of you interested in the final result, you can electronically peruse the actual book over on blurb.com. I have made it available as a “Trade Paperback,” which means rather thin paper and weak black, at this link. Note that there is one very slightly NSFW image in the book (topless female protesters in the distance, essentially.) You may, of course, purchase a copy if you like (as of this writing, I will get $2.81 for every copy sold) but my intent here is that you click on the preview to view the final product.

Does it read? Most people are certainly not going to get everything out of the book that I put in. I hope that most people will find things in it that I didn’t put in, and I hope most fervently that at the very least the book feels deliberate, structured, organized.