As I write this, a gorgeous day in Wisconsin reminds me that spring is around the corner. Spring means better weather, longer days, better light — and, to photographers, photography.

Post-PMA, the ‘Net is simply awash in exciting news of a technical and product-oriented nature. You can sure learn a lot about digital photography — it seems like a whole world of knowledge in and of itself, sometimes. But when Spring comes and the light turns nice, it’s good to remember that the purpose of it all is taking pictures.

There are many reasons why enthusiasts take pictures. Perhaps the most obvious is to get nice pictures, but this isn’t the only one. Some people do it for memories, or for sharing their lives with loved ones; some people do it because they find the doing fun; some for self-expression; and some people even do it because they just adore all the gear, the cameras, programs, printing, and so forth. Their hobby is the "stuff," and the stuff just incidentally gets exercised once in a while.

For many non-professional photographers, one aspect of shooting is that it’s not always easy. It can be intimidating, in fact. First of all, subject matter doesn’t always present itself. What are you going to take pictures of? Second, it can be frustrating to have good gear but not get good pictures. Despite deep knowledge of the inner workings of your image sensor and a complicated, carefully worked-out position in the Canon vs. Nikon debate, you may find your own pictures not living up to your own standards. And third, it can seem embarrassing. You may admire life caught on the fly, but, once you get outdoors, it’s not exactly easy to poke your camera in strangers’ faces. You may even feel awkward and self-conscious just having people watch you while you shoot.

So how do you get yourself feeling comfortable, loose, free? Here are a couple of tips, in no particular order. One or another might help apply some grease to your winter-stiffened creative joints.

— If you live in a small municipality with a local newspaper or a "suburb edition" of a nearby city’s paper, ask the photo editor if you can be a "stringer." A stringer is just somebody who submits a few pictures every now and then for consideration, and sometimes might draw the odd assignment for something within their bailiwick. You won’t earn any money for this, but you’d be surprised how much it helps to be able to say, when you’re out shooting, "Hi! I’m from theSentinel-Ledger. Mind if I snap a few pictures?"

— Make an appointment. Lots of people and organizations aren’t averse to being photographed, especially if they have an interest in publicity for some reason or another. Whatever it is you’re interested in photographing, call, and ask. At the very least, get a name, so when you get hassled you can say you talked to so-and-so.

— Shoot a roll before you start, or, if you shoot digital, a quick 50 frames. You may think such a thing is a waste of a roll of film or card space, butau contraire, mon frére. A rusty photographer is like an antique car with an engine that starts with a crank, or an early aircraft that needs some manual help to unstick the propeller. Getting going is sometimes greatly helped by, well, getting going. You’ll find that after the 36th frame or 50th exposure, you’re warmed up and rolling, and it no longer feels awkward to you to be firing away.

— Go where there are crowds. People let their guards down in a carnival atmosphere, and they feel anonymous in a crowd. It’s expected that some people are going to be snapping pictures; people don’t have an expectation of privacy. Ergo, it’s easier to shoot.

— Stand still. Huh? What does this mean? Well, people in public have a natural interest in anything novel. In many public places or spaces, you can show up almost anywhere, start shooting away, and draw all kinds of attention, most of it of the unwelcome kind. But if you go to that same place and just hang around, not doing much of anything, what you’ll find is that you "disappear" after a while — people stop noticing you. If you are alert and ready while appearing to be bored and daydreaming, you’ll find you can shoot pictures without being noticed. It doesn’t work everywhere, of course, but in some situations it’s just the ticket.

— Shoot more to get less. Let’s say you want a picture of something specific — say, a cop guarding something, or a taxicab driver, or some poor sap by the side of the road dressed as a giant hamburger. Well, if you go up to that person, ask his or her permission, receive it, then fire off one quick frame — feeling flustered and rushed as you do so — you can’t be too surprised if it doesn’t result in a masterpiece. On the other hand, if you asked permission to accompany the person for an hour and promise to send him or her a copy of the best shot, you might be able to take six rolls or a whole CF card of that person working. This is extra work, of course, on both ends — in the editing, because you are then faced with the task of finding that one "best" shot out of all the shots you took. But it’s unlikely that the picture you end up with won’t be one heck of a lot better than that one awkward grab shot. Most amateur photographers will go somewhere for five minutes and take three shots. The pro or artist understands that she won’t start to get good shots till she’s been there an hour and has shot two rolls’ worth. 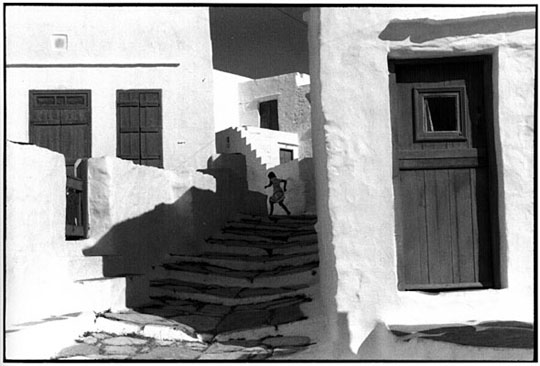 — Pay somebody to enliven a scene. I often think that photographers find great scenes that would have made great backgrounds for a great picture — only they took the scene with nothing in it. Let me ask you, do you think Cartier-Bresson’s great picture "Siphnos, Greece, 1961" (above) would have been as good a shot without the running girl? Yet this is just the sort of shot that the average photographer would have been happy taking as a static architectural picture. Often, if you ask somebody nearby if they want to make five bucks for ten minutes’ work, it’s a case ofvoila, instant model.

— Demand more of yourself. Don’t be satisfied with a simple snapshot or yet another landscape, or some cliché you’ve seen a thousand times. Be more creative with how you hunt down your shots. There are a great many ways to find and get those elusive good shots.

And when that first lovely spring day comes around, don’t forget that before you can shoot at all, you’ve got to get out of the house.

A special thanks to Frances P., who donated last week. Frances, I tried to write you a thank-you note, but I couldn’t send you an e-mail — the message got kicked back to me. I really appreciate your generosity! As I appreciate the others who have kicked in their support, monetary and/or moral!