This page contains a portfolio of images taken bySteve Kossackon a shoot in the Grand Canyon on a Colorado River rafting trip in May,  2000. Additional work by Steve can also be seenhere.

For two decades or more I’ve wanted to see the Grand Canyon from the Colorado River. That is, from one end to the otheronthe river. In 1988 my son and I made the descent and climb from the South Rim to Phantom Ranch. We did the "freeway." Down the South Kaibab and back up the Bright Angel. It just wetted the appetite.

I’ve been to Tuweep many times. It overlooks Lava Falls (one of the Colorado’s #10 class rapids). I even spent a number of days with the crew at the Bar 10 Ranch and flew into the canyon on their helicopter. It further wetted the appetite. I’ve spent many days on numerous trips on the North Rim in seasons when its open. I’ve even been chased out by snow storms in an open Jeep!

A couple of times! I’ve been on the South Rim and the Powell Plateau and Mt. Trumbell, and had lunch with the Haluipai overlooking Quartermaster Canyon in the Grand Cliffs Wash end of the Canyon. I stood many, many times at Lee’s Ferry and watched the rafts leave on a trip that I swore someday would be mine. 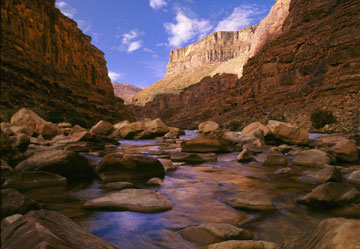 What to shoot and when? It would seem this question would be easy to answer.

Thewhenis decided for you by two things. The river,‚ it decides everything actually‚ and the boatman has thewhatbecause they make the choice on what you do and see and where you stop.

My focus is always on color first then light and texture. It was everywhere but not always together. In places they were separated by thousands of feet of rock or river. For this image I broke out my newSingh-Ray Gold/Blue polarizer. After years of using theCokin B/Ywith its heavy footprint I was eager to see what the difference would bring. In short, it’s a new way of seeing for me.

Take a look at the reflected light in the river. Notice that it has both of the filter’s colors represented, but with no color cast elsewhere. It’s amazing, and it helped make this image. 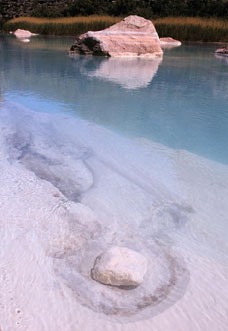 The Little Colorado. I’ve seen this river in magazines and seen some great photography from here. The most memorable was an article done on the confluence of Little Colorado with the Big River which showed an overhead view of the two rivers flowing, one brown and the other turquoise. It was striking!

The late morning sun had already taken it’s hold on the day when we arrived. Swimming was the call! But first ….. THE COLOR! Our boatman remarked that it had been a several trips for him since he had witnessed the water "this turquoise." Since the angle from the shore gave no vantage point to photograph the confluence I began to walk up river with only camera in hand. I found a foreground that had interest.  It also accented the stark contrast between clear deep colored water and the background, showing both the canyon and the river, and heightening the contrast at the same time. 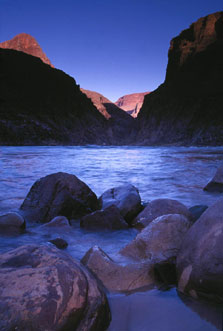 Doing photography  in the Grand Canyon is like anything else done there. The Canyon calls the shots. I found myself shooting film at a time when inThe Rim World  I’d have bagged the photography an hour or so before and be sucking down coffee somewhere.

I was forced to work with what was presented to me, when it was presented. In this image I wanted to work with the highlight. I did nothing to bring down the exposure. Instead I filled the foreground with fill light and hoped that there would be enough ambient light to give the river some reflection. The Singh-Ray blue/gold helped considerably here. Fill flash is something I like to use often. I bracket both the exposure for film and the fill. It’s not unusual for me to "burn" an entire roll on a setup. It sure makes you feel good when you get one though! 🙂

The mystery this image seems to have is more than I had hoped for at the time. 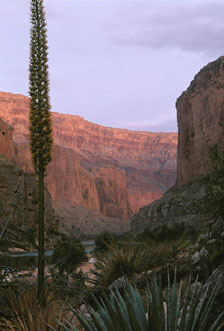 Perspective is hard to find deep in a canyon with the rim being so far above and the light so fleeting.

This image also presented a problem as to location. I found myself with this magnificent sunlit canyon wall and the only place that was easy to shoot from was occupied by our camp (table, food and rafters). Setting up there was just not an option although I overheard a conversation about just that.

C. C. Lockwood, our photography guide, was making comment on the scene in front of him. His observation was correct from where he stood. He wanted to make the image only if the camp in front of us floated out of sight. This, of course would not happen until morning when we would all leave. The camp from that vantage point was the focal point. My thought was to climb so as to make the sunlit canyon wall overpower the small camp below even though in reality it was a huge party. In the end this may well be a nice illustration for those opposed to large groups rafting the canyon.

I have two color enhancing filters in my bag. The one with the heavy footprint (magenta color cast) gives me soft color in clouds without definition. It was a plus here. 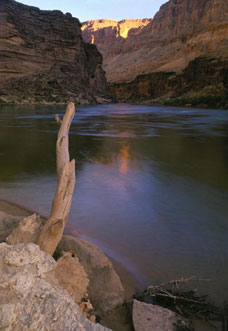 I think it was because the morning light was advancing and therefore, predictable. The real drawback was that the light, when directly on the rim, was about a gazillion stops brighter than below. I was very …. very careful with placement of the split ND’s.

My technique for split neutral density filters is to stop down the lens all the way and then using my depth of field preview I look through the viewfinder and place the line where it almost, but not quite touches the point where the spit is. I then slowly rock the filter back and forth and watch how it changes the corners or whatever is affected. Itwillshow somewhere. The trick is to place it in the shadows so you can hide this.

I’ve learned to trust my matrix meter on the EOS 1N. I’ll meter with the filter in place and bracket from there. I also will shoot the image without the filter just in case I’m not the "hotshot" I’ve talked myself into believing I am! 🙂

This photograph was taken on Fuji Velvia. All others on this page were with Fuji Provia 100F. 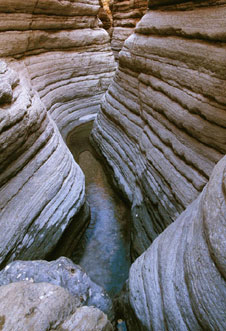 This location shows no sign of just how hard a place it is to hike to.

The creek is filled with water up to ones chest and in the shadows covered with thick green moss. I fell! I never made it to the top. I almost didn’t fire a frame.

It wasn’t until the painfully slow climb back down to the river that I saw the possibilities. At first the lack of color bothered me but my past experience in the Slot Canyons in Arizona taught me that film exposed for long periods helps in this respect. At the time I wished for a stack of ND filters but made do with my 3 stop split ND aligned to cover the entire frame.

I wedged my tripod into rocks on one side until I was able to achieve the "S" curve that gave the image flow. Because the camera was pre-set at f/22 before I put the camera on the tripod and the focus preset for that aperture, I could not see the shutter speed when I released it.

Taken with a Canon A2E (which took a short but unaffected swim on the way down) andCanon 28- 70 2.8L with Singh-Ray 3 stop hard split ND filter

You may also be interested in viewing a portfolio of photographs of
The Grand Canyon
shot at the same time byMichael Reichmann.

Mirrorless Revolution 2014 – We Said It Back Then

FacebookTweet The Mirrorless Revolution 2014 I recently published an article about the upcoming Mirrorless War. The video and article seem to have gotten a lot

A few weeks ago Kevin Raber, Luminous-Landscape’s publisher posted an article about focus stacking.  It was a great article and demonstrated Focus stacking in