A Weekly Series of Critical Essays By
Mike Johnston

Good morning…Today’s the first Sunday in April and it couldn’t have come quickly enough for us here in Wisconsin. I don’t know what it’s like where you are, but March here this year was both colder and snowier than December, January, or February. Naturally enough, though, in Springtime, a grumpy middle-aged man’s mind turns to thoughts of Leica. Even though a local meteorologist predicted that Spring this year is going to be "several hours in June…." 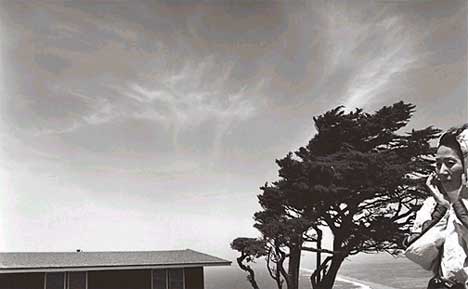 Almost all of the significant news from last February’s PMA was digital. Digital has come of age‚ it’s a rapidly expanding, dynamic, highly competitive, and high-stakes market. Manufacturers big and small are jockeying for position in the new world order.

If film cameras are quickly becoming an anachronism, though, one anachronism is so well-loved that it’s still accorded great deference: the legendary Leica. New innovations at Leica could be outpaced by your average glacier, but nobody cares much about that. After all, the Leica has already been an anachronism since about the Kennedy administration. We don’t love it any less for that. So the introduction of the new M7‚recently reviewedin full on this site by Michael R.‚ was the major event in traditional photography at PMA. Here’s my take on it, from a historical perspective.

Evolutions that are small by anyone else’s standards are large by Leica’s. The reason is simple‚ we don’t want the Leica to change. Its designers got the rangefinder right half a century ago, and since then it’s been appreciated by artists, photojournalists, and camera collectors alike.

True, it has some peculiarities. The film loading borders on the perverse, for instance. Then again, it’s sort of like a secret handshake‚ it unites the faithful. Nobody wants to see it changed to a hinged back.

The addition of TTL flash metering a few years ago was viewed with suspicion. As I wrote inPhoto Techniques, "flash is what Nikons are for." And I’ve read many a rant against the "sacrilegious" molestation of the shutter-speed dial. Finally, most "new" Leicas are nothing new‚ they’re commemorative models, or limited editions, or cosmetic conceits featuring boar-scrotum leather or eighteen coats of enamel lovingly applied by Himalayan virgins. (No offense meant to King Bhumiphol.)

Back in 1984, though, Leica hit a grand slam. It added to the M4-P a simple uncoupled light meter–creating the M6. The addition was not only purely useful, but also completely in keeping with the spirit of the Leica. It didn’t modify the essential identity of the camera–just enhanced its functionality. It was a perfect addition.

I’ve always really liked simple aperture-priority autoexposure (AE), as long as it has an AE lock of some sort. In practice it’s simply never a problem in weird lighting situations to quickly find a scene that would average correctly and hit the AE lock. And of course 95% of the time you can just shoot away and let the AE do its job. The M7’s AE enhances the usefulness of the camera. Maybe it’s not "purist," but it makes shooting quicker and easier.

My all-time favorite metering was that in the late, lamented Olympus OM-4T. Much was made of that camera’s multi-spot averaging capability, but I never saw it that way‚ for me, the OM-4T was a camera with center-weighted averaging AE that also had a spot meter and AE lock combined in a single, separate button. Marvelous. The next best thing is averaging AE with AE lock activated by a half-press of the shutter button, as on the M7. It’s fast, easy, efficient, and a pleasure to use.

Some people may say the M7’s dependence on batteries is a negative. Again, I don’t agree. You have to remember to bring film along when you shoot, don’t you? So bring spare batteries. Is that hard? I’ve never been convinced that fully mechanical operation is that much of an advantage‚ except conceptually. The idea of it appeals to some people. In practice, it’s overrated. I for one won’t fault the M7 ‚ or Leica‚ for that choice.

The most important thing that Leica did right is what it didn’t do wrong. It didn’t change the essential nature of the camera. The M7 is a pure M.

The modest evolutionary changes that have come along with the M7 are just like the addition of the meter in 1984. Adding AE enhances function without detracting from the essential identity of the camera or the spirit of the legend. If there’s a valid complaint about the M7, it’s that it wasn’t introduced a dozen years ago.

The M7 is a perfect evolution. Leica got it right again.