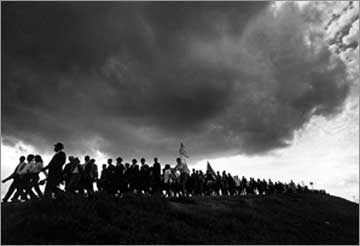 An important photographer passed away last Monday, and I’d like to pay my respects before we get into this Sunday’s column. My personal opinion is that some of the best photographers in this country are little-known, simply because they lack the vanity and aptitudes necessary for self-aggrandi…sorry, self-promotion. James Karales, who died of cancer at 71 last week, was one of those photographers who trust that their work will speak for them, and who therefore do little to push themselves. As aLOOKmagazine staff photographer from 1960 until 1972, Karales was one of the major photographers of "that tumultuous decade," the ’60s.The New York Timescalled his pictures "quietly sober," and critic Vince Aletti noted inThe Village Voicethat his work had "the weight of history, and the grace of art." Indeed. He was a fine photographer of a significant era in America.

We’re now in the middle of a golden age of photo book publishing. Amid this embarrassment of riches, not a few books get published that are minor or trivial. Truly, how many picture books of cats does one civilization really require? And yet in the midst of this surfeit there is not a single book of the work of James Kurales. A shame. We need one. Here’s hoping that his passing will help goad some responsible publisher to rectify the situation.

But now on to this week’s musings about the future and the past, which I’ll call….

The ongoing advent of digital has changed the shape of my enthusiasm for cameras. Whereas formerly I found myself most excited by beautiful old vintage cameras of the type most often found on eBay or cameraquest.com, nowadays my thoughts turn more and more to cameras so new that they don’t quite exist yet.

A case in point is the forthcoming Nikon D100, a digital SLR based roughly on Nikon’s N80. I say "roughly" because Nikon claims that the D100 is largely an all-new camera that is simply modeled on the N80 film camera rather than derived from it.

Why the D100? Well, I’ve noticed with amusement that despite the wondrous qualities of digital technology, many gee-whiz digicams and DSLRs are simply not very good cameras. Many have poor viewfinders, and a lot of them have such horrendous shutter lag that you sometimes feel lucky to capture a picture of Tuesday before Wednesday gets here. DSRLs have a different set of drawbacks‚ some allow only review, not preview, on the LCD finder, and most are stuck with lenses made for 35mm. And the best ones are huge and beefy, which some photographers don’t mind‚ or so I hear.

The D100 promises to correct a few of these shortcomings. It is for one thing a very well designed camera‚ and I mean camera, period, not just digital camera. Size, heft, hand-feel, and form-factor promise to be as good as even the best film SLRs. No mean feat. Also, Nikon promises that shutter lag will be excellent, onboard processing good, and downloading to the buffer nice and fast. All good. Plus, it’s looking like it’s going to be affordable.

The D100 is one of a crop of current cameras that achieve what used to be considered a holy grail. Once upon a time, a long time ago and far away from here, some number-struck techno-dweeb crunched some calculations and pronounced that for digital cameras to surpass film cameras in quality, they’d need six megapixels. That idea, simplistic as it was, caught on. For half a decade or more, six megapixels has been the magic number.

Of course, the nature of the holy grail changes. No sooner did Canon and Nikon announce affordable 6-mp cameras than Silicon Valley legend Carver Mead‚ one of the founders of Intel‚ announced an even newer holy grail, in the form of the Foveon X3 sensor. A conventional CCD captures color one pixel at a time‚ one pixel records blue, one red, and two green. Value is measured by the green pixels and intermediate colors are extrapolated by the camera’s computer algorithms.

What does this mean? Well, take a music CD and hold it up to a light bulb. See all those pinholes? You can see ’em, but you can’t hear ’em, thanks to the error-correction capability of CD players, which "average" the waveform on either side of the dropout and fill it in.

Consider a conventional CCD to be like a compact disk where 1/3rd of the data is real and 2/3rds is "error correction." Most of your picture is not original data‚ it consists of blanks filled in after the fact.

With the Foveon sensor, each pixel can record all three colors. More real information, less filling in the blanks. This is a natural‚ and large‚ jump forward. How large? An X3-type sensor is to a conventional CCD what Kodachrome was to a tri-color camera.

But all that aside, the D100 will offer 6-mp‚ the "old" holy grail‚ for a reasonable price. Overall it looks like it’s going to be a nifty camera.

The current crop of DSLRs, though, though, nice as they may be, are only transition cameras. We will know we are still only in the transition period to digital because the 35mm form-factor will still have hegemony. When digitalreallycomes into its own we will have DSLRs designed and built to be digital.

For now, we are stuck in oldthink.

Thirty-five millimeter movie film, which ran vertically, had a frame size of 18mm x 24mm. Oskar Barnack, the inventor of the Leica, doubled that frame size in his still camera and came up with 24mm x 36mm, which to this day is the standard for 35mm. Every digital camera enthusiast seems to be waiting for a "full-sized" sensor, by which they mean one that is 24mm x 36mm, just like, uh, Oskar Barnack intended. Not to put too fine a point on it, this is nuts.

Struggling to make a 24mm x 36mm sensor because that was the frame size that Oskar Barnack found convenient almost a century ago is a classic case of old-think. The Nikon D100‚ similar to the Canon D30 and D60 and, indeed, most other DSLRs‚ has a smaller sensor, in its case requiring a 1.5x conversion factor for 35mm lenses. A smaller sensor is a huge advantage to anyone who understands optics‚ it means lenses can be smaller, faster, lighter, and cheaper. There’s simply no downside to this.

But so far, most DSLRs have mimicked 35mm cameras and use 35mm lenses. At the very least Nikon and Canon ought to make and market one or two "digital normal lenses"‚ a 26mm f/2 or f/1.4 lens, say, that only covers the sensor of the D100 / D60 and doesnotcover 35mm. A short, fast 3x normal zoom of similar coverage would be good for business as well.

It’s not difficult for Canon and Nikon to make and market a single lens. It’s not like flying to the moon. We need a plain old normal lens made for DSLRs. That would be nothing more than a logical, sensible first step towards "newthink."

When automobiles were first made, they looked just like horse-drawn carriages. It took a few years for more logical form-factors to assert themselves‚ that is, for cars to start look looking like cars. As long as DSLRs look like 35mm film SLRs, we’re still in the "horseless carriage" era of digital. Cool though it promises to be, the coming D100, as a camera, is still an example of oldthink.

Act Now Last Chance One of the most amazing locations on the planet, especially for photographers, is S.Georgia Island and the Antarctica Peninsula. It’s been