TwentyAprils: The Classic Era of the SLR

What exactly defines a classic SLR? I’ve been known to refer to them as "MMM" SLRs, an idiosyncratic term that is sure not to catch on <s>. In no particular order, one M stands for Manual, one for Mechanical, and the other for Metal.

Most of the significant developments after 1978 revolved around the incorporation of electronics, but there have been some "classic-era" cameras introduced after that year. The most recent one, the Nikon FM3a, a true throwback, is treated in depth in the next issue of my newsletterThe 37th Frame(issue #4). But for the most part, those nineteen years comprised the classic era.

It’s true that most modern cameras run circles around classic SLRs in terms of capability and functionality. But most classic SLRs can run circles around modern cameras as objects. Often exceptionally well-crafted, well-designed devices, classic cameras can impart a tactile pleasure wholly in keeping with their direct, responsive simplicity of operation. More than a few Nikon users who have bought the FM3a, for instance, have reported that they’re simply taking more pleasure in their practice of photography since they went back to the "old ways." Although they do require a little more care and feeding than new cameras, many classic SLRs are still eminently usable. In terms of both handling and results, they can be very rewarding.

A major highlight of the era was the Pentax Spotmatic, or SP, introduced in 1964. Very durable, many remain in great condition today, and are usually usable save for their finicky meters. The Minolta SRT series of 1966 proliferated into a number of variants and were still easily obtainable new in the 1980s. Although the original Nikon F was manufactured from 1959 until well into the 1970s, the magnificent F2, which appeared on the scene in 1971, was probably the high-water mark of the classic era. Although nothing quite reaches the lofty standard of the Zeiss Contarex for quality of construction, the handmade F2 ranks with the Leica M3 and M4 as the best-made 35mm cameras of usable design. The compact Olympus OM-1 started a new fashion for small size when it came along in 1973. Although the Pentax K1000 is well-known because it was the unofficial student camera for what seemed like forever, the lesser-known MX is a better camera.

Get It While It’s Hot

So what happened to the classic era?

It’s for sale on eBay, of course. 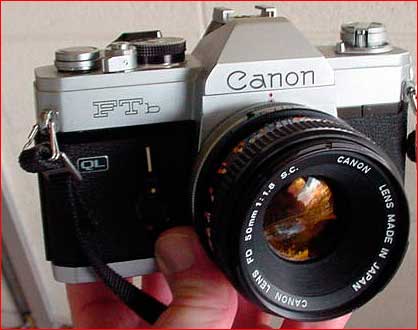 eBayer 1tu3, who has more than 1,600 sales to his credit, offered this pristine Canon FTbn for sale on eBay recently. It was sold complete with the breech-lock version of the excellent 50mm Canon 50mm f/1.8 for a paltry $129.50.

Collecting old cameras has certainly never been more fun than it is now. eBay has essentially opened up the used camera shelves of thousands of little shops nationwide for all of us to inspect in the comfort of our studies and offices, and web resources for classic cameras make it possible to learn about them without searching out and buying old books and brochures.

Ironically, some of the cameras that failed in the marketplace did so because they were built toowell. This makes them even greater bargains to buy used, since they represent craftsmanship that would cost you dearly if you could buy it new. I recently bought a marvelous Topcon RE-Super with a 58mm f/1.4 normal lens. It’s so gorgeously built that it would have to sell for many thousands of dollars if it were being offered new today. Other "also-rans" like the Miranda Sensorex, Konica T2 and T3, Yashica FX-1, and Rolleiflex SL35 are available for not much money.

Even more true is that classic cameras make great users. Your mindset does sometime have to change slightly‚ these old cameras often require a CLA (clean-lube-adjust), and sometimes getting them back into tip-top condition costs more than you’ll pay for the cameras themselves. If you’re going to be using them, though, go ahead and spend the money. Many of these old cameras are truly deluxe, and with a CLA they’ll look and feel like they are. Plus, you’ll just experience fewer frustrations and nasty surprises if you get them serviced regularly. (Several eBay sellers, such as John Titterington, are camera repairers who have already serviced what they’re selling. It’s a great way to buy.) A good Minolta SRT, a Nikkormat, or a Spotmatic can be very usable and reasonably priced.

The best bargain would probably be the Canon FD line. Canon has always been a major camera manufacturer, with lots of choices on offer and a good "installed base" of equipment out in the world. Unlike Nikon or Leica, whose SLR offerings are all still at least marginally current and thus sometimes sell for inflated prices compared to other used classics, the Canon FD line has more in common with the marques that have disappeared, in that it’s been officially orphaned.

Probably the best classic Canon to look for is the excellent FTb or FTbn (the latter doesn’t have the "n" anywhere on the body‚ you identify it only by its simplified self-timer lever and plastic-tipped wind lever). The Canon FTbn is a quintessential classic triple-M camera, and can often be found in beautiful condition. Yet it costs almost nothing by today’s standards.

I have to admit that I shoot much more digital these days than film. But almost in tandem with my increasing interest in digital has been a greater appreciation for the cameras of the recent past. Get online and see what you can find‚ in some ways, the classics of bygone decades can never be replaced.