Photokina, the world’s largest and most important photo equipment show, takes place every even-numbered year in Cologne, Germany, in the gargantuan KölnMesse convention center. This year it will take place from the 25th to the 30th of September.

Historically, many manufacturers use Photokina (technically the trademark is written with a lower-case "p") to announce their most significant new products. Although this is less true now than it used to be owing to the viciously short life-cycles of some products and the pell-mell pace of competition (obliging companies to introduce products as soon as they’re ready), it’s still the best occasion to get a handle on the present and future plans of the world’s photo equipment manufacturers. 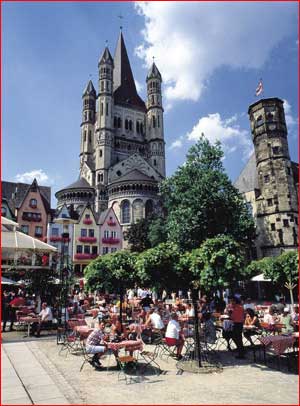 What Will The ‘Future‘ Hold‘This’ Year

This year, probably the two most eagerly-awaited introductions are the Pentax digital SLR and the digital SLR system being developed jointly by Olympus and Kodak, known colloquially as the "Olydak."

Pentax developed its new MZ-S film SLR in part as a physical body on which to base a digital SLR, and it actually announced and showed non-working prototypes of a 6-mp, "full-frame" (i.e., 24x36mm) digital SLR. Later, the project was killed. (Judging from the Contax Digital N-1 fiasco, that was a good decision.) At the time, however, Pentax promised a more modest, more competitively-priced DSLR. We’ll probably learn a lot more about that at Photokina.

Less certain but more significant are the hot rumors of the Olydak. We’ve been hearing the rumors for several years now‚ Olympus, long a leader in the camera industry and one of the most profitable of all camera companies in the 1990s, but bereft of a viable system SLR in the wake of its regrettable decision in the 1980s not to go with autofocus, would collaborate with Kodak on an all-new, from-the-ground-up DSLR camera system specifically designed to get the most out of digital.

This is potentially the greatest gamble by a major camera manufacturer since Canon jettisoned its FD mount and launched the EOS system, and Olympus is perhaps the only company that has the need, the expertise, and the resources to bring it off. Canon and Nikon certainly have the expertise and the resources, but they don’t have any great desire to replicate their entire systems in versions purpose-built for digital. But Olympus needs a system camera if it wants to play in the major leagues.

"Digital cameras are at a crossroads, with Nikon and Canon clinging to outdated lenses, camera designs, and concepts. The field is wide open to innovation, which will hopefully include a 1-megapixel electronic viewfinder, no mirror, fast flash sync, down-sized lenses, and (my personal favorite) a movable sensor to support rise/fall/shift and maybe even a little tilt."

Although I’ve never even heard Chris’s view-camera-movement idea before, basically I couldn’t agree with him more, and I sincerely hope he’s right. Digital is a new opportunity for creativity in camera design. Earlier on, we saw more creative thinking that we are seeing now‚ the split-bodied Coolpixes, the Sony F505, the Olympus UZI and E-10‚ all were efforts to re-think camera design based on new paradigms and expanded potential.

The problem for the camera companies has been that while digital is a "frontier market" (growing fast and of tremendously lucrative potential) it’s not been very profitable for anybody yet. Even a leader like Olympus has lost huge amounts of money on digital, and already some of the smaller players have been forced out of the game. As far as I know, as of 2001, Canon was the only company turning any kind of significant profit on digital at all. My belief is that this has made the camera companies more conservative. There just hasn’t been as much fresh thinking lately‚ the emphasis seems to be on making digital-adapted 35mm SLRs and fairly conventional digital point-and-shoots, in both cases essentially mimicking the status quo of film cameras. I know there are exceptions to this. But this is a natural, normal, and understandable period of retrenchment we’re in now.

Any way you look at it, the long-rumored "Olydak," if it materializes, will be a huge risk for the companies involved‚ the road to the future is always littered with might-have-beens. But the potential rewards are also huge, just as they proved to be for Canon with the EOS redesign. It’s quite possible that such a bold move will change the basic paradigms of digital camera design, jolt us out of this conservative retrenchment period, and propel us that much closer to digital’s "real" future.

A competing development is that Canon is rumored to be working on a 24x36mm 12-mp CMOS sensor slated for a future EOS-1D evolution.

The big question is, will the future be a) digital SLRs that look just like 35mm SLRs and use the same lenses, or b) smaller, lighter cameras purpose-built around smaller, less expensive sensors with more d.o.f., better macro capability, and smaller, cheaper, faster lenses?

Personally I hope it will be "b," but again, of course, no one knows.

Where Will The Megapixel Mega-Race End?

One issue raised by the Canon rumors is where the practical limit of resolution will fall. With every technological "race" in photo history, there comes a point at which an optimum point is reached and further development is not really meaningful. For instance, for many years in the middle of the last century camera companies competed to make faster and faster lenses. f/2 Planar-type lenses sold better than f/3.5 Tessar-types, f/1.4’s were considered more desirable than f/2’s. And yet the f/1.4-f/1.8 range seems to have been the watershed. Although f/1.2 and f/1 lenses exist, no one seems to have much need for them, and they sell poorly. And virtually no one is clamoring for still faster lenses. The same is true for shutter speed‚ the need for faster speeds than 1/1000th was clear for a long time, yet cameras with speeds faster than 1/8000th do not seem to gain any competitive advantage in the marketplace. 1/8000th is enough. Similarly, the race to miniaturize film formats culminated with 35mm; although there have been repeated efforts to push miniaturization still further (828, disc film, APS), none of them have "taken."

So far, greater resolution in digital sensors has been all good‚ 4 megapixels is better than 2 megapixels, and 6 mp is better still. But greater and greater resolution comes at a price‚ file size, buffer speed, storage capacity, and so forth. At some time in the future, we will reach the point where a "practical optimum" will have been achieved, and most people will no longer be willing to pay for, or deal with, more. Is that point 6 mp? Probably not. Will it be a 6-mp Foveon-type sensor? Possibly. Will it be a 12-mp 24x36mm sensor? That’s possible too. Or, it may be more than that. But of course it’s equally possible that a 12-mp 24x36mm sensor will already represent overkill for most users. Also, quite probably, the optimum point will turn out to be different for professionals and consumers. The point is simply that practical optimums will eventually "settle out," though nobody yet knows where.

Of Holy Grails and Signposts

For me, the rumored Olydak is a repository for hopes and dreams. The baseline potential for an SLR-type system purpose-built around a smaller sensor is huge. The most promising area is optics. I’ve seen it argued that lenses for such a system won’t be cheaper than 35mm lenses. That’s just absurd, and people who make that argument just don’t know what they’re talking about. It’s possible that notallfocal lengths will be cheaper than their 35mm equivalents, but long telephotos and super-wides certainly will be. And not by a little bit, either. And most lenses will be smaller and faster. What this means is that more photographers will be able to afford and carry longer telephotos and shorter wide-angles, and use them hand-held more easily and more often. There is just not a lot of downside to any of that.

And do we really need the "R" in "SLR"? It stands for "reflex," which means a moving mirror. As everybody knows, the reflex mirror took the camera world by storm as soon as instant-return was perfected. But is this really the best means of finding the view of a lens on a digital camera? Could be, but I have my doubts. Even though it hasn’t been adequately replaced yet, the reflex mirror is starting to have the feel of leftover film-camera technology. 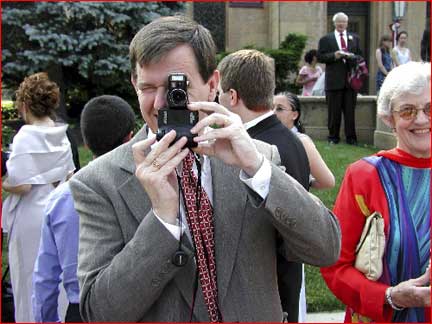 I hope the Olydak will be all I hope it will be, and I hope we get to find out at Photokina. If not, there is still a good chance that the future of digital is nowhere close to being settled yet, and that it will amount to something more than just old-fashioned 35mm with a twist. In any event, whether the rumored Olydak appears there or not, Photokina 2002 is likely to be an important signpost on the road to 21st century photography.

Mike Johnstonwrites and publishes an independent quarterly ink-on-paper magazine calledThe 37th Framefor people who are really "into" photography. His book,The Empirical Photographer, is scheduled to be published in 2003. You can read more about Mike and findadditional articlesthat he has written for this site, as well as aSunday Morning Index.

FacebookTweet 2020 was beyond easy summation. If our loved ones and we are healthy and alive, we can count ourselves lucky and be grateful. Many