Never hesitant to gird myself with armor and plunge into the holy wars, I thought I would write this morning about a favorite subject, lenses. This was triggered when I was poking around on Photo.net last night and encountered the following exchange.

First poster: "I am debating whether to buy a 50 Cron or a Konica Hexar RF kit that would get me the 50 Hexanon, plus a real M7 body. Any thoughts, suggestions, shouting, flaming, etc.?"

First respondant: "Get a nice used M6 and Leica 50 ‘Cron. That way you’ll have a real rangefinder, AND a real lens."

Later in the same thread, Dante Stella, who has awonderful websiteyou should go visit sometime, wrote something wry that made me laugh out loud. "The old Leitz made stellar cameras like the M3 and breakthrough lenses like the original 50mm Summicron. The new Leica seems to make its money injecting metaphysical doubts into the heads of the weak-minded."

I know that I won’t change any minds here that are already made up. But in case you are one of those who sometimes feel the pangs of those "metaphysical doubts," and yet you don’t wish to be accused of being weak-minded, I have good news. I may be able to help put your mind at rest. The news is that other 50mms can make good pictures too.

When you want to find out something about how something compares, your best bet is to talk to someone with wide firsthand experience. That’s the basic excuse we reviewers have for existing. Roger Ebert sees all the movies that come out; Mark Savage, who writes the car column for theMilwaukee Journal-Sentinel, my local paper, drives a new car every week, fifty new cars a year. He drives a Viper one week and a van the next. He knows firsthand how each new car compares to many, many others.

Chances are, unless you are extraordinarily dedicated, Roger has seen more movies than you have, and Mark has driven more cars.

Similarly, I’ve probably used more 50mm lenses than most of you have. As a camera reviewer for many years, I’ve taken my responsibilities, inane as they may be, seriously.

A connoisseur is somebody who delights in making fastidious distinctions of taste. On the one hand, they learn lots about delectation, but on the other, they can be hopeless nitwits, unable to see forests for trees. Or, in our present case, unable to see how pictures look past our preconceived notions of how they ought to look.

I do admit to being a connoisseur, so I do have strong opinions. But on the other hand, I like pictures, and I like lenses, and I like to think that I can rather quickly find the strengths and weaknesses even of lenses that I dislike so as to use them to good effect. In other words, I like good lenses but am perfectly capable of making pictures with "bad" ones.

But let’s look at some pictures. I know you may not be able to tell much at 72dpi, so I’ll just say that in person, all of these prints have their charm. And I’ll add my own voice-over as we go.

So‚ is this first photograph taken with a Leica? Well, yes, an M6, but no, not a Leica lens‚ it’s taken with the new 50mm f/1.5 Voigtlander Nokton. It’s a lens I’m virtually allergic to‚ I quite dislike it. But as you see, it has somehow managed to make a sharp photograph despite my connoisseurish disapprobation. 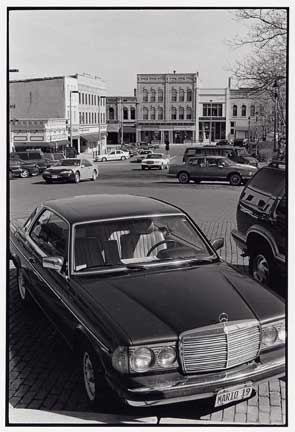 Macro lenses are supposed to be sharp, right? Here’s a nice, sharp picture taken with a very compact, utilitarian macro of no particular reputation, the Olympus Zuiko 50mm f/3.5.

Here’s a very sharp picture taken by a new macro, the Canon 50/2.5 EF, and, er, sorry to say, an EOS Rebel G (now how didthatlousy little camera manage to take a sharp picture?!?). You want sharp? This lens istoosharp. 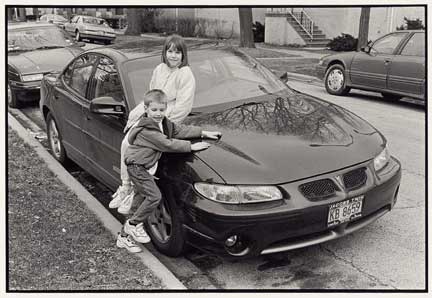 Get ready, get set‚ here’s a picture taken with an actual Leica lens! Although most of these pictures fall into the category of "samples," I like this one, because what looks like a gallon container of milk is actually, on closer inspection, a gallon of Clayton odorless fixer. No, my son’s not drinking fixer! 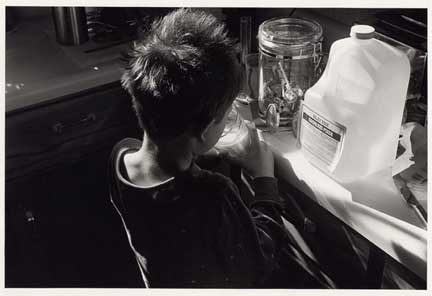 But wait, you’re saying‚ even on the monitor I can see it! This reallydoeshave the "Leica look!"

Well, that’s probably the backlighting, but it’s true. In "person" it’s a beautiful picture, and the lens that made it is lovely in its way. But it’s not exactly cutting edge. It was made with a 50mm f/3.5 collapsible Elmar from the screwmount era, on a Leica IIIf.

Here’s a Canon lens of the same era, the screwmount 50/1.8, also on the IIIf. This is in no way, shape, or form a modern lens, yet as you can see it’s somehow managed to get an image on film. Are you beginning to appreciate what I’m getting at here? 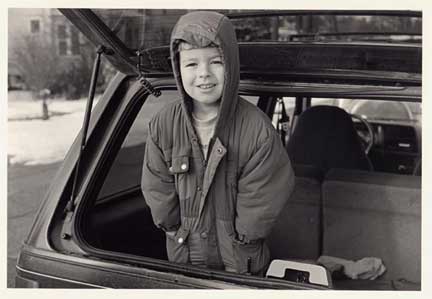 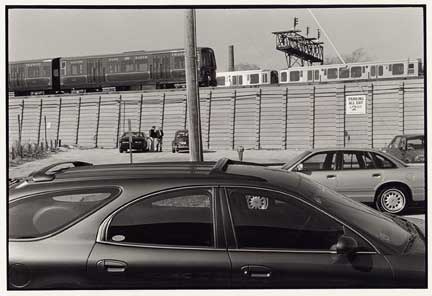 But I’ve taken pictures that look just as wonderful with another, albeit completely forgotten aristocrat‚ the M42 screwmount Pentax Super-Multi-Coated Takumar 50mm f/1.4. This is one of my favorite lenses, in fact. Its results can be simply gorgeous. Of course, to use this lens you’ll have to put up with using a Spotmatic, one of the greatest SLRs in history but long in the tooth today. An engineer at a Japanese camera company told me that if this lens were manufactured and marketed today, it would most likely have to sell for $1,200 to $1,500. I got mine for $60. (Well, okay, I actually have six of them, to be honest.) 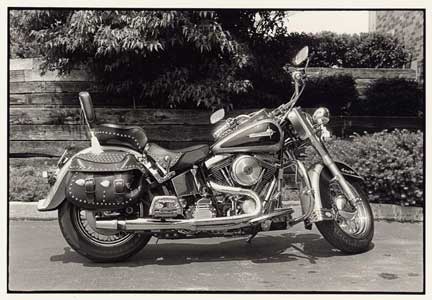 But if you want areallycheap lens, here’s a $12 special‚ a garden- variety Olympus OM Zuiko 50mm f/1.8. This lens has virtually the same cross-section as the current Summicron. No, I wouldn’t recommend it for sharpness; it’s not even close to as good as the Summicron at f/2 and f/2.8, where the latter lens excels. But as you can see, here it’s transformed a pedestrian scene into a picture of grace and delicacy, at about f/5.6. 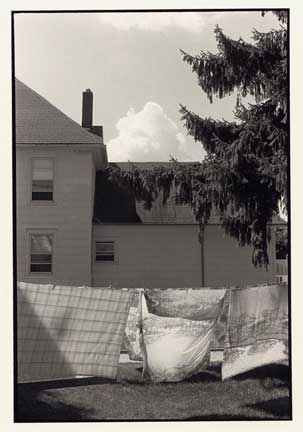 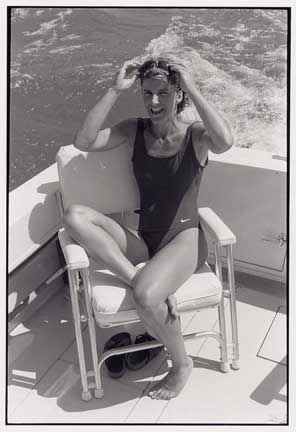 Don’t think I’ve forgotten you Nikon shooters. The current 50mm f/1.8 AF-Nikkor, at 1/12th the price of the Summicron, gets great marks on the internet. I don’t really agree‚ it’s hard to imagine a more cheaply-made lens, and I think it yields harsh highlights, a tendency you should be able to see in the skin-tones here. 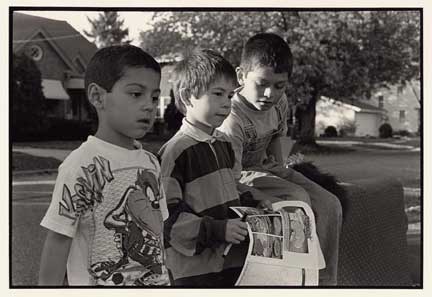 I like the old Nikkor 50/2 better. Here’s a scene from Woodstock, Illinois, where I lived for a while and where the movie "Groundhog Day" was filmed. 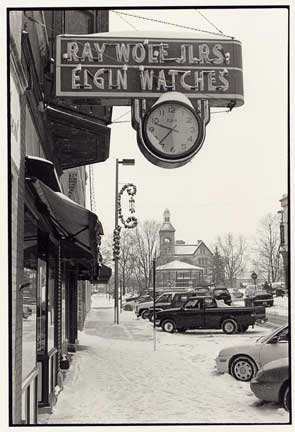 Here’s another example, shot at f/4 in the dim light of a Woodstock antiques shop. 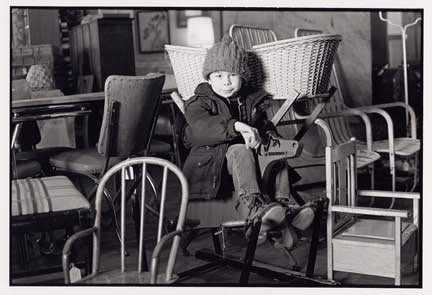 So what’s really "best"? Good Lord, gang, there is no such thing. That’s the whole point here. Lenses are for making pictures with, and what’s needed to make good pictures are good photographers!

But I can’t resist. Here’s one lens that’s utterly forgotten yet absolutely magnificent: the Olympus Zuiko 50mm f/2 Macro. You can use it as a normal lens and I promise you, you will never use a better 50mm. No matter what name is engraved on the barrel. 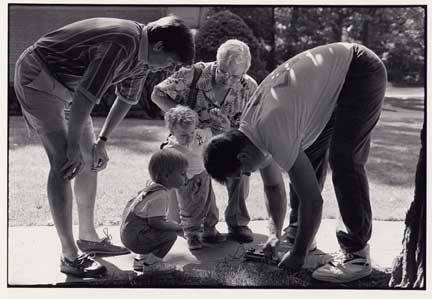 Here’s an attempt to convey this magnificent lens’s quality as a larger, higher-quality scan‚ although you just aren’t going to get direct evidence from your monitor, I’m afraid. Although the film is lowly Tri-X, the lovely optical quality is plentifully evident in the original print. (If you’re going to use this lens regularly, however, I do recommend standardizing on a higher-resolution film. I’ve found that this lens matches particularly well with either HP-5 Plus or APX 100, for example.) 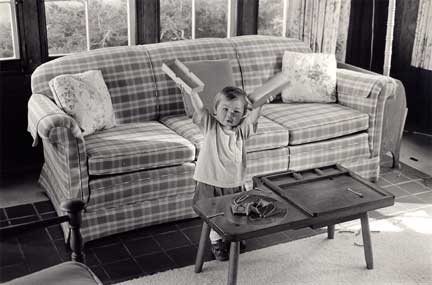 Okay, okay, we get the point

I wish I could continue this slide show. And I could continue, believe me. I’ve got example pictures from three times this many 50mm lenses. I’ve owned or tried at least one sample of virtually every 50mm M-lens Leica has made since 1953, for example.

The bottom line is, well, good news and bad news. The good news is that, if you’re a good enough photographer to make great pictures with "a nice used M6 and Leica 50 ‘Cron," you’d also be able to do just fine with, oh, say, a $150 used Pentax K1000 and a plain-Jane 50mm f/1.7 SMCP-M you can pick up for $30. And the bad news, of course, is that if you can’t manage to shoot decent pictures with that K1000, a Summicron just plain ain’t going to help.

And the Konica 50mm for the Hexar RF we started out talking about? It’s on the way. Even without trying it, though, I can promise you one thing. If it’s the lens you’ve got, you’re going to do just fine.

That is, if you can keep those "metaphysical doubts" from invading your brain. <g>

A Graphical Look In January, 2000 I returned to shoot at Joshua Tree for the fifth time. Every visit has produced somewhat different images. This