I’ve worked for five or six magazines in my life, as a writer or editor, and along the way have learned a little bit about the publishing industry. First off, most publishing companies are f#%!ed-up. They’re poorly-run, antediluvian, eccentric, or incompetent. Or, in a few cases, evil. (Oh, okay, so I’m overstating again. But take my word for it, a few readers who are "in the know" laughed out loud at the previous sentences.)

Who will be the first to go?

Compared to Japan, the situation with America’s photo magazines is parlous. Japan’s great photo magazines, such asAsahi CameraandNippon Camera, run circles, and then more circles, around their American counterparts. Why some enterprising publisher doesn’t simplytranslateone of them every month is beyond me.

American magazines are largely slanted to shoppers, and a few of the lesser ones are just relentlessly superficial. The biggest and arguably best isPopular Photography, because it’s the most professional and does the best job covering breaking news. Then there are a number of niche magazines that carve out small slices of the pie for themselves — and then have to be happy without more (that’s the problem with a niche — you tend to have to live and die there).

New pressures are being brought to bear on older photo magazines these days. If you buy magazines at all, you can’t have failed to notice that your newsstand is bulging with an ever-increasing number of digital camera and digital imaging titles. Digital is what people are buying (if you haven’t heard,Popular Photographywill officially change its name toPopular Photography and Imaging] on the first of the year 2003).

Of course the big news with this paradigm shift is that websites are taking over the reviewing functions that were previously the domain of magazines. Learning about digital is one thing the Web is great for. All the best digital news and reviews are here. And how can a print magazine compete with the Web for breaking news?

As far as innovations, the biggest news — and it ought to be bigger — is Michael Reichmann’sVideo Journal— a magazine published on DVD-ROM! Nowthat’sa paradigm shift. Half magazine, half TV program,The Video Journaloffers moving pictures and audio and can really go places that traditional magazines can’t.

All these pressures will of course have an effect on the currently available traditional photography magazines. Namely, some of them will go belly-up. Which will be the next to go? I have my ideas, but it would be crass to name names. 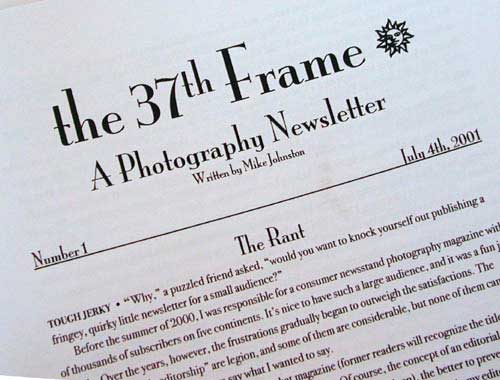 When I left the publishing industry, I started a one-man photography newsletter calledThe 37th Frame, so I guess I’m a "magazine publisher" (emphatically quote-unquote!) myself. Why? I have a contrarian streak. I like ink on paper. It doesn’t make the slightest bit of business sense, but I wanted to create my own paper product, so that’s what I’m doing. Call it a labor of love, or call it Quixotic — you’d be correct on either count.

The problem with one-man newsletters is that they’re inconsistent (guilty), don’t come out on time (very guilty — I’m now dreadfully late with Issue #4, although it really is almost finished), and they typically don’t last long (don’t underestimate my obstinacy, however). I have a tiny little readership, and I’m probably going to have to limit the ultimate number of subscribers — the circulation duties take up a lot of time, and…well, I’m lazy.

So why bother? Well, because I can really follow my muse, and my nose, and write about whatever I want to write about, in whatever way. The main essay in Issue #4, for instance, greatly expands on last week’s column. Call it my "art."

Step up to the plate

Photography magazines have long occupied the basement of the publishing industry in terms of both revenue and growth. It’s one of the lowliest categories in the entire trade. So, as I’ve long been telling photographers, if there’s a magazine out there that you really like, don’t make the mistake of taking it for granted! In the present environment, each of us needs to take a more pro-active attitude towards the niche magazines of our choice. Take my word for it, it’snota highly profitable business, no matter what you might think.

How do you support your favorite magazine? It’s really very simple: a) subscribe, b) subscribe for more than one year at a time, and c) send in your payment with your order. That’s enough. The fewer letters and notices you force the publisher to send you, the more of those scanty profit dollars they actually get to keep.

This really goes foranyniche magazine you like and appreciate, not just photography magazines.

I’m pleased to report that I’ve found a traditional magazine to write for. As the photo magazine industry follows the shoppers and drifts into digital, what I see (being a contrarian) is a need for is a magazine that unequivocally and unapologetically continues to serve the traditional niche.

Starting with the November (current) issue, I’ll be writing a monthly column forBlack & White Photographymagazine, published by the Guild of Master Craftsman Publications, Ltd., in East Sussex, U.K. It’s a slick, good-looking and friendly rag, with an impressive array of contributors. I really like its straightforwardness: in an era when most magazines are scrambling to appeal to everybody, it’s refreshing to find one with the chutzpah to subtitle itself "Any Colour As Long As It’s Black (or White)." The Web is a great place to learn about digital, but it’s nice that there’s at least one magazine that sets out to celebrate traditional optical-chemical photography as well. And makes no bones about it.

If you want to look intoBlack & White Photographyin the U.S., look for it at Barnes and Noble bookstores. It’s worth seeking out, in my biased opinion.

After I wrote here aboutThe Best (Autofocus) Lenses Money Can Buy, a lot of people wrote to chide me about how deftly I had avoided including Leica lenses in the comparison. So, okay: you asked for it. Next week’s column is titled,

Leicavs.Zeiss: Whose Lenses are Best?

I expect fireworks. See you then,

Set-Top DVD Player ProblemsQ:My set-top player refuses to play the disk, even though it plays commercial movies without trouble. What's the problem? (My PC-based DVD