Thoughts on Digicams‚ Part I

Okay, I know this may be a minority opinion. But I have no interest in digital SLRs.

Bear in mind that I’m a camera reviewer from way back. For the late, lamentedCamera & Darkroommagazine I reviewed everything from the Contax T2 premium point-and-shoot to the antediluvian Exakta 66, a medium-format camera descended from the ancient Praktisix. I conceived the "World’s 25 Best Cameras" feature forPhoto Techniquesmagazine and wrote it for the first five years or so. Over the years, I’ve shot with everything from an antique Zeiss Contessa to a Deardorff 8×10 view camera. I may not always share the majority view, but I have a broader and deeper experience with different cameras than many photographers do.

And yet I’ve always shot with 35mm. Why? 35mm doesn’t yield the highest image quality, does it?

It’s because I can do things with 35mm that I can’t do with a larger camera. Smaller cameras are lighter, handier, more portable. The lenses are smaller, faster, cheaper. Effective depth-of-field for similar angles of view is better. Smaller cameras are quicker to use and often quieter and less conspicuous.

Similar arguments can be made for digicams.

Most people who discuss cameras discuss features. I think this stems from the fact that many amateurs just aren’t very good, or very experienced, shooters. On the Internet, you can read successive user reports from two camera owners, but one may be a rank neophyte who couldn’t shoot his way out of a paper bag and the next may be from a veteran pro who shoots 50,000 frames a year. How do you know? You often don’t.

Don’t think I’m trying to say that anyone who’s a good shooter will agree with me‚ I know that’s not true. All I’m saying is that when you read the opinions about what a given camera is like to shoot with, you have no idea if he could even cover a kid’s birthday party competently. Sometimes, the great "experts" about features can’t shoot worth beans.

The Essential Advantage: The LCD Viewfinder

Using the LCD as a viewfinder has three main advantages:

Stealth. Everyone who’s ever shot with a Rolleiflex knows exactly what I’m talking about: put a camera up to your eye and point it at another person, and chances are the subject will feel "stared at"‚ and will react accordingly. Get the camera away from your eye‚ look down at a Rollei held at solar-plexus level, for instance‚ and what happens is the opposite. It makes the subject feel you’re paying attention to something else, not them. They relax. They ignore you. Perfect. Some photographers never need stealth; I need it all the time. Well, okay, maybe I don’tneedit. But I sure benefit from it. 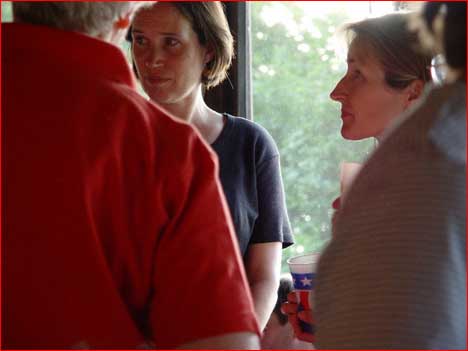 After showing people pictures shot during a vacation weekend, I got numerous comments from the people I’d been with that they hadn’t even been aware I was taking pictures. That suits both my temperament and my style. (Incidentally, the woman on the left is jazz singer Rebecca Bailey, whose highly blurred picture at the piano I discussed in my column "Key Thoughts and the Zen of Fishing" two weeks ago.)

The ability to easily put the camera in places your head can’t easily go. Up, down, over here, over there. I have a fixed-LCD Olympus that I can do this with just fine, but I especially love the articulated-LCD-finder digicams like the Sony F707, the Nikon 4500 (and earlier split-body Coolpixes), and the Canon G2 (the articulated LCD finder of which has more recently been copied by Nikon).

The ability to see the image as two-dimensional. Okay, so you don’tneedthis. We all know how to shoot with rangefinders and SLRs. Me too, obviously. But isn’t this part of the magic of the view-camera ground glass, or of the hooded Rolleiflex screen? It’s my belief that seeing a finder image reduced to two dimensions helps us visualize two-dimensional prints. I’ll admit it: I love the crisp, clean little LCD finder image. Just as I can appreciate looking at the world on a view camera’s ground glass (for those of you who haven’t tried it, it can be almost mesmerizing), I like looking at the world through an LCD finder.

For the most part, digital SLRs don’t have LCD finders. You use the regular SLR eyepiece finder and simplyreviewyour images on the camera’s LCD screen. Which may be fine for some. Man oh man, not for me.

Internet wags and camera wonks love to dissect "image quality." We all agree that DSLR image quality is potentially greater because of their larger sensors. Fine. Agreed. For landscape, nature, and architectural photography, okay.

For an image to have quality, however, you’ve got to be able to record it in the first place.

What everybody ignores but what is very important to me is themuchmore advantageous size and speed of the lenses and the greater d.o.f. that go with the smaller sensors of digicams. My Olympus C-3040z at f/1.8 has very usable d.o.f. I haven’t calculated it but my sense is that it’s at least as good as f/4 on a 35mm. And as for the lenses, no contest. The Zeiss zoom lens on the Sony F707 is about 3/4ths the size of a beer can, and it’s a 38-190mm equivalent f/2-2.4. Can you just imagine what a 38-190mm f/2.-2.4 would look like for for a 35mm SLR?!? Start with the HUUUUGE Zeiss Contax 35-135mm f/3.5-4.5 zoom, which is about the size of a can of tennis balls, only fatter, and go up from there. The 35mm equivalent to the F707’s lens would be, what, 18 inches long, have an outer element the size of a salad plate, and require a Sherpa to carry it. Something like that. I should use 35mm-size lenses when I don’t have to? Makes about as much sense to me as using medium-format lenses on a 35.

For the tradeoff, I can stand a little noise. 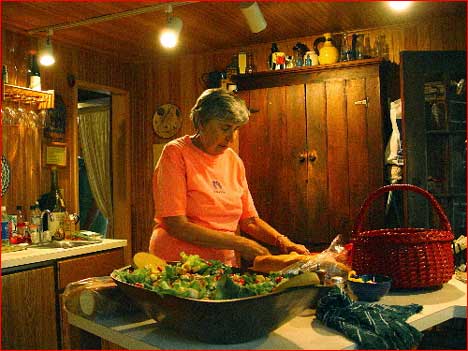 This grab shot portrait, taken at ISO 400 and at f/2, shows more noise than you’d get with a good DSLR. But look at the d.o.f. Try that with your 35mm zooms.

Now let’s talk money. Do you remember just a few years ago when really good digital SLRs cost upwards of $20,000? Just take a moment (a moment of silence, if you will) to speculate how much those cameras are worth on the used market now.Poof!Gee, magic. How to make money disappear without really trying.

Everybody’s different, of course. For some guys, the $3,000 D30 was out of the question, and other guys could buy one on a lark and then buy a D60 when it came out too. But digital cameras now are like computers were in the 1980s. Technology is leaping and bounding along. Bought yourself a $5,500 Nikon D1 when it came out? Still a nice camera, but, as an investment, it was kinda like buying Enron stock, wasn’t it? In this market, whenever you actually buy something you stop yourself cold right there, and it’s a sure bet that technology is going to overrun your positionquickly. Your investment is going to melt away. Quickly. You have to be pretty sure you can get your money’s worth out of the purchase quickly, too.

For some people, this is just the cost of having a hobby. Buy one toy today, trade up tomorrow, take the hit. But it’s a far, far different proposition than spending the equivalent amount of money on a beautiful Canham view camera or an antique Rolleiflex. A view camera is about as obsolescence-prone as a fine copy of Thoreau’sWalden. 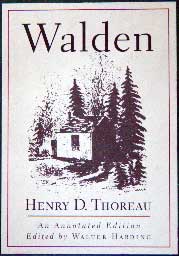 Don’t think I’m going to argue with you for a flat second if you prefer, own, or need a digital SLR. They’re right for a lot of photographers. And they’re better than digicams insomeways.

But the opposite argument has merit too, and deserves more consideration than it gets. Digicams aren’t always just the poor relations of digital SLRs‚ they have a few key advantages denied to their bigger cousins. If you’ve been aspiring to own a DSLR just because they’re supposedly "the best," take a fresh look at your priorities. You may still want one. But maybe not.

Me, I’ll take a digicam any day!

NEXT WEEK: In "Thoughts on Digicams Part II," Mike’s idiosyncratic and opinionated User Report on the 5-megapixel Sony DSC-F707. Get there before the smoke clears.