Any idea where the term‚ scuttlebutt came from? The scuttle of the water-butt was the place on tall ships where ordinary sailors got their drinking water. Standing around the scuttle was about the only place on board ship where sailors could talk without any danger of being overheard by their officers‚ in other words, where they could say what they really thought. It was sort of an ancient precursor of standing around the water cooler. * As some of you know, I write a monthly column (and, in a month or two, one longer article as well) for Britain’sBlack & White Photographymagazine, my current favorite of the print magazines. As I write this, myB&WPeditor and e-friend Ailsa McWhinnie is cruising down the Thames River, guzzling champagne and snarfling canapes. She’s likely also to get a good dinner out of the deal.

What’s the occasion? Why, Canon is introducing the‚ digital Rebel, of course‚ the 300D.

Canon states (somewhere) that the 300D is its most significant SLR camera introduction since the AE-1. The AE-1, for those of you who don’t remember, was the camera that, above all others, set the foundation for the modern Canon Corp. It was the most radically electronic camera of its day, and was designed‚ very thoroughly so‚ for efficiency of manufacture. Canon said at the time that it had a stunning 300 (!) fewer parts than an all-mechanical SLR. Most prominently, the AE-1’s top plate‚ the most expensive single piece to manufacture out of metal on any mechanical SLR‚ was made of ABS plastic, cunningly chrome-plated to‚ pass for metal. A first. 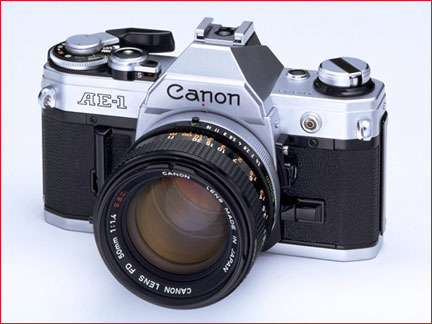 What this all meant was that the AE-1 cost less than most SLRs of its day, and, simultaneously, made more profit.

It didn’t hurt that the public bought the things hand over fist. A debonair tennis star, the famously mustachioed Aussie John Newcombe, extolled the AE-1’s virtues on TV and in print. And it was still an era BPS (Before Point and Shoots) when, if you wanted a good camera, you bought a 35mm SLR. It was easy and pleasant to use, and it ran like a Maytag. Many saw continuous service for ten, fifteen, or twenty years without requiring any service at all; although there were failures like any SLR has, the AE-1 generally ran like a Willys Jeep or the Energizer bunny. I’m not going to go look up the numbers (research is so tedious), but I believe that, before the dust had settled, the AE-1 had sold somewhere between five and seven million total units, making it easily the best-selling and most profitable camera in Canon’s entire history and also, I believe, the best-selling SLR of all time. A few point-and-shoots, such as the original Olympus Stylus, have beaten it in units sold, but not in overall profits.

So when Canon says the 300D is the most significant camera since the AE-1, it’s conjuring some powerful corporate magic. And, like everybody else in digitaldom, I’ve been dutifully poring over the available 300D scuttlebutt, getting a handle on What It All Means.

But you know what? Being a curmudgeon-in-training (when I used this term a few columns ago, I was amused to receive a number of e-mails suggesting, in a friendly way, that I might just as well leave off the words‚ in training), I’m just not terribly interested. Throughout photography’s history, there have been two kinds of progress: progress in quality, and progress in what I might term‚ CAC, for convenience, accessibility, and cost. Anyone who has ever looked at view camera photographs knows full well that most progress has been in the latter category. I mean, it’s amazing what the technology can do: it can focus your camera, advance your film, and calculate fill flash. But when you get right down to brass tacks, you can focus a view camera perfectly satisfactorily with a nice handy little knob, advancing the film on a Rolleicord is not beyond the powers of mosthomo sapiens sapiens, not to mention the average chimpanzee, and light from a flash is still harsh and ugly, just as it was when Lewis Hine was exploding heaping trays of flash powder in New York city tenements (good thing there were no smoke alarms back then. (Or was it?!?)). I’m sure the digital Rebel will sell like Super Bowl tickets, and that hordes of photographers will appreciate its high quality, lightness, and low cost. Nothing wrong with any of it. 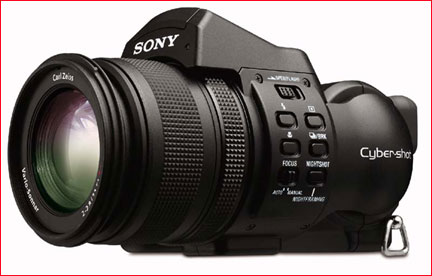 But I have to report that I find myself much more strongly drawn to the new Sony F-828. Of all the digital cameras I’ve owned, used, held, or seen, the Sony F-717 (which I wrote abouthere) was, so far, the only one that I’ve placed in my personal pantheon of favorite cameras. It was nifty, fun, cool, and different.

That last word is key. Different. The 300D, to me, is a mass-market 10D, and what’s a 10D? A digital 10S. So, okay. (Cover your mouth when you yawn like that.) The F-505-707-717-828 is a whole different experience. It requires a totally different manner of handling‚ that I liked. Its‚ preview LCD can be used as a finder‚ which I liked. Its optical image quality survived the translation to pixels‚ which I liked. And (I can’t get over this)it could photograph in the dark. It’s just a matter of taste, I know. But the idea of an 8-mp Sony F, with a lens that goes down to 28mm equivalent (the 38mm-equivalent wide end of the F-707 was, for me, that camera’s main weakness), plus all the advantages of the F-717’s originality, plus all the incremental improvements Sony’s made since the antediluvian days of the ancient F-505, plus apreviewLCD, and so on, and so forth‚ well, that makes my mouth water.

Christmas is coming, and Christmas will pass. The digital juggernaut will march onwards, and in a few years we’ll be talking about the 300D like we talk about the D30 now. Another AE-1? I don’t think so‚ the pace of change is far too rapid these days for that.

But for the moment…well, whaddaya know? I guess the curmudgeon-in-training finds himself a Sony man. And how‚¬Ëœbout dat.

* I got this from Jerry Dennis’s excellent new bookThe Living Great Lakes, which is a terrific read if you like that sort of thing. Jerry Dennis is one of the best nature writers at work today.