People say that digital is fundamentally different from film because it’s changing so much more quickly. But it’s not like film camera technology has been standing still. Just to name a few of the most obvious developments in the past two decades: autofocus; multi-segment evaluative metering; built-in motor drives and winders; lighter weight and lower adjusted cost due to polycarbonates and improved materials science; press-molded aspheric elements in lenses, resulting in far less spherical aberration at wide apertures; extra-low dispersion, anomalous partial dispersion, and fluorite elements in telephotos, greatly reducing chromatic aberration; and TTL flash metering and CPU-controlled fill-flash. And those are just the bigger developments. The changes are not as dramatic as we’ve witnessed in the ongoing development of consumer digicam CCD and CMOS sensors, but if you compare a mid-’70s Canon AE-1 with, say, an EOS-3, it becomes a bit difficult to support the argument that 35mm film camera technology is mature and unchanging.

Still, it’s true that digicams are more like computers than like 35mm film cameras. But in order to use a computer, youdohave to buy one. I normally get at least three years out of my computers before I replace them. The best computer I ever had (well, it wasn’t even mine — it belonged to my employer) was a Mac Quadra 605. That thing worked eight hours a day, five days a week, doing everything I needed it to do and then some, for six years — and during that entire time I had not asinglecrash or screen-freeze. The only time it failed was when the little battery on the motherboard that jump-starts the monitor ran out of juice and had to be replaced. Which happened exactly once. That’s all.

Within three years, it’s probable that something similar that gives better results than the camera you bought will be out there available to buy. But in the meantime, you will have taken tens of thousands of shots and printed hundreds, and your DSLR or digicam will have more than paid for itself.

What about buyer’s remorse — the worry that the camera’s feature set will be superceded by something clearly better? Well, think about this. The one thing you know for absolute certain is that something better is going to come outeventually. The digicam you bought won’t be the last digicam ever made. So do you really care if your camera’s replacement comes out tomorrow, or next month, or next Christmas, or a year from now? What’s the difference?

The fact is, you can make yourself just as crazy going the other way, too…waiting and waiting for the Next Big Thing. The fact is, cameras are for taking pictures with. If you’re eternally waiting for the next step instead of buying a decent camera, you’re not going to be taking a whole lot of pictures.

Also, we can worry about resale value. As long as a digital camera is new and hot, the demand for them will be reasonably strong. But they cool off mighty quickly when a better model comes along. The introduction of a successor camera could affect the resale value of the camera you bought. Okay, this is true. This could cost you some money.

All over the internet, it seems like gearheads and equipment mavens are always industriously comparing the merits of three competing digital cameras. Doesn’t matter which ones you pick — six months ago it was the D100, S2, and D60. Last year it was the Dimage 7, Sony F707, and Coolpix 5000. Next summer it will be the 10D, *ist D, and S3. The momentous question always is, Which One Shall I Buy?

Is it just me, or does this whole exercise strike anybody else as being faintly silly? In most cases, aren’t all three of the cameras good ones? Aren’t all three going to be old news within a year or two? Isn’t it possible to find enthusiasts of all three models who love ’em? Beyond fastidious little differences, brand loyalty, and personal preference, what the heck difference does it make? Buy one and get to work. Is it really such a hard shopping decision to make when all three choices are so close to being equivalent that it’s hard to detect major differences at all?

Any given person could almost blindfold themselves, pick one at random, and within a few weeks of acclimatization they’d have gotten used to the camera and be making nice pictures.

Strangely, though, what this makes people do is buckle down and work harder and harder to reach their conclusions — and then it makes them doubly partisan and belligerent about the rightness of their choice. What’s the point here? Ego? Arguing for the sake of argument?

For Pete’s sake. Here’s the question: You’re considering three competing cameras. They’re all decent. Which one should you buy? And here’s the right answer: one of ’em. 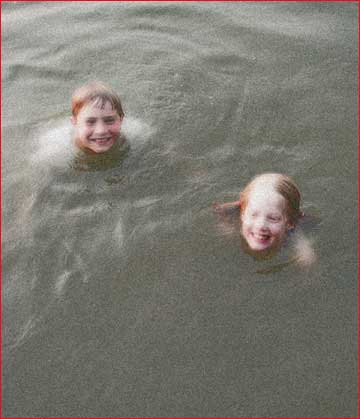 Okay, I admit, I do have a tendency to construct arguments, as if I were a debater. Above, I’m either making a cogent case for going ahead and buying whatever you want, or else I’m rationalizing like crazy. Your call. Even after everything I’ve said here, I have to admit that I bought a copy of Photoshop Elements not long ago — right before Elements 2.0 came out. No, I’m not angry about it, but I’m not exactly thrilled, either. No matter how hard you try, you just can’t win with this stuff all the time.

My advice, though, is not to worry yourself sick about whether you’ve made the optimal shopping decision: you can’t take pictures if you don’t have a camera. So you pick your moment, jump in, and just hope you made a good enough decision this time around. If not, well, maybe you’ll have learned something, and you’ll do better next time. Here’s one thing I’ve learned about photography over the years that translates to digital: photography is expensive. If you want to be a photographer, you just kinda hafta drop the cash you need to drop and then stop shopping and get down to work.

Life Among The Ruins