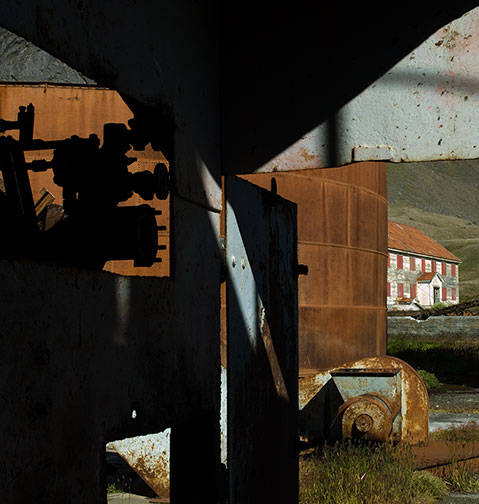 The ruins of a whaling station at Gritviken, South Georgia island.

I saw a documentary on TV a while ago about a remote tribe found upriver on the Amazon in the 1960’s. They had had little to no prior exposure to the outside world, and when a documentary film crew arrived at their village for the second time in a year, with footage shot during their previous visit, the crew set up a movie projector running off a portable generator and showed them the film.

The point of the anecdote is that none of the tribes people could at first understand what they were seeing. They had no experience of seeing flat two dimensional representations of realty. Their culture had no experience with painting, and not even drawing existed in their society. So, when shown the film they simply could not figure out what it was they were looking at. It was light and colour and shapes and patterns, but that’s all.

It was explained to them what they were seeing, and after a while, maybe 5-10 minutes they started to be able to "see" the images, and thenceforth could see them for what they were, and could make sense of them, just as you or I.

What this addresses is that the comprehension of visual images is a form of language, and just like all human language it needs to be learned. Most people do this at a very early age, and do so unconsciously. We as parents are even unconscious of the fact that small children are learning this language along with English, Spanish, French or whatever it is we speak at home.

The Language of Art

Every art form has its own language. Some of us pick up a bit of it along the way, some of us become proficient at it, and others just can’t understand a word of it even though it surrounds them every day of their lives.

Let’s take music as an example. I have a great love of music; from the blues, to jazz, to classical and rock. Music pervades my life. I listen to it on the radio, CD’s, my iPod, and yes, even live concerts. It’s the soundtrack to my life. But I have no musical training. None whatsoever. I can’t read music notation, and other than the music jargon that I’ve picked up by osmosis from album liner notes and concert programs, I really don’t "speak" music.

Compare this to people who have learned to play an instrument, who can read sheet music, or even those who have a more formal musical education at an academic level. We both may listen to the same piece of music, and we both may derive a similar pleasure from the experience, but that person’s understanding of what they are listening to is profoundly more in-depth than my own.

This does not diminish my love for or appreciation of music. And by no means am I suggesting that a trained musician or someone with an academic background in musicology has a superior musical experience (maybe, maybe not), but it just serves to illustrate that the art of music can be approached and experienced on a number of different levels, depending on how well one understands the language of music.

Another musical example is opera. I am a big opera fan, and attend it regularly, especially when I travel. But though I understand German a bit, and French a bit more, and Italian not at all, I still love opera, even though it’s fair to say that I can understand barely a word that’s being sung on stage or on a recoding. The reason for this is that I know the story line of the opera, and if I don’t for a new one I read up on it before attending a performance. This means that there issomeunderstanding of the "language" of opera, if not the language itself that’s being sung.

This is somewhat akin, I suppose, to my moderate ability in German or French. I can travel, direct a taxi, order in a restaurant, and ask directions in those two languages. But, I could never hold even a moderately sophisticated conversation in either one.

Painting too has its own language. If one is ignorant of the history of painting it become difficult to do more than be able to look at a painting and say – "That’s nice. I like that"; or, "I don’t get it". The invention of perspective, the Renaissance, modern art movements – all have changed the language of painting, just as English has changed from the time of Beowulf to that of Shakespeare, and since then to Hemingway or Roth.

So what does this have to do with photography? 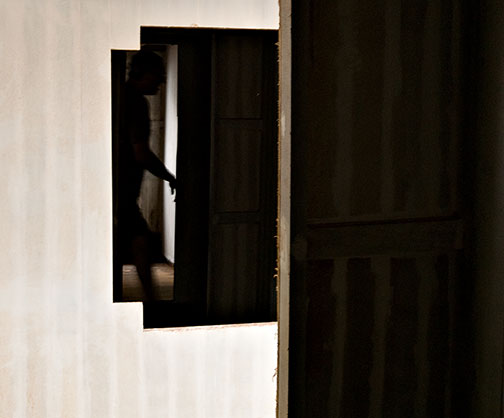 Visitng a ship yard in Manaus Brazil, I saw photographer Jay Maisel walking past this series of open unfinished windows.

Photography is no different than any other art form in that it has a distinct language. That language evolved from the earlier visual arts and then branched out into its own linguistic line, from the work of the pictorialists of the late 19th and early 20th centuries, the f/64 group, and then the numerous movements and sub-movements that grew and branched out of them.

Looking at a photograph today one can read all sorts of influences, some of which may be deliberate, others undoubtedly unconscious on the part of the photographer. But the truth is that as photographers we all stand, if not on the shoulders of giants, then at least in their shadows.

My thesis then is that to be a photographer, or to at least move beyond the ranks of those that take pictures of their cats while testing for backfocus, one has to look at photographs. Look at lots of photographs. Not glace. Not browse. But look – study – ponder – consider – analyze, and question. Why does this work, and that not. Why do I like this one, and not that one. Can I articulate my thoughts and feelings about what I am viewing?

Visiting galleries and museums is the best way to do this. But books are a good second best, maybe even better for some. The web is the worst. Reproductions are small, of dubious reproduction quality, and rarely presented in a coherent fashion. In fact I would say that looking at photography books, collections of work by single photographers or themed anthologies, is likely the best way to grow as a photographer.

In my seminars one of the questions that I often ask people is how many photography books they own. Not Photoshop how-to manuals, but real books of photography. I usually find a direct correlation between that number and the quality of the participant’s own portfolios. Not always, but enough of the time so as to reinforce my belief that viewing photographs with the intention of better understanding what they have to say is a beneficial road on the way to becoming a better photographer oneself.

Just as one can’t really learn a new language without hearing it spoken and by practicing speaking it oneself as often as possible, so to with photography. Do you want to be a casual participant circling the periphery, enjoying what you see, but not really understanding why, the way I am with music? Or do you want to become someone for whom the language of photography becomes comprehensible?

As the old joke has it:

How do you get to Carnegie Hall?

Specialty Papers and Some – A Review Of Some Special Papers

Specialty Papers + Some Over the years I’ve been reviewing batches of fairly conventional papers, be they matte or gloss/luster and observing the growing diversity

The old saying goes...You can't fight city hall. This is true as well for the laws of physics as they apply to camera design. As