Getting Better: The Crucial Sentence

Are you perfectly happy with your photographs? Do you think you’re already as good as you can be? If you’re one of these lucky (or deluded!) few, then stop reading: this column isn’t for you.

If you’re more typical, you may be somebody who’s been interested in photography for a long time, knows a fair amount about it, and is reasonably well equipped, but still wonders about ways to improve.

My friends say I’m always qualifying things, but first, a few disclaimers. Tens of thousands of people read this column every week, and I know there are photographers among them who are better, more experienced, more famous, and/or more active than I am. I know this for a fact because I know who some of them are. Okay, so here’s the thing: this column may not be for them, either.

Second disclaimer: my personal position about photography as a hobby, activity, passion, or art, refined over twenty years of working with photographers and thinking way, way too much about it, is this: anybody can do anything he or she dang well pleases. We all have our little peculiarities and peccadilloes. You like to scratch-mix print developers? Go for it. Feel a pressing need to help address the world’s critical ongoing shortage of color flower pictures? Get busy. Like to create databases of d.o.f. tables or the sale records of used 1970s third-party lenses? Be my guest. Feel that posing as a boudoir photographer is a good way to get women to take their clothes off for you? Fine by me. Think your life won’t be complete until you have more money invested in equipment than most sane people have in their IRA’s? It’s your money. Enjoy getting online and writing endless snide, bitter comments denigrating anyone who you feel owns a worse camera than you do? Knock yourself out.

Although you may detect a trace of flippancy in the above, don’t think I’m not serious. I basically (and honestly) have no objection to any of the inconceivably multitudinous things that people find to occupy themselves with in this hobby. If it’s not a crime, then it ain’t nobody’s business but your own.

But this idea probably isn’t for most of those people, either. This one is for people who want to learn how to take better pictures. People inthatcategory may be a minority, but hey, I try to please everybody sooner or later.

My principal approach to photography is that I come to it with an essential sympathy for photographers. I’m not a curator, not a critic, not a scholar, not a technician, not even a reviewer, although I play a pretty good game when participating in all those activities. Rather, I identify with people who are trying to accomplish something with pictures. This usually, though not always, has something to do with self-expression. I appreciate their struggle. I enjoy working through the problems that creativity confronts photographers with. 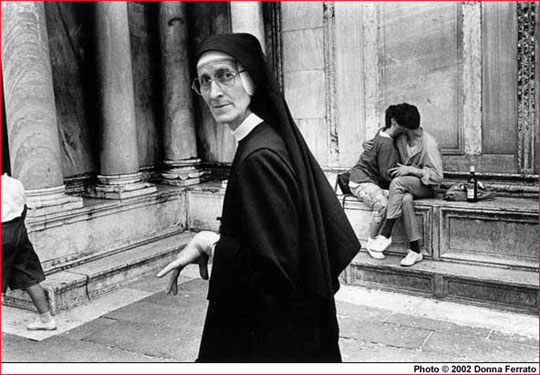 One of my absolute favorite recent pictures, "Nun In Venice" by Donna Ferrato, a photographer who really knows what she’s about. To see more of Donna’s marvelous work, gohere.

A few weeks ago, in response to my column about turning pro, a young photographer wrote me an e-mail that began, "Dear Mr. Johnston: I have a passion for sports and my goal is to be a staff photographer for a major sports magazine." He went on to describe his situation, his goals, his response to what I’d written, and so forth.

When I wrote him back, I told him that what he said in that very first sentence gave him a distinct advantage over 90% of the photographers in the world:

If you can possibly fill in that sentence with something that really makes sense for you, then it is, as the saying goes, half the battle. People who can make such a statement decisively and unambiguously have just leapfrogged ahead of the large majority of all other photographers.

You can fill it in any way you want. Here are just a couple of examples:

"I have a passion for Formula 1 racing and my goal is to get pictures of all the major drivers."

"I have a passion for my family and my goal is to create a record of our life that my children can pass along to their own grandchildren. I also like to take pictures of our kids that please my wife."

"I have a passion for scrapbooking and my goal is to make at least one scrapbook every winter (which will include some photos)."

"I have a passion for freight trains and my goal is to spend every second Saturday making roster shots."

"I have a passion for fine printing and my goal is to make 4×5 negs of outstanding quality so I have something to sink my teeth into in the darkroom."

I could go on. And on. (Well, if you’ve been readingThe Sunday Morning Photographerfor a while, you know how I can go on!)

Here’s what I suggest: don’t justthinkabout this. Sit down with a piece of paper and a pencil. Write some things down. See if, in two minutes, an hour, a week, or a year, you can fill in the blanks in that crucial sentence such that it makes a statement you’re completely, 100% comfortable with.

This is going to sound strange, but, if you manage to do this, I can almost guarantee that you will begin to do better work almost immediately.

Try it and see!

I’m very happy to report that my first book on photography,The Empirical Photographer, will be published in a matter of weeks — if all goes well, before the Fourth of July. It collects a number of my essays on photography, some serious and some not-so-serious, some previously published in magazines in the U.S. and England and some that have never before seen the light of day. The book includes several of my most popular and controversial magazine articles. All, in my humble opinion, are among my best work.

The Empirical Photographerwill eventually be sold through bookstores (although you might have to order it), and through conventional online sources such asBarnes and Nobleonline andAmazon.com. However, I will be offering signed "pre-publication" copies of the book to readers of this column, at a significant price discount, when it first becomes available. Please don’t send money or inquiries now! I’ll let you know just as soon as I get some copies.

I’m also relieved to report that about 90% of the copies of Issue #4 of the newsletter have now been mailed, including all the requested sample issues. As for the other 10%, well, I’m "marching on Baghdad," so to speak. If you haven’t gotten yours yet, wait for it — it’s coming. Really.

A name derived from the name of a mother or maternal ancestor.

It’s easy to see that the terms maternal, maternity, matron, and matrimony have something to do with the sense "mother" and are related to today’s word, but what could metropolis, material, matter, matriculate, and matrix have in common with them? A metropolis is, literally, a mother city; matter and material derive from Latin materia, woody part of a tree, its source of growth; one matriculates to what is to be an alma mater; and matrix comes from Latin matrix, a female animal kept for breeding. All of these terms are ultimately offsprings of the Indo-European root mater-.

"Then there was Stephanie, the cow, contentedly chewing her cud in the pastures at Ottawa’s experimental farm until along came Stephanie, of the engendered human variety, to object that she considered it `offensive’ to have to share her matronym with a cow. So — presto! — faster than you can say `tax cut,’ the farm’s director announced that henceforth all cows will be called by gender-neutral names like Poopsie or Moo or Milk.com."

"I know a few people who have gone for the lottery approach, naming all the children after the first, who gets the patronym or the matronym depending on its sex. This is quite neat, as no one can blame anyone else later on in life."

The above comes from "AWAD," A Word A Day, written by Anu Garg, which is botha free subscription serviceanda book. Dedicated, in this instance, to all the mothers out there — Happy Mother’s Day!

Note: I’ve finally received some review copies of new books to write about, so the "SMP Book of the Week" will return soon!