The Nun’s Hand (and Other Thoughts About Taste)

Good morning! Before we start, a brief bit of newsletter news — I’m talking, of course, about "The 37th Frame," my Quixotic little paper equivalent of a blog. Issue #4 went over surprisingly well, considering how long people had to wait for it. I was unsure of my opening essay ("Records, Books, and Photographs") but the responses it generated have made me blush. A blanket thanks to those who sent such kind comments.

Issue #4 is now completely sold out, however, due to increasing demand. Issue #3, which contained the seven lens reviews, is long gone. New subscriptions, starting from about two weeks ago, therefore, will start with issue #5, which is due to be printed in June. #5 is the "Ansel Adams" issue, and also contains my "rant" about the scandal that’s got art-photography insiders abuzz. The lens reviews will recommence in Issue #6.

If anybody wants to get on board in time for issue #5, please be aware that it may sell out right after it’s published because I’ve got three little advertising schemes in the works right now. I’m just not sure how demand will work out. I’ll print more copies next time, but then, I printed morelasttime, andthey’reall gone.

But enough about that….

I got an interesting question last week in the form of an e-mail from an SMP regular in England that I thought I’d talk about this morning. Read it for yourself:

You say that Donna Ferrato’s "Nun in Venice," with which you illustrated your columnGetting Better: The Crucial Sentencetwo weeks ago, is your current favourite picture. Each time I look at the pictures that you like, I cannot understand what it is that you like about them. Not that I dislike them, I just have little feeling of any kind!

Especially so with "Nun in Venice." But I am eager to learn. I wonder if you might think about writing something in yourSunday Morning Photographercolumn about what it is in this photograph that you like so much. I am at a loss to understand, and I wonder if I am not alone. I think it would be a very interesting topic. At the moment I feel like I am the only one not seeing the Emperor’s magic suit of clothes.

This is a variant on a common question that I think all critics, photo magazine writers, teachers and professors, and photographers themselves are confronted with periodically. The question, more bluntly put, is "Why the heck do you likethat?"

There’s no one right answer here, of course, so I can look at this from both sides. Most importantly, though, there ain’t no Emperor. What I mean is, I’m not privy to any secret Guild card or arcane knowledge that somehow bestows upon me the right to say what’s good and what’s not. When I say I like something, I just mean I like it. I’m not implying thatyoushould like it, or if you knew more you would like it, or you’re a Philistine fornotliking it. We all get to have our own taste.

Looking at it the other way around, however, I think I can venture some guesses as to why initiates or savants feel that you should like what they like. The first reason is a variation of expert theory. Some people like certain subjects a lot; and because they care, and are heavily involved with the subject, and have learned a lot about it, they can get impatient with the broad mass of the average public who don’t know much about it and have never really bothered to find out. I’m not saying that this defines Ken, just that it may account for why some critics seem so supercilious.

Thus, someone who loves music may have little patience with those who feel that the height of musical expression is the semifinal round of "American Idol." Someone who loves art doesn’t have a high opinion of those "starving artist" sales at local hotels where oil paintings for over the sofa are sold for $59 each. An audiophile may have little patience for someone who thinks their new boom box is the greatest because it’s from Bose. A veteran fisherman may not care for trout farms where you catch tank-raised fish with a bamboo pole baited with a piece of marshmallow. A diehard racing fan may not approve of a guy who pronounces a race "boring" because there haven’t been any crashes. You get the drift. The fact is, most people experience most things at a very superficial level.

The hardest thing to do when writing about photography is to be clear about something you like and not sound unutterably boring at the same time.

So why do I love Donna Ferrato’s "Nun In Venice"? Well, to start with, I like pictures of people. Second, I like pictures caught on the run, nabbed from real life as it were — I don’t care for setups, rigged pictures, static pictures of static things. I want pictures that have a little chaos in them, that are offbeat and off balance. And I like black and white and tones of gray. All that’s just taste.

In this particular case, the human-interest cliché in the picture is the juxtaposition of people who’ve chosen very different ways of going about their lives — the intertwined couple and the nun passing by. That’s nothing particularly new, although if you like people-watching you might appreciate it. I like the particularities more — the little detail on the left, the ancient stonework, the way the kissing couple are so elegantly intertwined — overlapping, almost meshing; they look drawn.

But what really gets me about that picture is the nun. Her face, stern, dessicated, angular, her smile tolerant, her expression kindly and mild but with just the merest hint of hostility. Even when I look at her for a while she still seems enigmatic. To me it’s a face to study.

And then that hand. That wonderful hand! No artist would think to drawthat. The nun’s hand hand makes the picture, of course. Where everything else about her is formal and restrained, that hand is extravagant — hung out there like a sign, goofy, fey, uncoordinated. It’s far more expressive than her face. The woman might be a reserved nun in a black habit, but that’s a gawky teenager hand, earnest and awkward and not at all sure what to do with itself. Remove that hand (I almost did, in Photoshop, but it’s a copyrighted picture after all) and the picture stops being anything special. It’s always marvelous, to me, when somebody catches something like that hand, and it happens to work with the whole rest of the picture. It’s the kind of tiny accident that 35mm street photographers hunt for and hope for. 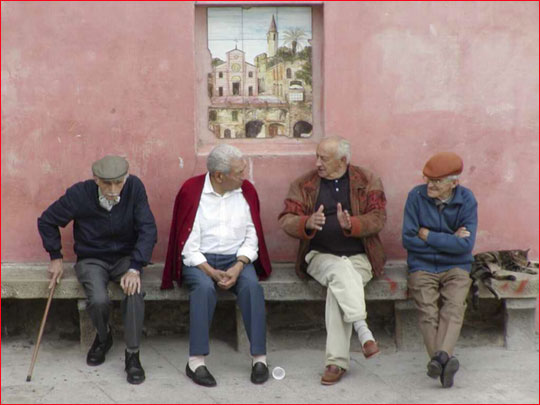 Four Men and a Cat, by Ken Croft

Further along in our e-mail conversation, Ken admitted that the more I talked about it, the more he began to like "Nun in Venice." I guess that’s another reason to be articulate about pictures — to help open things to people who might not have been open to them before. Then Ken sent me one of his own pictures (above).

Well, sorry to disappoint you, Ken, but I like your picture too! It’s balanced and symmetrical, something that often drains vitality from pictures, but that works here. Even the cane and the cat balance each other at either side of the frame. For human interest the body language and dress and level of involvement of the four men is nicely modulated. Who’s feeling what? It isn’t so hard to tell. The landscape that isn’t really there in the window that’s not really a window strikes a quirky note (the guy on the left seems to be looking intently at something like it, doesn’t he?). What really brings this shot off are the colors, the roses, reds and rusts set off by those dark and powder blues.

A nice shot, and one to be proud of.

Photographing The Art of Nature and The Transformative Power of Seeing

FacebookTweet “Imagery is the natural language of our soul… it is the projection of our very essence. It is a gallery of portraits in our

William Neill: Interview For a Retrospective

FacebookTweet “I refer to nature’s beauty as my ballast in the storms of life.” JR: I’m very interested in the artist’s and photographer’s deepest intentions, how