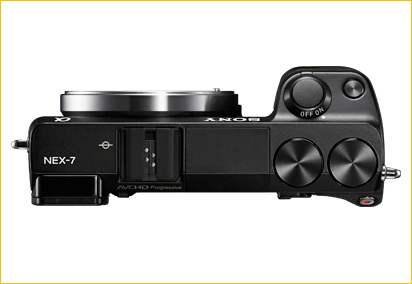 The Big Problem with the NEX 7

As reported repeatedly on this site and on many others, Sony made a giant blunder with the location of the video button on the NEX 7.  It is in a place on the grip where it constantly gets inadvertently pushed by simply grasping the camera.  To make matters worse, there is no way to disable or lock this button.  You push it and the camera immediately starts shooting video.

In early May, 2012, during the workshop and exhibit that Michael Reichmann and I did in Toronto, the owner of44 Wide(where the printing workshop and exhibit took place) purchased a new NEX 7.  I alerted him to the video button issue and he scoffed telling me he would be careful and it would not affect him.  Two days later, he confessed that he had never taken so much video of a lens cap in his entire life, and he was really getting annoyed by the issue.

I have shot many hours of video of the inside of my bag, the lens cap, my shoes, etc.  The problem is annoying enough due to the waste of batteries and memory, but the real issue that makes it worse for me is that I have missed a number of really good, perhaps once in a lifetime shots because when I bring the camera up to my eye and press the shutter release nothing happens.  The reason is that the camera is in the middle of shooting video and it will obviously not shoot stills while in this mode.

In my view, this situation is unacceptable.

Although just about every review of the camera complains about the video button, and each and every user I have spoken to complains about this issue, after more than 9 months of the problem being widely published, the Sony reaction has been silence. Nothing.

I experienced this issue on my first day of working with the NEX-7 at thepress launch in August 2011and reported it immediately to senior Sony representatives. That this was a known issue from the product launch until today does not, as Mark says, speak well for Sony’s responsiveness to a serious design flaw. – Michael

As a NEX 7 user, I find this unacceptable and quite sad.  Unacceptable because when I spend my hard earned dollars on a product and the product has an obvious flaw that can probably be easily fixed by a simple firmware update, I feel that the company owes it to their customers to provide a fix as soon as possible.

Quite sad… because I was recently reading that Sony reported yet another year of huge losses and one must wonder how a company with such great technology, brilliant engineers and huge resources seems to have lost its way.  It has given up huge markets to others and in spite of brilliant engineering it has failed to properly test its products and to satisfy or respond to customers the way it should.  Unfortunately, the NEX 7 is yet another example of a camera that should have been an A+, but has several substantial flaws that Sony could and should fix but for some unexplainable reason refuses to do so.

Let us hope that  they do something to regain their mojo, otherwise it will be very sad to see them go the way Kodak went….

I finally got fed up waiting for Sony and decided to take matters into my own hands.

Those living in the United States and Canada are very familiar with Rednecks, so they can avoid the following explanation.  However, we have many readers outside these two countries who may want to know what the term “Redneck” means:

The popular etymology says that the term derives from such individuals having a red neck caused by working outdoors in the sunlight over the course of their lifetime. The effect of decades of direct sunlight on the exposed skin of the back of the neck not only reddens fair skin, but renders it leathery and tough, and typically very wrinkled by late middle age. Another popular theory for the origin of the name stems from the use of red bandannas tied around the neck to signify union affiliation during the violent clashes between United Mine Workers and the owners of the mines between 1910 and 1920.

Some historians claim that the term redneck originated in 17th century Virginia, when indentured servants were sunburnt while tending plantation crops.

A redneck is usually typified in current popular culture as a straight male with a beer belly that consumes cheap American beer by the case. They are generally distrustful or dislike anyone not like them. The stereotypical redneck lives in a trailer, and drives an old, large, beat-up pickup truck. He generally wears a stained, sleeveless t-shirt, blue jeans, and a trucker hat. His favorite activities include hunting, shooting at road signs and lights, professional wrestling, NASCAR, monster truck rallies, car engine repair, and collecting junked cars and large appliances on his front lawn.  Rednecks are known for having way too many children and dogs, participating in domestic disturbances, and waiting around for their welfare checks.

They are famous for performing repairs to electric systems, plumbing or defective machines by using simple objects that can be found in a junk yard or a small town hardware store.  This has given rise to many jokes in the United States, as the repairs can be flimsy and look comical, although sometimes they do work.

So without further ado, I present to you theSony Nex 7 Redneck Edition: 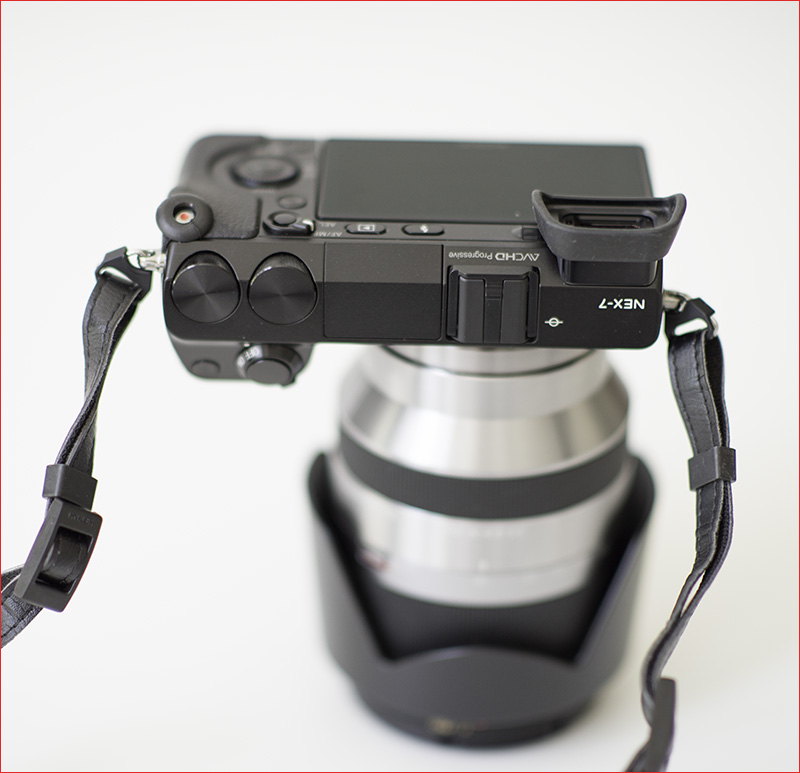 Sharp readers will immediately notice the rubber grommet mounted around the video button (the one with the red dot).

Here is a different view of the NEX 7 Redneck Edition: 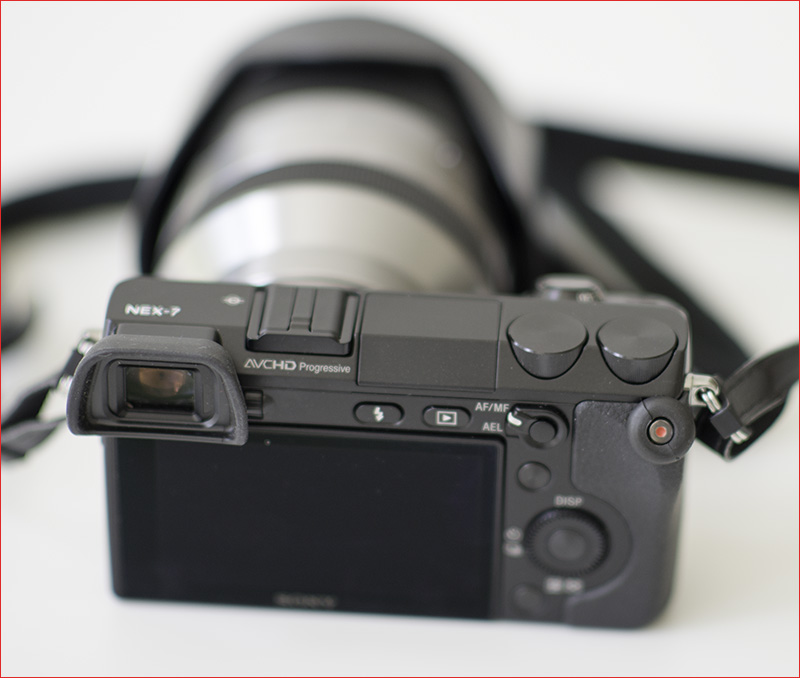 Another view of the Sony NEX 7 Redneck Edition

How does it work?

The solution was for me to go to the hardware store and purchase a gromet with a hole slightly larger than the diameter of the video button.  Most grommets happen to be too thick, but they are easily cut in half (like a bagel) with a sharp X-Acto knife.  This reduces the thickness and provides one flat side.

After cutting the grommet as described, I used a small amount of super glue on the flat side (Gorillabrand super glue specially formulated for rubber leather, etc. works extremely well) and glued it to the camera.

I hope this “Redneck fix” will be helpful to those who use the camera mostly for still images and are desperate to get rid of this problem.  I also hope that everyone who has experienced the problem will let Sony know.  Even though I am not optimistic, one never knows, and the more we complain the better our chances of getting Sony to finally do something.

Sadly, I expect this to be about as likely as Canon adding a proper mirror lockup button to their DSLRs. – Michael

If anyone has an alternate solution, I would encourage you to share it in ourdiscussion forum.

There is one other aspect to this issue that was also apparent since day one, and has been known to cause cardiac arrest among NEX-7 owners. This problem is that the NEX-7 inexplicably maintains two separate directory structures for its video and stills files. So, when you first discover that you have shot 20 minutes of the inside of your camera bag, and you delete the offending video to clear room on the card, the  camera displays – DELETING IMAGE S . Note the plural!? Even if you are just deleting one video file, or one still image, it says IMAGE S . Heart attack number one.

Heart attack number two is that after you delete the offending video file and then press PLAY the screen displays NO IMAGES, even if you have shot hundreds of raws or JPGs on the same card. The reason for this is that there are separate directories for the two types of files. The simple solution is to shoot a quick still, and now the stills directory of files becomes available. There is also a convoluted way through the menus, but life is too short to delve into Sony menu land unless one really has to.

Sony – you’ve known about these issues since August, 2011. Isn’t it time that these to were corrected?

See all articles by Mark Dubovoy

Mark Dubovoy is a well-known photographer, educator, writer and businessman. His images are a unique combination of impeccable aesthetics, a deep love for nature and flawless technique. His unique background, starting in the darkroom as a child, combined with a long-term career in science and technology, are clearly evident in his work. He is a master printer in many traditional and digital methods and considers printing an integral part of the creative process. Mark’s love of the technical aspects of photography is only exceeded by his passion to reveal and document the natural landscape, the hidden beauty in objects and the personalities of wild animals. While his main area of focus is landscape photography, he has also completed a number of projects photographing the animals of Africa, rare automobiles and images of flowers. His photographs are included in a number of private collections, as well as the permanent collections of major Museums, including the San Francisco Museum of Modern Art, the Monterey Art Museum, the Berkeley Art Museum, the Museum of Modern Art in Nanao Japan and the Museum of Contemporary Art in Mexico City. His images have also been published in a number of magazines and books, including the Best of Photography Annual, International Edition. Mark is a highly regarded technical expert in many aspects of photography. As such, he has been and continues to be an advisor, consultant and early tester for a number of manufacturers of high quality photographic products. Mark has also been a major contributor to a number of print and online publications. He has been an instructor and a leader of photographic expeditions and workshops around the world, including places like Antarctica, Iceland, Africa, Mexico and others. Prior to founding Photo Aesthetics, Mark was a regular contributor to PHOTO Technique magazine and Editor-at-Large of The Luminous Landscape. Mark holds a BS degree in Physics from the National University of Mexico, and MA and Ph.D degrees in Physics from the University of California at Berkeley. In addition to his involvement in photography, he has had a long and successful career in science, technology and early stage companies in Silicon Valley

By: Sean Reid Leica Digilux 2 @ ISO 200, converted from RAW As I see it, an exceptional camera needs to be successful both in terms

FacebookTweet INTRODUCTION The last couple of years has seen an expansion in the full-frame mirrorless sector. All the major camera manufacturers, including Nikon, have stepped