I’m sure my recent columns have had something of the flavor of a zealous conversion. It’s been a much more gradual thing than that, really. I think what accounts for my enthusiasm is just that I experienced a good week of shooting. I hadn’t had a good week in a while, and it was nice to get a rich lode of good shots in a short amount of time again. When I’m not doing well with my shooting, it always feels like I have no idea where the heck the next good pictures will be coming from, or evenifthey’ll be coming. It’s always a pleasure to have a good stretch.

My friend Oren Grad alerted me to a rumor aboutJOBO USA. If it’s true, it’s too bad. My friend Sam Proud worked for JOBO USA for years, and the head guy, Ricke Stauffer, ran a tight ship – a very ethical and service-oriented guy.

But really, if there’s a canary in the coal mine, color RA-4 print processors had to be it.

Consider this message I got from another friend in the same batch as Oren’s:

This weekend I am going to be photographing much of my analog camera gear in preparation for sale. Most of the Leica M glass will go including the Bokeh King 35/2 Summicron IV, the 28/35/50 Tri-Elmar-M, and the Summicron 50/2. I have not yet decided whether to sell all of my Olympus OM gear. ‘Tis a sad day, but I must face reality. I am a digital man.

I almost hate to say it, so fond am I of the old ways, but the K-M 7D has tipped me over into being a digital man. The practical advantages of anti-shake and high-ISO for shooting are just too great. Consider the following picture: that’s just one not-very-bright light bulb lighting the scene, and the camera was hand-held, and the lens (a mere ƒ/2.8 zoom, for heaven’s sake) wasn’t even wide open. I know what I can and can’t get with a 35mm film camera. I just could not have gotten this shot to look this good with 35mm. 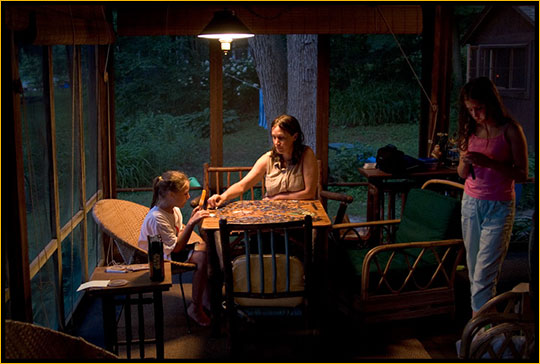 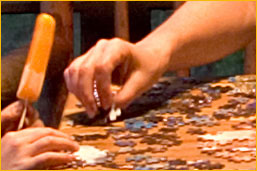 Lest you say I could have gotten the same or better picture with a tripod, you have to consider how the shot was made. It’s a true candid. It was taken in the space of a few seconds, literally in passing, as I walked into the cabin. The three people in the picture weren’t aware of my presence (or, if they were, they were so used to me snapping about that they ignored me). It’s true that if youstart outwith the idea of a picture like this one, and you set it up and pose the subjects, and take the time to put the camera on a tripod and all, you’d get a technically decent shot with film, or a digicam, or using a DSLR without anti-shake. But what you’d end up with would be a different picture. The accidental details matter to me; I’m not about creating little pictorial simulacra, I’m into recording the way things actually look. I don’t start out with ideas of what I want to end up with; I want to shoot found scenes and then see what works as a picture.

And here’s another one. I’m not the most talented apple in the basket, and I’m not the most technically adroit guy around, either. But I’ve been a photographer for a lot of years now. I photograph my own way and have gotten some good examples of the type of picture I like to look at. And at some point, the whole point of technique just comes down to what works best. The bottom line is, I just don’t think that I would have gotten either of these pictures, looking this good, with any other kind of camera. The good news is not digital, necessarily, or the Konica-Minolta 7D of which I am lately so enamored, or high-ISO DSLRs in general – the good news is getting shots we like. That’s pretty much the whole ball of wax, right there. 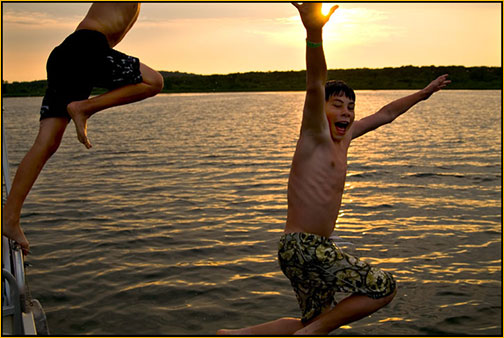