Photographs and Report by: Bernard Languillier

I am just out of thePhoto Imaging Exposhow here in Tokyo, and would like to share some quick impressions with my fellow readers ofThe Luminous Landscape.

Some bits of intro first. PIE is the most important photo event in Japan. It moved in 2001 to Big Site, a large exhibition complex located in a relatively new part of Tokyo called Obaida. It is usually held first in Tokyo in March, and is then replicated in Osaka and Nagoya later on in spring. 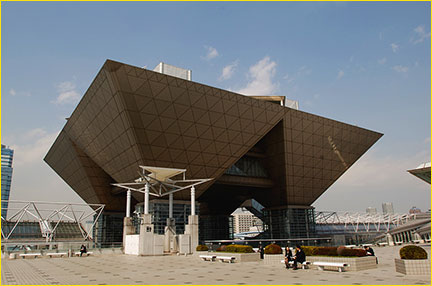 PIE has become more ambitious over the years and is now a full fledged event attended by most major vendors in the industry. However, most Japanese top notch products announcements had until now always been made at the overseas giants Photokina and PMA. It seems that the marketing strategy of some key players might be on the verge of changing as Pentax just presented exciting new stuff at this years PIE… Read on. 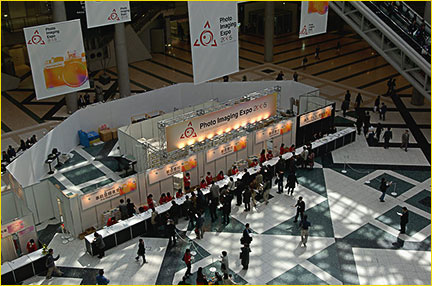 No time to waste; let’s have a quick walk through the booths of our favourite brands. As a disclaimer, the review below is by no means exhaustive, and I do admit that I very much focused on those brands I have a personal interest for… Forgive me in advance if the gear for which you were expecting updates is not listed below.

Nothing very new on the Canon camera side, which isn’t surprising considering that they introduced the 20D and 1DsMKII duringphotokinalast year, followed by the new 8MP Rebel in February. A company representative told me that the Japan special20Dawas due to be released in about a month from now. He wouldn’t tell me if they had plans to sell it abroad too. 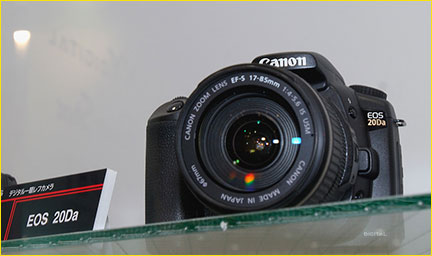 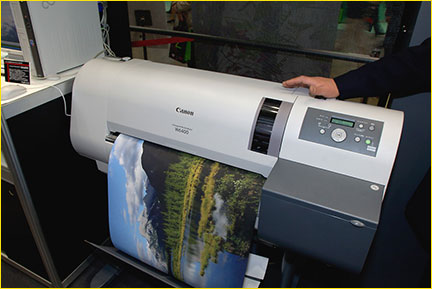 The W6400 can print up to 609*18000 mm, while the W8400 can go up to a paper width of 1117 mm. They are able to do exact borderless prints on A and B standards papers. The default print drivers ships with .icc profiles for the Canon papers compatible with this printer (at least Glossy photo and semi-gloss photo). Canon does also market 12 meters rolls of Hahnemuhle Photo Rag 188 and 308 for the 2 printers.

In terms of archival quality, the representative claimed that a non-protected print displayed on a wall without direct sun exposure would last at least 50 years. This would obviously have to be confirmed by independent reviewers. The print speed announced for the W6400 is fast, at about 4 mins for an A1 print on photo glossy paper, while the W8400 is said to output an A0 in 7 mins.

The samples that I saw (mostly made from 1DsMKII) where very nice, but there would be a need to compare side to side with an Epson 4000 and HP 130 to see who wins in terms of colors and sharpness. The Canon seemed competitive from what I saw at least.

Besides the Coolpix S1 there was very little new on the Nikon booth.

I asked the representative if they had any news on the successor of the D100, but he declined to comment. He did however confirm that Nikon had plans to release prime DX wide angle lenses in the future.

The most remarkable features of the Nikon booth was the display of D2X prints made by 8 famous Japanese photographers of various specialties. The A2 prints were simply stunning. Especially worth mentioning were aerial shots by Tokunaga, the undisputed master of plane photography. 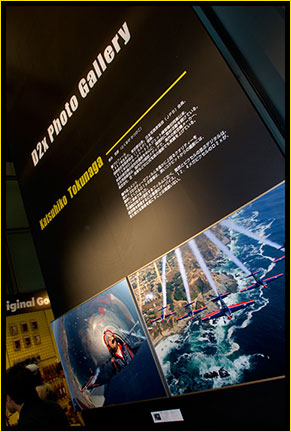 Besides the Nikon field scope the booth was putting the emphasis on their FSA-L1 adapter for DSLR. They had a D70 mounted on a Field scope ED82, which resulted in an equivalent focal length of 1500 mm… hard to beat.

I had a chance to play with a working pre-production sample of the ZD. The body handles pretty well and seems to be reasonably responsive. The images appeared on the TFT screen on the back of the body about 2 sec after the image was taken, which is not as fast as my D2X, but much faster than the Kodak SLR/n I used to own. It seemed completely usable. The viewfinder is bright and large, probably somewhere between a D2x and a Hassy H1 for instance. The AF seemed usable, although it is of course far from being as fast as those of a top DSLR with USM like lenses.

The Mamiya person said that they had plans to release a vertical grip for the ZD later on. 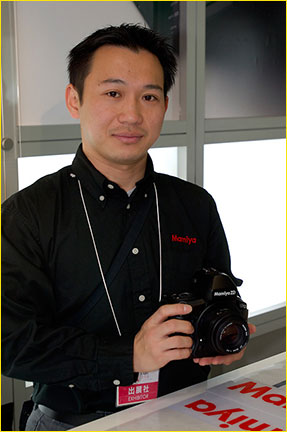 I didn’t try to take test images with it since it would have made no sense at all to grab blurred snaps of their booth anyway. I don’t know whether they would have accepted this or or not, but I guess that they would probably have refused.

Some some A1 prints of good quality were on display. Let’s hope for the best. 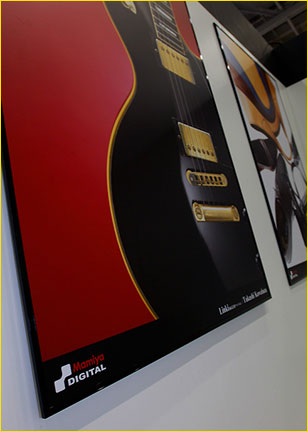 The spokesman I spoke with declined to provide a firm delivery date, but mentioned that they were trying very hard to get it out before summer 05. He said that the ZD would probably be released before the back for the 645 AFD. He mentioned that the design of the hardware was basically already completed but they were still working on finalizing the firmware and RAW conversion software. He did seem rather confident though.

Not one, but… three mock-ups of the recently announced 18.6MP 645 were on display. These feature different body styles, and it seems that Pentax still hasn’t decided which way to go. They were even asking visitors to cast a vote for their favourite design… pretty hard to do without having the chance to touch the bodies… 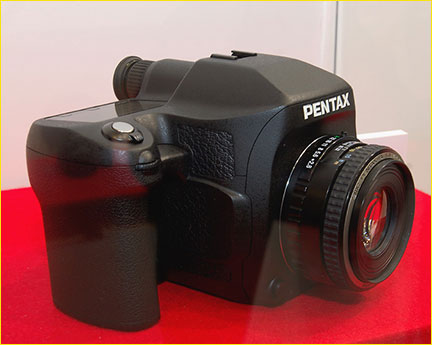 No detailed specs were available besides those already published on the web.

The engineer I spoke with mentioned that the camera was targeted for release early 2006, and that price would be competitive with that of the Mamiya ZD.

Besides the 3 new APS lenses introduced before the show, there wasn’t a lot going on on the Minolta booth.

I tried to get the Minolta folks to disclose some of their roadmap for future DSLR releases, but they understandably declined to comment.

Very nice prints made from S3 files were on display on the booth.

Besides, those still shooting film might be interested in their Fortia announcement. Fortia was first released in limited numbers in Sept 04. The film boasts dyes specially designed to reinforce the strength of primary colors. I had the chance to shoot about 10 rolls of 120 Fortia during fall last year in Japan and was impressed by the colors it delivered.

Fujifilm did it again, but this time it is called Fortia SP, and has reinforced pinks and magentas. This film is clearly targeting the Cherry blossom season in Japan due to start early April. For the rest, it is the same as last year. The batch will focus on 35 mm and 120, and will be produced in limited amounts for Japan only. He mentioned that between 10.000 and 20.000 pro-packs of each would be produced (5 rolls per pack). 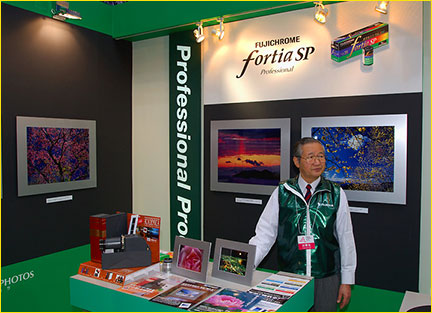 I also asked the Fujifilm representatives what had happened to their 20 MP digital back for the Hassy H1. They explained me that it has been delayed, mostly because of the demand for the Fuji 680 III back which far exceeded their expectations.

They told me that they still had plans to release the 20MP back for the H1, but that they could not commit on a schedule. 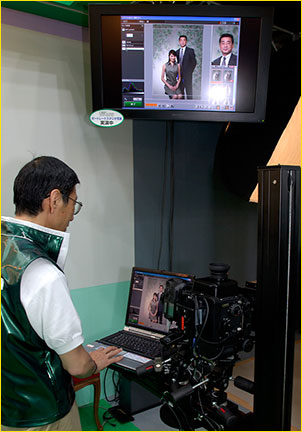 The Japanese wooden camera manufacturer chose to use its home show to introduce their new 57SU, which might end up hurting my wallet badly… 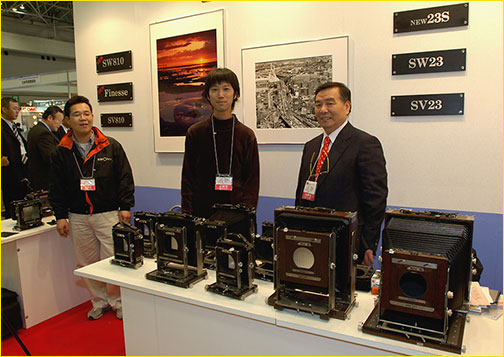 Sigma presented their new 18-200 f3.5-6.3 DC lens. This lens is designed to cover the sensors of APS sized DSLR. The lens will be produced in Sigma, Canon, Pentax and Nikon mounts.

Besides, I could play a little with their yet to be released 30 mm f1.4… I’ll probably get one as soon as it gets on the shelves.

Tokina was presenting their AT-C 124 Pro DX 12-24 f4 lens in Nikon and Canon mounts. It will be interesting to check it against the offers from Sigma and Tamron.

Tamron also was presenting a new DX lens, their “11-18 f4.5-5.6 DiII LD Aspherical (IF) model A13”, they have probably at least manage to produce the longer lens name of history. The lens will be available in Canon, Nikon and Minolta mounts. It is presented by Tamron as the perfect companion for their 18-200.

Sony presented in a remote corner of their booth a prototype of high speed / high quality color printer that is able of producing an A4 print in just 6 seconds. A little bit of banding is visible in the prints upon close examination, but the quality is good nonetheless (the printer was labeled LPR-E5000A).

A few companies were marketing books on demand. Among those, artbook.jp had some very impressive samples on display. They ask about 105 US$ for a 40 page book in 260*260 mm format at their highest possible quality. Prices go down if you order more books. I’ll probably try working with these people soon.

I noticed that Eizo Nanao has virtually stolen the Japanese high-end TFT display scene… 95% of the screens used by other companies for display of images or demo were theirs. Truly amazing. The presence of color management applications and devices was also in very sharp increase compared to the situation just one year ago.

In mid-May 2003 I spent 5 days leading a photographic workshop inDeath Valley, CA. I have shot in Death Valley on several previous occasions during