I’d like to try out an idea on you. You know, kinda throw it at the wall and see if it sticks.

If you’ve studied philosophy or read Nietzsche, you probably had to learn the terms “Dionysian” and “Apollonian.” Those might be very useful terms, if more people could remember what the heck they meant. They describe a classic dichotomy. That’s from the Greekdikhotomos, a splitting in two. Or, as the old joke puts it, “There are two kinds of people in the world. People who always divide everything up into two kinds, and people who don’t.” Ba-dum.

Well, for some time now I’ve been trying to put together a book of amateur color photography culled from web exhibits, so I’ve looked at internet picture sites until I’m bleary-eyed. It occurred to me a while back that I really do see a “split” of sorts operating in the photographic Universe. A real live dichotomy.

I think I have a clear understanding of the two sides of my dichotomy, and I think I can describe what I mean well enough so that you will, too. My problem has been coming up with two good words to call them. Mindful of Dionysius and Apollo, I figured I should used plain, easily-understood words. Where the problem comes in is that there really is no good side or bad side, no right or wrong. Some people tend toward one, some people tend toward the other. I know where I stand, personally, but I didn’t want to slight the opposite approach, either. So I thought that I should try to come up with two terms that I could at least plausibly envision people using as compliments when talking to others of similar taste. The two words I came up with are “tough” and “sweet.”

Now here’s what I mean by them. Of course, being a great one for qualifying, I have to qualify this – these are not opposite camps, not mutually exclusive categories that everything has to be divided up into. They can shade into one another. Nor are any of the descriptive terms I’m using here solely descriptive of one side and not at all of the other. I’m just trying to convey what I mean, not set definitions in stone. The dichotomy is only a generalization, and the descriptive terms are only indications. ‘Kay?So here goes.

Okay. If I’ve done my job here as I intended, you’ve probably already noticed that you’re leaning toward one list or the other – not because the terms on one side are positive and the other negative, but because they express diverging outlooks, one of which happens to appeal to you more. Similarly, if I’ve managed to describe these two divergent attitudes in relatively value-neutral terms, you could imagine either term being used as a compliment or as an insult in different contexts.

What I’d really like to do isillustratethis, of course, rather than talk about it. However, it’s been difficult for me to do this because it takes so long to get permissions from people on picture sites.

So I’m asking for your help. If you have a picture or two, or many, that you wouldn’t mind having published in this space in a few weeks, and that you think is or are either “tough” or “sweet” in one way or another, please e-mail me a link. Alternately, if you can think of another good pair of adjectives that fits in the lists above, let me know. My e-mail address is mcjohnston [at] mac [dot] com. (Please, don’t write it anywhere on the ‘net formatted as an address!)

Here’s one pair of pictures that unambiguously express a tough and sweet split. I don’t have permission to use these, so I’m putting them in this article under the terms of editorial “fair use,” which allows limited use of published pictures for discursive and didactic purposes in non-commercial contexts. If either photographer has any objection at all to their pictures being used here, we will take them down. 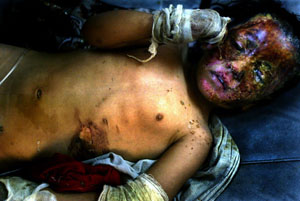 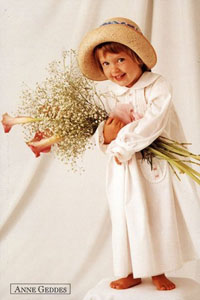 Both are pictures of little girls of about the same age. Both are by famous and successful photographers, who come at the project of photography from radically different perspectives. (The girl on the left, a victim of aerial bombing in Baghdad, reportedly survived.) This is an extreme, stark example, of course. Maybe you have more subtle, shaded examples. I’d like to see! I probably won’t be able to respond to every e-mail, but I’ll read them all. Oh, and don’t send me link to other peoples’ pictures – I’d like to know that I can use the pictures in this column without upsetting anybody. You can send pictures directly too if you think you have a good one that’s not already on the web.

On photo.net, there is a discussion space following this column that people can use to respond or post pictures to.

Anyway, many thanks, and good light,

Mike Johnston writes and publishes an independent quarterly ink-on-paper magazine called The 37th Frame for people who are really “into” photography. His book,The Empirical Photographer, has just been published.

You can read more about Mike and find additional articles that he has written for this site, as well as a Sunday Morning Index.