It isn’t often that one gets to score a "hat-trick" when doing landscape photography. On a cold December 2001 morning atWhite Sands National Monumentin southern New Mexico I had such a morning.

The dunes cover some 275 square miles and are comprised of a very fine white gypsum sand. Be aware that the park is located in the middle of the US military’sWhite Sands Missile Rangeand can be closed at times during test firings. This occurs on average twice a week and can last for one to two hours. It’s therefore a good idea to check with the park service before planning a shoot.

We stayed inAlamogordothe night before our sunrise shoot and had arranged with the park rangers to be let in an hour before sunrise. In the winter the park opens at 7am. This was right at sunrise, making a dawn shoot impossible. An inquiry the day before showed that you can have the rangers open the gates early for a fee of $50 per additional hour requested. 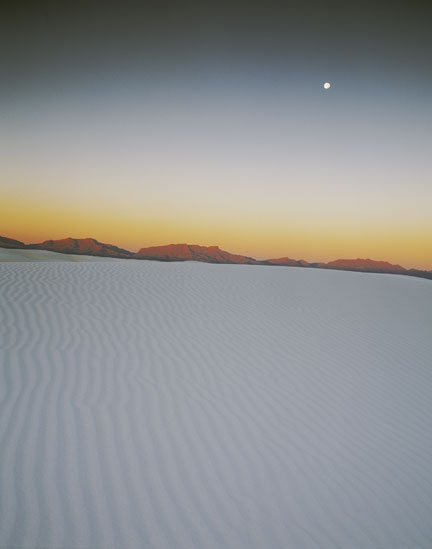 (No, the horizon isn’t tilted. The dune is sloping away to the right and the mountain range is receding as well).

We left our motel at 5:30am and were at the gates 10 minutes early. Promptly at 6am the ranger arrived and let us in. It was a 5 minute drive to the place on the road that we had selected the afternoon before as a likely spot to hike in from. Ten minutes after that we were in the dunes pretty much away from footprints.

As with other popular dunes areas footprints are the major impediment to photography, so it’s necessary to hike far enough from the road to get away from them, or be lucky enough to arrive right after a wind storm has swept them clean.

These three images were all taken within an hour of each other. The one above was the first in the series, takenjustbefore sunrise. The sun rose to my left and had just started to illuminate theSan Andres Mountainsto the west. The moon was setting as we found this first location.

We had planned the combinedBosque del ApacheandWhite Sandstrip to coincide with a full moon‚ at this point about 3 days past full. Though the moon was still fairly high, because I was down in the gully of a large dune I was able to look somewhat upwards, making the moon appear lower. (This actually was the case with all three of these images). The position was a good one because it prevented me from including some messy low hills and scrub brush just over this first dune. Fortunately, though the light level was still low there was enough sky glow to provide some texture to the dunes.

A 2-stop split neutral density filter was needed to bring the exposure for the sky and especially the moon down enough so that they show detail and aren’t blown out. Without one this shot would have been impossible. Though the filter has also caused the upper sky to go very dark, I like the effect‚ it helps "frame" the image. 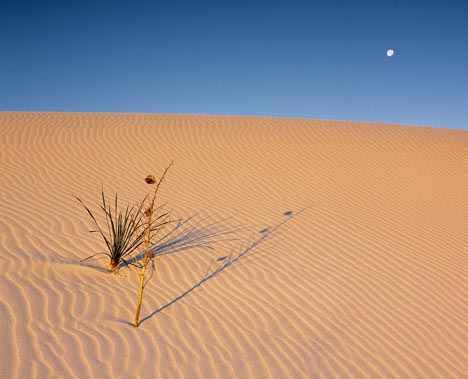 Once the sun crested the horizon the colours changed dramatically for a brief time. The glow of sunrise suffused the sand with a warm golden light. It only lasted for a few minutes but I encountered these plants and quickly noticed that again, because I was down in a valley looking upwards, I was able to incorporate the moon. The use of a split ND filter again helped hold detail in the moon.

You may notice, especially in the larger linked version of this frame, that there are some small shiny spots, especially noticeable along the ridge line. At first when I was "spotting" the image in Photoshop I couldn’t figure out what they were. They I realized that these were sand crystals acting as small but intense reflecting mirrors where the sun was catching them at just the right angle. 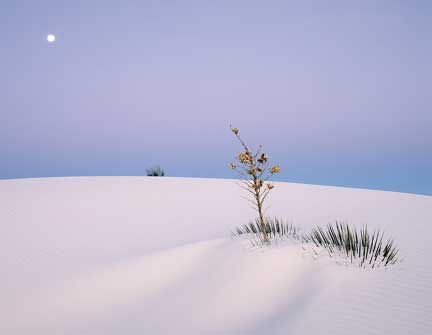 About 20 minutes later when the sun was well up I found this last set-up. Unfortunately, as with the other three images, web representation simply can’t do justice to the subtly and detail to be seen in a print. There is a delicate warm mauve glow to this image that regrettably has not survived net reproduction.

All three images were photographed with aPentax 67 IIand55~100mm f/4.5zoom lens. This trip was my first location shoot with this camera, and its lenses exceeded my expectations. This is an excellent camera for landscape work, combining high image quality with ruggedness and portability.

Our group joked thatWhite Sandsshould actually be calledEggshell White Sands, because the colour isn’t a pure white‚ more of an off-white that you might use to paint your bathroom. Regardless, it’s glaringly white during the day, and wearing sunglass is therefore a must. The sand is as bright as fresh snow.  Of course since the location is in southern New Mexico, from April through October the daytime temperatures are incredibly hot. Bring water, sunglasses, a sun hat and a compass. If you hike a few dunes away from the road it’s quite easy to get lost. There are no landmarks. Be careful.

Keep in mind that shooting atWhite Sandsis just like shooting in snow. This means that between 1 and 2 stops of plus exposure compensation is needed to avoid the sand coming out gray. For more on this see my tutorial onExposing Snow.

Also keep in mind that because the sand is almost pure white it takes on whatever colour-cast the sky provides. This makes early morning and late afternoon the ideal times to capture interesting light effects. Whatever is happening in the sky in terms of colour is reflected onto the sand.

Finally, though the dunes themselves can be beautiful, only very early or late in the day do they have enough texture, due to cross-lighting, for their architectural qualities to be evident. The inclusion of some vegetation can also be very helpful in creating perspective and adding scale to the otherwise featureless dunes.

If you go toWhite Sands,let me knowhow you make out.